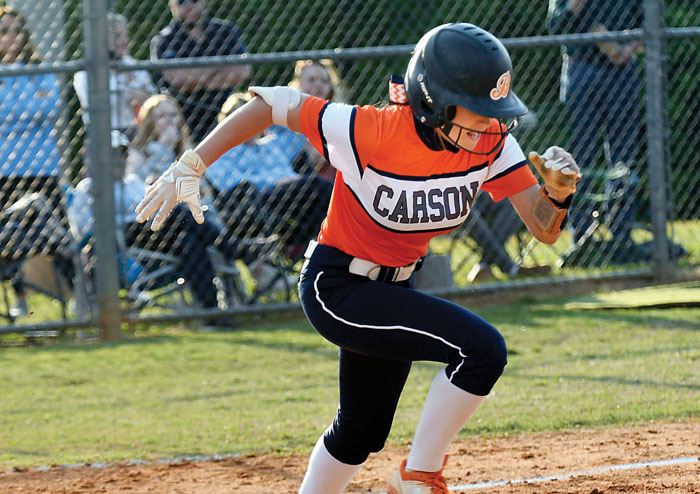 Carson’s Landry Stewart gets a hit during a game against West earlier this season. photo by Wayne Hinshaw, for the Salisbury Post

CHINA GROVE — Landry Stewart’s high school career has been limited by COVID to 21 games, but she’s a Division I commit.

“Six games my freshman year and then we got half a season my sophomore year,” Stewart said. “I can’t tell you how excited I am about my first full season this spring.”

The Carson junior is an early commitment to USC Upstate, a program where former Carson slugger Liza Simmerson is now a freshman. The Spartans compete in the Big South Conference with schools such as Campbell, Winthrop, Radford, Gardner-Webb and Charleston Southern.

While her at-bats for the Cougars have been sparse, Stewart made an impression on college recruiters by playing in tournaments for Lady Lightning Gold and by shining in a lot of camps.

“She does all the right things,” Carson coach Charissa Duncan said. “She’s a tough competitor and she’s just so fast. She has the speed to play anywhere on the field. She had the dream and the goal to play Division I and she and her dad (Shane Stewart) worked hard to make that happen.”

Stewart first made an impression on USC Upstate assistant Bryan Pack, who handles a lot of the recruiting. After she made a connection with head coach Chris Hawkins and fell in love with the atmosphere at USC Upstate, she announced a verbal commitment.

“They recruit athletes and they recruit girls who are versatile,” Stewart said. “It’s the right place for me.”

Simmerson is listed on this season’s USC Upstate roster as a “utility player.” Stewart probably will fall into that category as well, down the road, although she likes the outfield best.

“She’s not afraid to dive, she tracks flyballs well and she’s got the arm strength, so she can be exceptional in the outfield,” Duncan said. “But she also could play shortstop. She’s aggressive in the infield and she’ll attack the ball.”

Stewart has a fast-talking, bubbly personality to go along with the sort of wheels that get people excited. Softball speed makes an impact offensively and defensively.

At the plate, Stewart has made the conversion from right-handed hitter to left-handed slapper to take advantage of her running ability.

“I’ve got the short game down,” Stewart said. “I’m working now on making the harder slaps, being able to hit line drives through the infield or over the infielders.”

She batted .368 as a Carson freshman and scored five runs in six games. As a sophomore, she batted .356 and scored 14 runs for a 12-3 team. She figures to be an ideal leadoff batter for Carson for the next two seasons.

Stewart is the younger sister of Rylie Stewart, the pitcher who got on an amazing roll and sparked Carson to the Final Four in the spring of 2018.

“I didn’t miss any of those games,” said Landry, who was a seventh-grader at China Grove Middle School.

Middle school was the turning point in her athletic career. She’d been a catcher for most of her life, but China Grove needed a shortstop, so she played there.

“That’s when people started realizing I was pretty fast,” Stewart said. “Things took off from there.”

Duncan says Stewart was just starting to figure everything out late last season when it ended for the Cougars in the second round of the 3A state playoffs.

“She was peaking and was one of our best late in the season,” Duncan said. “She can be a very special player.”