Gotta Run: For Moreau, running is nothing new 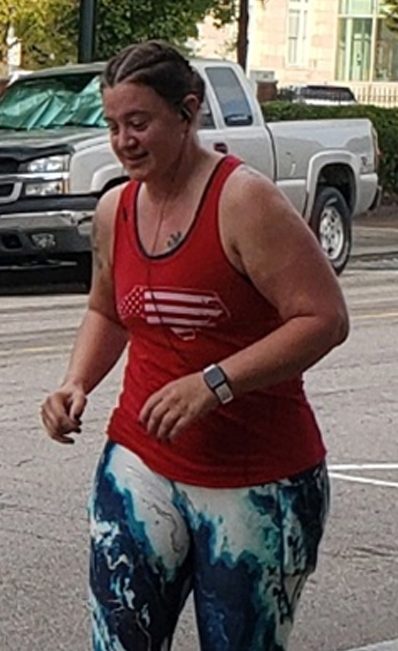 I met Salisbury Police Sgt. Jennifer Moreau when she took our beginning runners class. The police department has been partnering with SRR and Salisbury Parks and Rec to offer the most recent classes, and Moreau took advantage of the opportunity. She is also part of the committee that approves our local race permits.

But running wasn’t new to Moreau.

“I was active duty Air Force, serving at Edwards Air Force Base in the Mojave Desert. The fitness test had just changed from the old ‘bike test’ to pushups, situps, running 1.5 miles, and body composition measurements,” she said. “I was 22 years old. Most bases didn’t have any running tracks yet.”

That was how Moreau got started, but more importantly she expressed great reasons to continue, “Partly because I am still in the Air National Guard and have annual testing, but mostly for my health and my family. I want to be around for my daughter, but I also want to be able to move around! My grandmother had a blood clot in her 70s that got into her lung and she kept saying “I can’t because of my lung.” She lived to be 88, but why stop there? How would her quality of life been if she had said “It’s hard, but I’m going to try?”

At the PD, she’s been busy.

“I was on patrol for a few years, as well as the street crimes unit where I did gang investigations. Now I am in the Administration Bureau where I manage a lot of programs such as permits, the vehicle fleet, School Resource Officers, the evidence section, new recruit training, events & permits, and all our equipment,” Moreau said.

For hobbies and other interests, Moreau said, “I love being outdoors, beaches, mountains, lakes, rivers. I am a supporter of true camping — in a tent, fish for your dinner, campfires and marshmallows. Trail running keeps me from being bored and I have run a small portion of the Appalachian Trail in NC. I love to cook and do front step container gardening so I have herbs to use in cooking almost year round. I’m always taking classes and reading. I like to kayak and explore, as well as finding those obscure places like the last-in-the-world clamshell-shaped gas station from Shell Oil, which is in Winston-Salem, NC! I enjoy participating in all forms of art, from window painting, murals, sketching and I even do calligraphy. It is as soothing/calming as yoga and has many other benefits. I started calligraphy in high school, learning about the transcription of the U.S. Constitution, and it taught me patience — which most people wouldn’t think was related to something like fancy writing!”

Moreau’s family, including her dad, stepmom and older brother, all live in Rhode Island. Here, she’s at home with daughter, Alexia, who’s in high school. They also have two dogs and cat. Moreau added, “I constantly nag Alexia to come run with me.”

Moreau is currently getting back on track after having COVID. Her best moments in running so far include reducing her pace to an 11-minute mile after past injuries like a broken tailbone, two sprained ankles and more military related issues, plus turning 45.

When asked about how she arrived in Salisbury, Moreau said, “I have lived all over due to military life. When I decided to switch to the Air National Guard in October 2006, I stayed with a friend in Canton, N.C., while I searched for the best place to settle down. After six months, I found Salisbury and the perfect home to raise Alexia. We have lived here ever since.”

Other upcoming events are at www.salisburyrowanrunners.org