SALISBURY — The Rowan County Planning Board’s meeting extended late into the night Monday as it heard speeches and presentations about a major solar energy project planned in Gold Hill.

Charlotte-based Birdseye Renewable Energy has submitted a proposal to develop a 69-megawatt utility scale solar energy facility on a roughly 574-acre plot of land near Old Beatty Ford Road and U.S. 52, not far from the Gold Hill Airpark. The proposed project has been met with fierce and organized pushback from Gold Hill residents, particularly those who live and fly at the private airpark. After Birdseye held community meetings in Gold Hill in June, residents convened at the Gold Hill Fire Department in August to rally opposition to the project.

The specific purpose of the meeting to consider a conditional district rezoning request from Birdseye, which is required in accordance with updated solar energy system rules and recommendations passed by the Rowan County Board of Commissioners earlier this year.

As the clock struck 10 p.m., the Planning Board considered recessing and hosting a special called meeting in two weeks. However, a motion to do just that did not pass unanimously and the board eventually decided to finish the meeting. The meeting was still going on at press time on Monday.

Brian Bednar, founder and president of Birdseye, was first to speak during the meeting. Bednar talked to the board about his involvement in solar project discussions in Rowan County dating back a decade and mentioned the company was involved in the development of the county’s updated rules on solar energy systems.

Landon Abernethy, director of development for Birdseye, followed Bednar and spoke about the merits of the solar farm. Along with touting the $2.5 million in tax revenue the project would generate for Rowan County over the next 40 years, Abernethy detailed steps Birdseye has taken to adjust its proposed project to meet concerns voiced by citizens of Gold Hill. Abernethy said the company has beefed up its screening requirements and pulled the project back from U.S. 52 to ensure that the project doesn’t diminish the natural view from the road.

Abernethy also spent several minutes addressing concerns over aviation safety. In addition to conducting a glare study, Abernethy said Birdseye has consulted with pilots and flight instructors to investigate any potential threats to aviation. The results of that research, Abernethy said, were that there was no “credible claim to danger” to aviation in the area. Additionally, Abernethy said the company would comply with the five recommendations for the site provided by the Rowan County Planning Department staff and has already submitted a decommissioning plan it would update before construction starts.

Abernethy said the project would take about 12 months to construct and that there would be about two or three months of high impact construction.

Susanne Todd, a Charlotte-based land use attorney advocating for Birdseye, delivered a short presentation and asserted the solar farm meets all of the county’s land use recommendations.

The opposition to the site was led by Gold Hill Airpark resident John Ritchie, who has been a vocal critic of the site at previous meetings. Ritchie summarized many of the concerns numerous Gold Hill residents voiced during the meeting, including apprehension over the solar farm’s impact on property values, natural habitat and wildlife, the town’s tourism industry and reputation and aviation safety.

Additionally, Ritchie contradicted Todd’s statement that the solar farm complies with the county’s land use plan and said he believed that it violated at least five recommendations.

Ritchie was followed by more than a half-dozen residents who touched on those concerns and others. Several residents commented that the solar farm had the potential to destroy the community. Darius Hedrick, who has led historic preservation efforts in the town, decried the impact the solar panels would have on the town’s tourism industry.

Jonathan Featherstone, a big animal veterinarian who grew up hunting where the solar farm project would be located, showed the Planning Board pictures of his family hunting near the land. 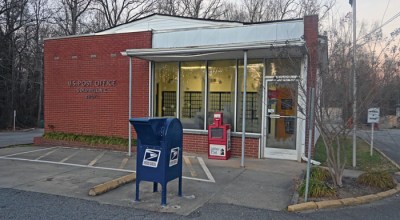