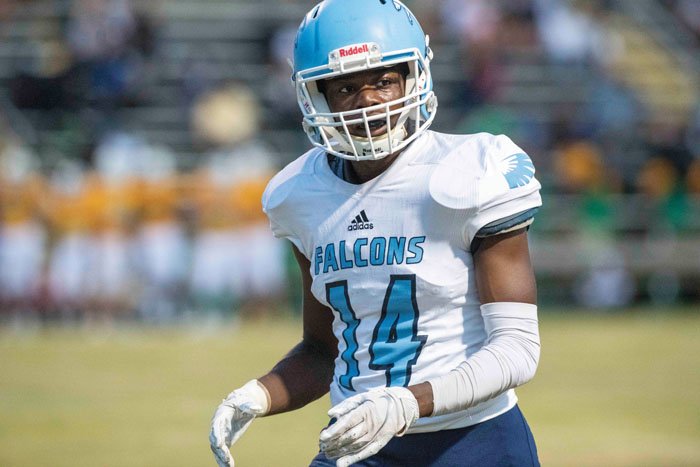 CHINA GROVE — There’s no need to start printing playoff tickets, but the West Rowan football team is beginning to look like a post-season contender.

After dropping their first two games, the Falcons have regained traction with two straight victories — including Friday’s 49-14 romp at Carson in their SPC opener.

“I knew we’d play well. I didn’t think we’d play that well,” surprised coach Louis Kraft said after West (2-2, 1-0) prevailed with a modicum of difficulty. “I think my staff and players knew what we were capable of, and it was good to put that on display tonight. Carson’s a well-coached team but I think we handled them pretty well.”

They manhandled the Cougars (1-3, 0-1), driving for touchdowns on six of their first eight possessions and limiting Carson’s high-octane option running game to 55 net yards.

“We just had to play contain and work as a team,” defensive tackle Xavier Harrell said after Carson was held to 131 yards total offense — and just 40 in the second half. “Every time we made a mistake, we fixed it. We stayed straight. Now Carson, they have my respect, but this was an easy win.”

And a disappointing loss for the hosts, who never got untangled after taking a 7-6 first-quarter lead.

“That’s not what we expected,” said CHS coach Daniel Crosby. “Give credit to West Rowan. They were a lot more physical than we were. End of the day, they stacked the box on us and we couldn’t throw it.”

West did. Starting quarterback Noah Loeblein added to his glowing list of achievements by passing for 215 yards and three touchdowns in about two-and-a-half quarters of duty. He took a seat after the Falcons mounted a 42-7 third-period lead on a 50-yard TD pass to wide-open wideout Peter Williams-Simpson. Reserve Lucas Graham impressed in a mop-up assignment, guiding West’s last four drives and directing a seven-play, 63-yard scoring march that closed the scoring.

“Lucas sees the field really well,” Kraft said after the junior completed six of 10 passes for 58 yards. “Noah’s got a little more arm talent than he does, but I really look forward to him being the guy next year.”

Williams-Simpson finished with four receptions for 166 yards, with 80 of them coming on an over-the-middle catch and run that opened the scoring with 2:33 to play in the first quarter. Carson counter-punched when senior quarterback Hunter Burris hit Jay Howard with a 63-yard TD pass with less than a minute remaining in the period. The game turned in the second, when West scored three touchdowns in less than six minutes and took a 27-7 halftime edge.

“We stepped on the gas and never let up,” said Loeblein, who completed seven of 12 attempts and threw a first-quarter interception. “We beat them with coverage and speed. The touchdowns to (Williams-Simpson) came on play-actions, when we brought the safety down and he just beat the cornerbacks.”

Williams-Simpson, one of the county’s elite receivers, was quick to credit others. “I’ve got the best quarterback in Rowan County,” he nodded after West amassed 385 total yards. “And an outstanding offensive line.”

Still, it took more than that to quiet Carson. West’s defense played its best game of the season, limiting the Cougars to four first downs and forcing nine punts. “We stopped the run, stuffed the middle and hustled to the ball,” said West defensive end Landon Jacobs. “That tells you West Rowan is still here and we’re all working hard.”

It has sparked a turnaround the Falcons hope will carry them through the conference season.

“We’re coming back,” crowed two-way lineman Quentin Lofton. “The first two games, we had a bit of a downfall. Now we’re all on the same page. Once we were here, always worrying about ourselves. Now we’re a team.”

A team that Crosby believes played to its strength.

“With the style of offense we play, we know teams are going to stack the box,” he said. “And they did. They’ve got big guys who are physical up front and fast. We didn’t sustain blocks and didn’t execute when we needed to. But our kids faced adversity and kept fighting.”

Is West a team that can’t be ignored in conference play?

NOTES: Williams-Simpson made three TD grabs and leads the county with seven touchdowns. … West punter Ben Sweet suffered a left ankle injury in the first quarter and never returned. Kicker Juan Artega handled the punting responsibilities and averaged 31 yards on three boots. His fourth attempt was blocked and recovered in the end zone by Keegan Barger for a Carson touchdown with 5:52 to play. … Two-way lineman Josh Noble had a cast and sleeve on his injured right wrist and played sparingly on offense only. … Burris, who had passed for 58 yards in Carson’s first three games, was 3-for-9 for 76 yards and a TD. … Rowan-Salisbury Schools Superintendant Tony Watlington was part of a boisterous crowd. … Before the game, the Cougars honored the 13 U.S. service members killed in the Aug. 26 attack in Kabul.