Rowan-Salisbury Schools gets back to work creating K-8 facility 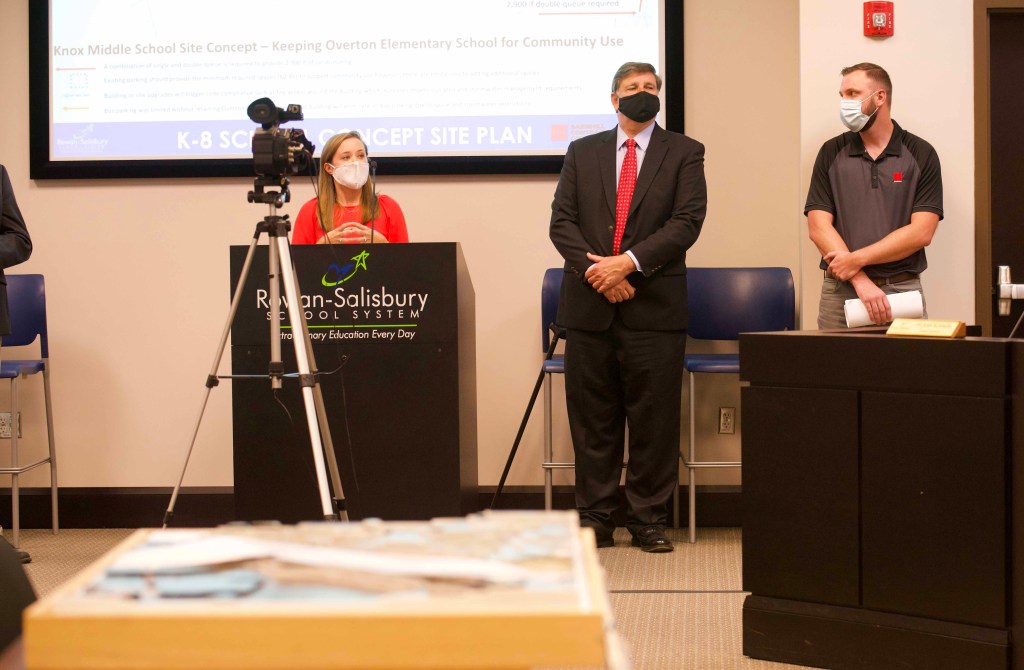 Carl Blankenship/Salisbury Post - The K-8 project was placed on hold more than a year ago after funding was frozen. Pictured left to right are LS3P architect Ginny Magrath, RSS Chief Operational Offier Anthony Vann and Barnhill Contracting Preconstruction Manager Eric Pond. A model of the site is in the forground.

SALISBURY — After being on hold for more than a year because of frozen funding, Rowan-Salisbury Schools has resumed work on a combined K-8 facility to be located in Salisbury.

The new facility will be built in the area between Knox Middle School and Overton Elementary School. Funding for the project, estimated to be about $55 million, was frozen by the Rowan County Board of Commissioners amid economic uncertainty of the COVID-19 pandemic. With the money now unfrozen, Rowan-Salisbury Schools is forging ahead with design and a construction completion date in summer 2024.

The basics of the project have not changed. It will be a 155,000-square-foot school that will host about 1,000 students from Overton and Knox. It will have the ability to serve up to 1,200 students.

The original plan was to demolish Knox and Overton after students moved into the new facility, but district administration asked project architect, Charlotte firm LS3P, to create a plan that would keep the Overton facility in addition to the original plan to demolish both old schools after construction finished.

Board member Alisha Byrd-Clark brought up a pair of concerns: the possibility of keeping Knox’s gym and separating the entrances of the connected girls and boys bathrooms.

Architect Ginny Magrath said it would be difficult to keep the gym and that there are other considerations, including connections to the Knox campus that would be severed as part of the demolition process. The bathroom entrances can be modified, but there are other schools in the district with similar bathroom entryway designs.

One consideration for keeping Overton is being able to fit a properly sized baseball field in the area.

Chief Operational Officer Anthony Vann said the consideration to keep Overton was based on possible future uses such as a location for Summit Virtual Academy.

Superintendent Tony Watlington offered some other unique ideas to consider for the school: transforming Overton into a school with no attendance boundary that could serve as a magnet school or offer alternate education models. He also posited using the facility for programs to draw in non-RSS students, including those in homeschool. He said many homeschool families are looking for a hybrid model.

Watlington told the board it did not need to make a decision on Monday, but he asked the board to consider keeping the facility.

Board Chair Kevin Jones said RSS should at least consider keeping the facility.

Board member Travis Allen said he sees retaining Overton as a hard sell to the public because the district closed Woodleaf, Cleveland, Faith and Enochville elementary schools with no intentions to repurpose the facilities.

Board member Dean Hunter agreed with Allen and noted the district has far more facilities than it needs.

Watlington said he came to the conversation about consolidating schools as an outsider and that the district could lose students by retiring facilities to save on operating costs, which then has an impact on the district’s budget.

The board accepted the presentation as information, with no vote on the matter.