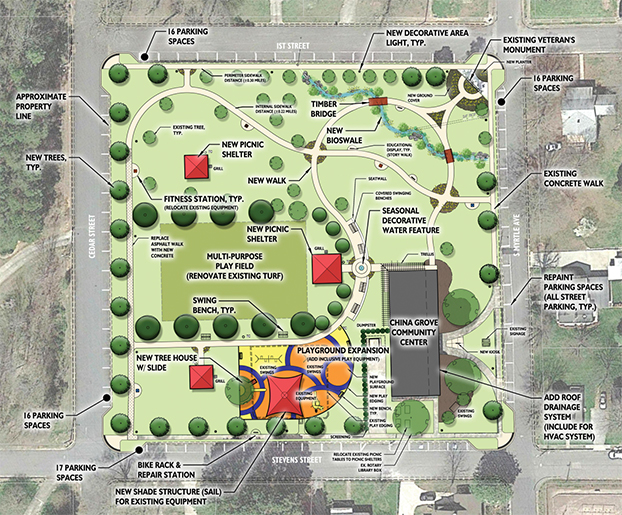 The plan for redevelopment of China Grove's Community Park that was adopted by town leaders on Tuesday night. Rendering submitted.

CHINA GROVE — The Town Council is moving forward with plans for the redevelopment of Community Park.

Located along South Myrtle Avenue, the park currently features a playground, an open field, a memorial for veterans, walking trails and the recently renovated Community Memorial Building. The park is roughly 3.6-acres and is within walking distance of both China Grove Elementary and downtown.

China Grove’s leaders have been gathering input from citizens about potential upgrades to the park since early 2020 and on Tuesday night were presented with a park master plan crafted by Alfred Benesch and Company, a Chicago-based design firm with an office in Charlotte.

The master plan calls for $1.5 million in renovations to the park, including the installation of three picnic shelters, additional playground equipment such as a “one-of-a-kind” treehouse and a seasonal water feature, as well as more shade, seating and sidewalks.

The master plan was crafted with community input gathered from 87 citizens during two separate in-person workshops and through a survey posted to the town’s website and handed out to park visitors.

“This park is a development of what the people in China Grove have said that they want to see out of this area,” Mayor Charles Seaford said.

The top priorities for the park as determined through the workshops and survey:

The master plan seeks to accomplish all of those objectives.

The playground, which is the most popular activity in the park, will be expanded with new equipment, including a tree house-like structure that will have a slide. A new shade structure will be installed above the majority of the playground equipment and large shade trees will be placed around its perimeter. The playground’s current wood fiber surface will also be replaced with rubber to promote safety and better drainage.

A seasonal water feature will be added to the center of the Community Park. The feature, which will give kids a place to cool off in the summertime, will be visible from three sides and can be lighted at night to add visual effect, similar to the lights on the water wall at Bell Tower Green in downtown Salisbury. It has not yet been determined if the water in the feature will be recirculated. While a recirculated system is more expensive up front, it can lead to long-term savings.

The existing playfield in the park will be transformed into a roughly 15,000-square-foot “attractive multi-use greenspace” that will be suitable for everything from youth soccer games to frisbee or cornhole.

The park’s overall landscaping will be bolstered with the addition of new trees and shrubbery. A small creek will be added for both visual effect and to promote better stormwater drainage.

The new features of Community Park will be connected by an improved sidewalk system. Along the sidewalk there will be shaded swinging benches and a “story walk,” which promotes both exercise and education.

The Town Council voted unanimously to adopt the park masterplan on Tuesday night, but did suggest one change. Instead of placing one of the picnic shelters near the water feature, the council told the park’s designers that it would rather the shelter be further away.

While councilman Don Bringle said the masterplan for the park “looks good on paper,” he emphasized that the town will still need to figure out how it will afford the project.

“With the estimated cost we saw (Tuesday) night, we need to come up with a funding mechanism,” said Bringle, also the parks and recreation director for Rowan County.

The town could receive funding in the form of a grant from the North Carolina Parks and Recreation Trust Fund. Since the PARTF grant matches municipal contributions dollar-for-dollar up to $500,000, China Grove would need to determine where it would get the matching funds from before it applies.

The next application period for PARTF grants opens in the spring of 2022. Grants are typically awarded the following fall. Bringle said the town will also explore grant funding from other foundations and organizations.

With funding still uncertain, Bringle said the council will need to prioritize the proposed features and develop the project over several phases. Rowan County is taking a similar phased approach in the development of the Woodleaf Community Park.

Although the Community Park improvements likely won’t be complete for several years, enthusiasm is already building.

“I’m excited to see us be able to look at this,” Bringle said. “As our town grows, we’ve got to not only look at this park, but look at other areas in our community to build out for citizens to use.”

The China Grove Town Council met in-person on Tuesday night, but Seaford said the town is considering holding its next meeting (scheduled for Oct. 5) virtually or with a virtual component due to the COVID-19 case numbers in Rowan County.