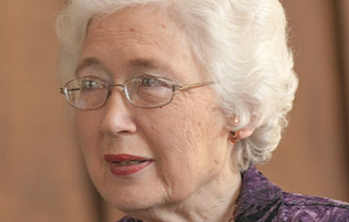 West was a Catawba graduate of the class of 1959. She supported the college’s music program, teacher education, campus ministry, science program, the football team, chiefs club and renovation projects.

“We are deeply saddened by the passing of Martha, a dear friend and loyal supporter of Catawba College,” Catawba President David Nelson said. “Martha always had a smile and good word for everyone. Many at Catawba have and will continue to benefit from her generosity and insights about life.”

West was the daughter of Catawba Coach Gordon Kirkland, who lead the college to multiple football conference title. West grew up on the Catawba campus and would eventually become a faculty member. She married the late James King West, who served for 22 years as a professor of religion at the the college.

An honors student at Catawba, West majored in English and minored in history, and served as the editor of the college’s student newspaper. She went on to earn her master’s of education degree and her Ph.D. in elementary education from the University of North Carolina at Chapel Hill.

West served as a professor of teacher education at Catawba for 16 years, from 1965 until 1981. She founded the children’s author project, collaborating with Rowan-Salisbury Schools and Rowan Public Library.

The program thrived for more than 25 years, bringing many Caldecott Award, Newberry Award, and Coretta Scott King Award winning children’s book authors to the community. Dr. West later donated a large collection of children’s books, autographed by their authors, to Catawba College’s Corriher-Linn-Black Library. She was also one of the writers of Catawba’s sesquicentennial history book, A College of Our Own: The First 150 Years of Catawba College, published 2001.

In 2011, she received Catawba’s highest honor, the Adrian L. Shuford Award. She also received the Distinguished Alumni Award in 1992, given annually by Catawba’s Alumni Association, to recognize individuals who have served their community, distinguished themselves in their profession, and have served the Catawba College community. When Catawba established its Shirley Ritchie Academy for Teaching in 2007, the scholars of that academy were named the Martha West Scholars in her honor.

In the Salisbury community, she served as director of elementary education for the Salisbury-Rowan Schools for 17 years. She retired in 1999 and then served four years on the Rowan-Salisbury School Board, two years of which was in the role of vice-chair.  She was a member of the Salisbury Symphony Board, serving two years as its president, the Rowan Museum Board, and board of the Salvation Army and served on the session, and as a member of the choir at her church, John Calvin Presbyterian.

In 2016, she was honored by in the community by Smart Start with the Shirley P. Ritchie Champion for Young Children Award.