‘A magic touch’ — Barbara Rufty was a constant encourager for family, customers 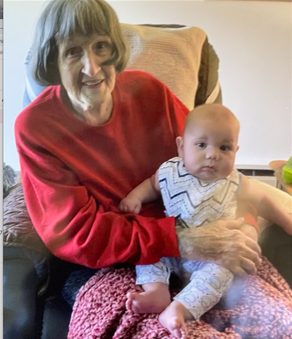 SALISBURY — Barbara Rufty never met a project she didn’t like.

Whether it was coming up with new Christian symbol designs at Rufty’s Chrismon Shop or baking 70 pound cakes for the East Rowan Marching Band or pulling mints during the holidays or supporting her five children in whatever growing-up activities they chose.

From athletics to academics to dance to music to crafts, “she was right there,” said her oldest daughter, Cathy. “There was 100% support around anything we were doing.”

Barbara, the mother of five, grandmother of nine and great-grandmother of four, died Aug. 20 at age 91. Her funeral was Friday at St. John’s Lutheran Church. Along with Cathy, her children are Bonnie Emerson, Melonie Beaver, Oscho Rufty, and Barbara Parker.

Barbara had only stopped working at the shop two years ago, when she was 89.

Barbara was named the student with the most school spirit in Boyden High School’s Class of 1948. For years, she and Bill Safrit planned their reunions.

“She was a hard worker and a good leader, too,” Bill said last week. “She would make phone calls like crazy. She was a wonderful person.”

Along with Harry Agner and Nina Jo Kirk, Bill is one of three local surviving members of the class.

Melonie Beaver worked with her mom at Piedmont Garden Supply beginning in 1979. Barbara transitioned to the Chrismon Shop in the ’90s. Before orders went online, Barbara got to know customers — mostly women — all over the country by phone, her daughter said.

“They told her their life history over the phone,” Melonie noted. “She helped them through their problems as well as any help with the Chrismons.”

In preparation for this story, Melonie called several longtime customers, and they all called the Post immediately, clamoring for the opportunity to speak about their friend.

Kim Peeler Yucha grew up with Melonie as their families were members of St. John’s. Her parents are Ermine Peeler, who turned 99 on Aug. 15, and the late Herman Peeler.

“The Ruftys and the Peelers grew up a block from each other,” Kim said. “I knew about Chrismons when I was growing up. I came back for a class, and I got addicted.”

Kim has been making Chrismons for 20 years. She distributes about 100 each year to the children in her congregation, Epiphany Lutheran Church in Richmond, Virginia.

“I have loved Miss Barbara and Melonie’s designs,” she said. “It’s such a great ministry because it brings in the love of Christ and the love he has for his flock. Miss Barbara was a great Christian woman who lived out the life of Christ in all she did.”

Carol Hair leads the Chrismon Ministry Team at St. John’s. Each Christmas, they make 200 Chrismons for the children of the congregation. Those left are given to homebound members the next year. She remembered Barbara as gentle and friendly.

“We get all our supplies from Rufty’s Chrismon shop,” Carol said. “We’re already thinking about Christmas.”

Mary Wiley lives in Huntsville, Ala. She has also been making Chrismons for about 20 years.

“I called many a time to order and talk to her,” she says. “They were certainly an inspiration to us.”

Once, when her son was working in Salisbury, she had the opportunity to meet Barbara and Melonie.

“I admired Barbara,” she said. “The beads were certainly the best you could find. It was a privilege to meet her in person.”

Ruth Ann Leach started making Chrismons in 2013 at a church in Lake Worth Florida. She now lives in Pennsylvania.

“I knew zip about Chrismons,” she said. “I did a lot of research and learned about Rufty’s. I met Barbara on the phone. She became a tremendous phone friend. She was always warm and helpful. I loved hearing her sweet voice on the phone. Her beads are superior to anything you would buy at a local craft store. The Chrismons I made in 2013 still look just like knew.”

The Chrismons, Ruth Ann said, “are how Barbara showed her love for her Lord and Savior.”

Dr. Cathy Buttke is a veterinarian in Sophia. She took a Chrismon class in Greensboro and knew that Rufty’s supplied the beads. She visited the shop a couple of years ago.

“They have so many kits,” Buttke said. “It’s pretty incredible.”

Over the years, she’s made Chrismons for four different churches, including the church where she grew up in Bowling Green, Kentucky, and congregations in Archdale and High Point. Cathy’s sister and niece came from Bowling Green to Salisbury to take a class. So even though Cathy didn’t take a class directly with Barbara, she knew who Cathy was.

“My niece commented that she sure enjoyed taking Miss Barbara’s classes,” Cathy said. “She knew you were guaranteed of several things: that you’d hear a Bible story because the Christian symbols are based on stories from the Bible, you’d have fun and learn new skills, and that you’d have pound cake.”

During Chrismon workshops, Barbara would bring a chocolate pound cake and a vanilla pound cake each day. There was also pound cake over the holidays, complete with Russian tea, which Barbara also made.

Of Cathy’s own experience with Barbara, she said, “She was patient. She knew what she was talking about. She could adapt her teaching you how you learned.”

Over the years, Cathy Rufty said, her mother adapted her own life, too.

“She would remake her life depending on the circumstances she was in,” she said.

Cathy said that her mother didn’t think of herself as a smart person. When she and her siblings were growing up, she never saw her mother pick up a book. Yet when Barbara became a caregiver for her late husband, Harold, she became an avid reader when her activities became limited.

As Barbara got older, her high school class, her cardiac rehab group, and her bridge club also became more important to her, Cathy said.

When she experienced health challenges in recent years, her daughter said, she again adapted, learning to play solitaire on the iPad and knitting mittens and hats for nearly all of her family members for Christmas. She also made some cross-stitched quilts for her great-grandchildren and those who will come later.

When she couldn’t stand for long periods, she’d pull a stool near Cathy, to supervise her when she made pound cake or pimento cheese or nuts and bolts.

“She said I did fine, but that was just her encouraging spirit,” Cathy said. “Nothing I made tasted quite the same as Mom’s. There was some magic touch that she had.”