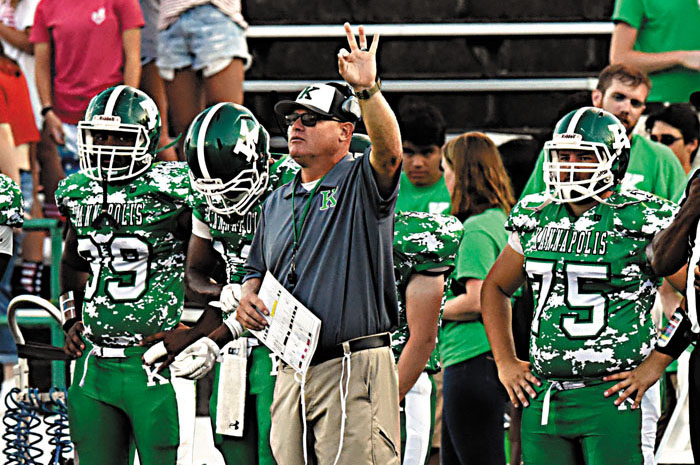 KANNAPOLIS — A.L. Brown won thrillers against Cox Mill and Central Cabarrus and ran the table in a 3A league with its Cabarrus neighbors back in the spring, but now the Wonders face a new challenge.

Its a return to 4A for the Wonders, but not a return to Charlotte. The Greater Metro Conference is a new, seven-team league consisting of the larger Cabarrus schools and Iredell big boys Mooresville, Lake Norman and South Iredell.

“This new league may not have the heavy hitters like Mallard Creek, Hough and Vance, but those Charlotte leagues we played in always included teams we felt like we were going to beat,” A.L. Brown head coach Mike Newsome said. “The league we’re in now, though, everyone can play. Every game will be a game. I don’t see any games where we’re going to be able to play the backups in the fourth quarter. It’s a tough league, and who wins it is going to be who stays the healthiest. Kids are at risk of getting hurt. The team you start the season with and the team you enter the playoffs with probably won’t be the same team.”

Newsome obviously is concerned about the injury bug and with good reason. The Wonders are thinner than normal — and will have more guys playing both ways than normal. And when you lose one of those two-way guys it’s a double hit on the depth chart.

Newsome said the Wonders have 80, maybe 85, in the program, as he wasn’t sure of the latest jayvee tally. That’s down quite a bit from the peak days.

“And I orry about our jayvees,” Newsome said. “We didn’t have a middle school season last year (due to COVID).  A lot of those kids haven’t played any football in two years.”

A.L. Brown lost the player who was expected to lead the offense, with veteran QB Cameron Kromah transferring to Independence. Newsome is confident the Wonders can move on from that unexpected subtraction. New QB Joey Vanover has taken plenty of practice reps and has been in the program for years, but he threw only five passes last season. He lacks game experience. He’ll get it quickly. The Wonders will take on North Meck, Rocky River and Sun Valley before they start Greater Metro play.

Jaden Johnson has good size and speed and could be the featured guy on offense as the “Wonder back.”

“He’s a multi-purpose guy who can run it and catch it,” Newsome said.

Jamel Cosby got 20 carries and scored a TD in the spring and has some running back experience. The ballcarriers also will include two youngsters who had a handful of varsity carries — Elijah Lawson and Kash Smith.

Tight end Gavin Thompson caught a TD pass in the Robinson game and started late in the season.

Sophomore receivers Derick Brazil and Xavier Chambers are expected to be major factors.

There’s a tough group of offensive lineman on board, headed by Erwil Anthony, Javaryon Bruton and Noah Rich.

“Those are really good players, but we’re very thin on the lines,” Newsome said. “We’ll also need those three on the defensive line. We’ve got some other good guys we’ll be getting up to speed. We’ve got to develop some depth there.”

Ty Woods returns as the kicker and punter after turning in some game-deciding boots in the spring.

“He was an All-State punter and he continues to improve,” Newsome said.

The linebackers should be the Wonders’ best position group. They’re the most experienced and the most talented.

N.C. State commit Torren Wright (6-foot-3, 215 pounds) is regarded as a top-10 prospect in the state and a top-30 linebacker nationally. Antarron Turner is a bookend physically for Wright and could be just as productive. On the inside, Ja’Lan Chambers has played a lot of snaps, while Brock Morgan is an experienced backup who gets a chance to shine.

The secondary will be green —  no pun intended.

“It’s an all new group, but we believe in their athletic ability,” Newsome said.

Keidren Lott and Louis Segreti are expected to be the starting corners, with receivers Xavier Chambers and Johnson manning the safety spots.

Veteran Trent Thompson has been out since a summer knee injury, but the Wonders hope to get him back before conference play starts.

Thompson is one of five Wonders who are sidelined at this point. For the Wonders, more than ever, it’s going to be about staying healthy.

“If we don’t get hurt, we can be pretty good,” Newsome said.

The Wonders will have an exciting finish to the 10-game regular season.  They were able to work out playing the non-conference game with Concord on the final Friday.