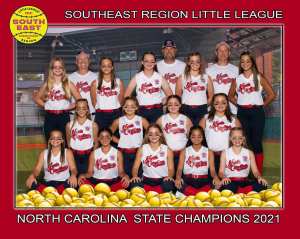 GREENVILLE — Eva Shue drove in all four runs as Rowan Little League beat Nevada 4-1 on Sunday night in the 12U World Series.

Rowan Little League was scheduled to play at 1 p.m., but it was a tumultous day marred by rain and lightning delays and with a positive COVID test knocking New York out of the World Series.

Rowan led 2-0 against Nevada, a regional champion, when weather halted play in the second inning. Rowan got back on the field at 8 p.m. and was able to finish off its third victory in four pool-play outings.

Poole allowed four hits and four walks, but held Nevada to one run. She struck out seven. In the fourth inning, Nevada had four baserunners with a hit, two walks and an error, but could only get one run. Another runner was out at the plate.

With a 3-1 record, Rowan finished second in the Jessica Mendoza Pool behind Oklahoma.

Oklahoma went 3-0 in pool play, including a 10-0 win against Rowan.

Oklahoma’s scheduled game on Sunday against Indiana was canceled after the weather delays. Oklahoma already had wrapped up first in the pool and Indiana could not have advanced to the next round even if it had won.

With New York ousted from the tournament, its scheduled game with Virginia was declared a forfeit win for Virginia.

Arizona was winless in pool play, but replaces New York in the quarterfinals.

Three teams in the Jennie Finch Pool went 3-1 — Virginia, Missouri and Texas. Texas was seeded third out of that pool.