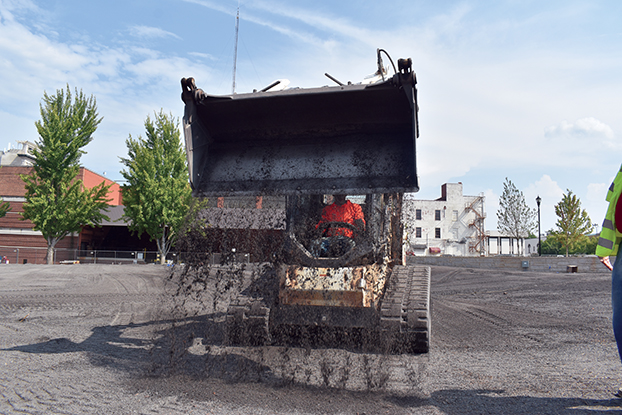 A load of Stalite PermaTill mixture is dumped onto the event lawn at Bell Tower Green Park. The sea of gray has already been covered by grass, which will spend the next three weeks digging its roots deep into the gray mixture. Ben Stansell/Salisbury Post

SALISBURY — No, that wasn’t gravel being dumped into Bell Tower Green this week.

A mixture of Stalite PermaTill, organic matter and sand will serve as the base for one of the park’s most widely used features — a lush green lawn in front of the stage for people to gather during concerts and performances. With thousands of feet likely traversing the large lawn every year, the gray mixture will be a critical factor in the grass being able to withstand the trampling.

Produced by Salisbury-based company Stalite, Stalite PermaTill is an expanded slate lightweight aggregate made from rock mined in the Gold Hill quarry and heated at extreme temperatures to create small air pockets. It’s sold in 40 pound bags in garden supply stores across the country, but it took 41 truckloads to deliver 1,000 tons of the mixture to Bell Town Green.

The first 2 inches of material applied to the park was Stalie PermaTill, which was tilled in with the existing clay to create a bed. No less than 8 inches of the Stalite PermaTill mixture (three parts Stalite Permatill, one part sand and organic matter) was poured on top of that to create a growing medium for the lawn.

Landscaping crews at the park used a front loader to disperse the mixture evenly and then flattened it with a roller machine to ensure the lawn will be devoid of any holes.

The lightweight, expanded aggregate will allow the Bermuda-hybrid grass planted on top to spread its roots deep underground, providing the grass protection from extreme heat and helping it stay rooted despite wear and tear.

“Let’s say there’s a big wedding and they put up a tent, no matter what you set on that grass, it’ll hold up to that abuse,” said Dyke Messinger, president of Bell Tower Green.

The aggregate also provides for better drainage, meaning the event lawn can be used more quickly after a shower.

“What we’re doing here, and what we’ve done at other locations around the state and country, is creating a matrix for these roots to grow in so you can use this immediately after a rain,” said Chuck Friedrich, Stalite’s environmental division manager.

With the mixture underneath, Friedrich said there should be very few brown spots on the lawn in the summer, except for those created by dogs using the restroom. In the winter, the Bermuda grass will turn a straw color, but it will return to a bright green by June.

Even in the hot, sunny summer months, Friedrich said the lawn won’t require much watering.

While the event lawn will be hospitable to people and pets, burrowing animals such as voles, gophers and groundhogs will likely avoid the area. Friedrich said the animals don’t like to dig through the Stalite PermaTill mixture. 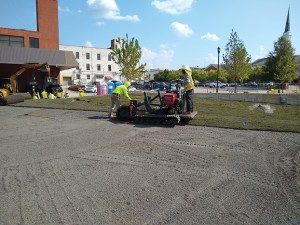 Workers put down rolls of sod on the event lawn at Bell Tower Green park. The Bermuda-hybrid grass is durable and carries a rich shade of green in the summer months. Photo submitted.

Stalite Permatill mixtures can be found underneath lawns at the Biltmore Estate, Cape Fear Botanical Gardens, Wilkesboro Park and Pavilion and Carolina Inn. Wanting to be a part of a hometown project, Stalite decided to donate 35% of the product used in Bell Tower Green.

“Stalite has been around in Salisbury since the 1940s,” Friedrich said. “It’s our town.”

Messinger said several companies have donated to the park, including Taylor Clay, who donated some of the brick used on the sidewalks surrounding Bell Tower Green.

A green sea of grass has already been planted on top of the Stalite Permatill mixture. The sod will need three weeks and plenty of watering before its roots take hold. The lawn’s durability will be tested almost immediately when the Bell Tower Green hosts a grand opening celebration on Sept. 10. Planned to start in the late afternoon, the grand opening party will feature performances from four bands.

Just a day after the park’s grand opening, Pops at the Post will be held at Bell Tower Green on Sept. 11 at 5 p.m.