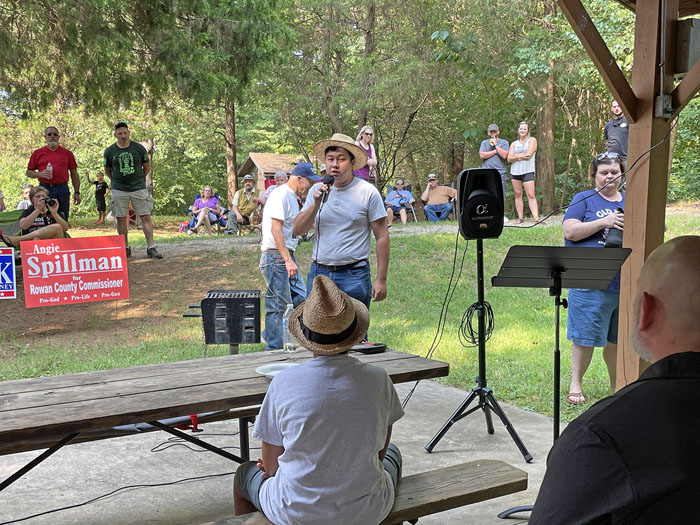 Natalie Anderson/Salisbury Post — Jonathan Barbee, a Salisbury resident who unsuccessfully sought election to the school board during thee 2020 election, spoke during the forum on July 31.

He later called the statement a misplaced joke.

During his allotted time to address voters, Jonathan Barbee, who graduated from Catawba College in 2020 and unsuccessfully ran for Rowan-Salisbury Board of Education the same year, made the comment after detailing a trip to South Carolina days earlier to work with his family business constructing laboratories and classrooms along the East Coast. If elected, Barbee could serve on the council with Heggins, who is running for mayor against incumbent Karen Alexander.

“Just the past three days, I was in South Carolina working at Spartanburg Community College. I think that when we send people to represent us, they should sweat like the normal people that we are. I think that they should start bleeding … they should at least understand that to a degree,” Barbee said. “I’d like to support (Mayor Karen Alexander) to a degree. I think that Al Heggins is a lobotomy recipient. But there’s a lot of things around Salisbury that I think we could do. But as far as I’m concerned, we’re in the minority really hard.”

No longer used in modern medicine, lobotomies were a surgical procedure used to treat mental illness and other disorders in which connections to the brain were severed.

Asked about his comments, Barbee told the Post he understood the event to be a national rally with Sen. Carl Ford and other speakers not in the race for City Council.

“I am not a conservative,” he said. “I was just invited to the event. As to the lobotomy statement, it was simply a joke, misplaced, and nonetheless, a joke.”

“Salisbury does not have a race problem,” he said. “We have a cleaning our streets problem. We have a drug problem. We need to be modernizing our city with our current resources.”

The event also featured candidates for state, national and local races with elections later this year and in 2022. Alexander spoke before Barbee, and candidates Jessica Cloward and Nalini Joseph also spoke to voters.

In introducing Alexander, Erika Vedeikis of the Rowan County Republican Party told voters it was the first year the city would be holding separate elections for mayor and council and called on those in attendance to reclaim the majority in support of Alexander.

“Salisbury’s facing a major election this year, 2021,” Vedeikis said. “For the very first time, Salisbury will vote for a mayor. They will have two choices: Heggins or Alexander.

Alexander’s remarks detailed her experience as mayor and a council member in addition to groups she works with in the community. Alexander is president of the North Carolina League of Municipalities. She also explained to voters the process for relocating the “Fame” Confederate statue and the kinds of issues the council works on, including infrastructure with the city’s sewer and water services, public safety with police and fire services and quality of life with the parks and recreation projects.

Before Alexander took questions, Vedeikis credited the mayor with “saving” Fame by working with the United Daughters of the Confederacy to relocate it after it was deemed a public safety hazard.

Heggins didn’t respond to a request for comment about Barbee’s statement during the forum.

RALEIGH — Since the General Assembly convened in January, Gov. Roy Cooper has now signed 26 bills backed by Rowan County’s lawmakers in the House and Senate.

Of those, 15 come from bills backed by Rep. Wayne Sasser, a Republican who represents Rowan, Cabarrus and Stanly counties. Sasser’s bills with Cooper’s signature range from extending the Clean Water and Natural Gas Critical Needs Bond Act of 1998 to more residential and mixed-use lots, authorizing even-year elections for Mount Airy, making timely payments to charter schools, the authorization of practicing occupational therapy across state boundaries and various bills making modifying changes to programs within the Department of Health and Human Services.

Sasser is chair of the House Health committee, and is the only pharmacist in the General Assembly.

A total of seven bills from Rep. Harry Warren have now been passed. Those bills range from increasing the punishment to a felony for those who remove or damage the ID on private property or certain machinery valued at $1,000 or more, the authorization for the town of Spencer to operate utility vehicles on public roads and revising the level of “lead poisoning hazard” for families.

Sen. Carl Ford, a Republican representing Rowan and Stanly counties, has successfully gotten the governor’s approval for two of his bills. One authorizes the reinvestment of funds deposited in nuclear decommissioning funds to be invested in funds monitored by the state treasurer, which is expected to result in better rates for municipalities utilizing the services of ElectriCities for electric power, like Landis. The other bill makes various changes to the state’s agriculture and forestry industries, as well as the Department of Agriculture and Consumer Services.

Ford sponsored three bills earlier this session that Cooper vetoed, including a bill to make illegal abortions based on the unborn child’s race or potential for Down’s syndrome and another that would have eliminated the additional $300 per week in unemployment compensation from the federal government, as well as exclude up to $10,200 of unemployment benefits received in 2020 from state income tax for those with an income below $150,000. Another bill vetoed would have allowed churches to authorize conceal carry if they’re located on the same premise as educational institutions.

In his veto messages, Cooper said the bill related to abortion is unconstitutional and gives the government control over what happens and what is said in the exam room between a woman and her doctor as “she faces one of the most difficult decisions of her life.” For the bill calling for the end of federal unemployment benefits, Cooper said North Carolina strengthened its work search requirements and the number of those receiving federal benefits was on the decline because of the vaccine. Cooper also said the state’s share of unemployment benefits were “among the stingiest in the country.”

Regarding Senate Bill 43, or “Protect Religious Meeting Places,” Cooper said the state should keep guns off school grounds for the safety of students and teachers.

A total of two bills from Rep. Julia Howard have received the gubernatorial signature. Howard is a Republican representing parts of Rowan and Davie counties. One bill is a resolution honoring the death of Melanie Wade Goodwin, a former representative first elected in 2004 who succeeded her husband, Wayne Goodwin. Goodwin was a Democrat representing Richmond and Montgomery counties until 2010, and the first sitting member to give birth while serving office.

Howard’s other bill kept the base tax rate for unemployment insurance at 1.9% instead of 2.4% that was expected before the pandemic. Warren also backed that bill.

SALISBURY — In lieu of its August virtual breakfast meeting, the Rowan County Democratic Party will host a Family Fun Fest on Aug. 14 at Bakers Creek Park in Kannapolis.

The festival will feature activities for children, including a splash pad, carousel, tennis, basketball and a playground. Democratic candidates for state and local races will also speak briefly.

Those interested in attending should register at tinyurl.com/rcdpsummer  by Wednesday to provide a count for food.