Further into New Mexico, Freeze climbs to highest point in the ride 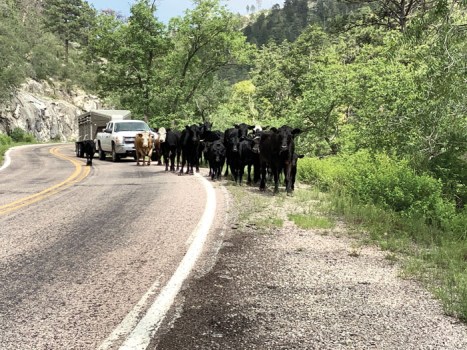 These cows were coming down the mountain when Freeze climbed Emory Pass. Photo by David Freeze, for the Salisbury Post. 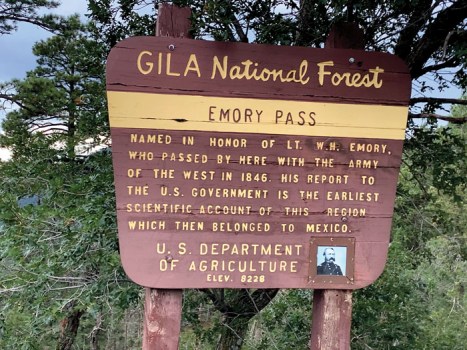 This sign that signifies the history of Emory Pass, the highest point on Freeze’s ride this summer, topping out 8,228 feet. Photo by David Freeze, for the Salisbury Post. 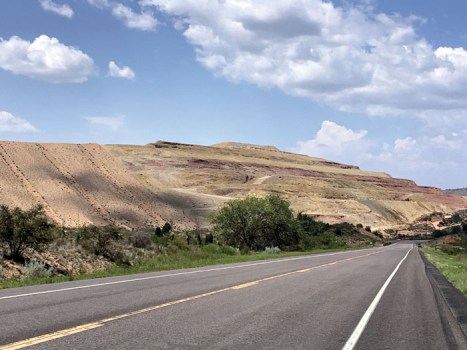 Not sure what this product is, but what you can see is about a tenth of the amount on hand. Freeze will ask what it is. Photo by David Freeze, for the Salisbury Post. 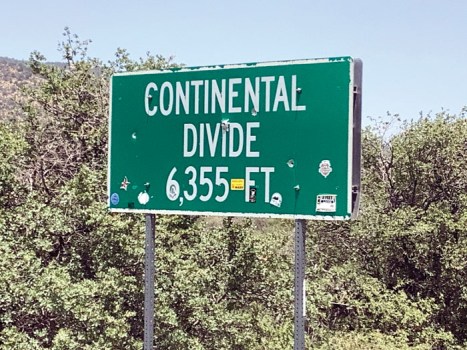 The Continental Divide was a significant part of the story today. The elevation is high, about 2,000 more than in Lordsburg where Freeze spent last night. Riding was uphill all morning. Photo by David Freeze, for the Salisbury Post.

I’ve been doing some version of these bike adventures for 10 years now. During that time, I’ve learned that best days leave time in the evening to write a good story, answer messages and plan for the next day. And maybe a little rest and a very hot shower. Yesterday, I didn’t do well at any of that, but got much better today.

Today was an unknown when I started out, and being in the Mountain Time Zone changed things. I stayed up researching and had a little time this morning before safe daylight came. I said I had no expectations and didn’t. Yesterday, I came into Lordsburg with a fast afternoon ride on U.S. 70. I left out on U.S. 90, riding uphill from the start in the lowest gears. The panorama behind me was beautiful, but demoralizing to go so slow. By 20 miles, which took all morning, I had visions of having to flag down a ride or call 911. My bike tires felt like the brakes were on, not once could I coast.

I begin to focus on crossing the Continental Divide at 6,335 feet while hoping that the ride would then have at least some downhill. My spirits were revived when some downhill did come. I made a mistake this morning, being out of ice and snacks except for crackers. I had water but it got warm again. There were no supply points for the whole ride. I rode through White Signal and Tyrone. Tyrone had a burrito store that wasn’t open. I was almost drooling by the time I hit the first convenience store and got a cold drink with ice. I have learned the value of ice and shade on this trip.

Several things happened along the way. Both sides of the road eventually had grass and then cow pastures. The temperatures were much cooler at 6,000 feet and will be in the low 60s in the morning as I take on the big summit of Emory Pass and 8,229 feet. I made good enough time to get in the room by 5:30 p.m. local time. I have already had a Denny’s breakfast, which is next to the Copper Manor Motel where I’m staying. My ice cream awaits the completion of this article.

Silver City was best known for copper and silver mining and being one of the hangouts of Billy the Kid.

Tomorrow has some supply points which will lighten the day, but my legs have about had it and the morning will be a complete struggle. Lodging is largely unavailable after the summit but I will figure out something.

I only had 46 miles today but they were some of the most hard-fought ever. Tomorrow will likely be the same. Send those prayers for the days ahead.

Leonard Wood is back as a valued sponsor and travel guide this year. Leonard has already been to most of the areas I ride and is an avid cyclist, so I value his input.

Back tomorrow with the story of the summit! Thanks for your support and questions as the ride continues on. See you tomorrow!

I left Silver City and a nice room at the Cooper Manor Motel early this morning, focused on getting over Emory Pass, the highest point on this ride. I was loaded with supplies because the towns ahead looked questionable.

All the riding was challenging, up and down, right from the start. After leaving U.S. 180, I turned uphill on Hwy. 152. Shortly afterward, I met the most interesting person on the ride so far. Sam Ortega stopped because he thought I needed a ride right before Hanover. We talked about several things and really hit it off. Sam was worried about me and ending up giving me ice water, a snack, gloves and a rag. I even expected I might see him later.

The next town was missing when I passed San Lorenzo. So far none of the towns had supplies, but I had carried enough for the big climb ahead. The terrain kept getting steeper, resembling some of the long climbs I had experienced out west in the bigger mountains.

I met about 30 cows coming down the road that I was going up. They were herded by a truck following them. Evidently cows are kept in the area because of many cattle grates in the road.

Finally, at about 5:30 p.m., I topped the mountain at 8,228 feet, grabbed a few photos and started down 8 steep miles headed for the Black Range Lodge in Kingston. A couple miles down, I hit one of the most memorable thunderstorms I’ve ever experienced. Heavy, blowing rain, with occasional lightning and hail. My fingers were so cold that I could barely grip the brake levers and the rain made the brakes struggle to slow the bike. Then the road started flooding.

Struggling mightily, I found the road for the lodge and pedaled through more flooding. Catherine, one of the owners, told me that they had not received such heavy rain in months. I’m warm, happy and ready to sleep after just 48 super challenging miles.

I did find out that the huge man-made mountains I had seen the last few days are the leftovers of copper mining. I visited the observation area for the Santa Rita Mine, one of the oldest and largest in the world.

Tomorrow, most of the riding will be downhill and I am ready for that. Texas is just a couple days away! Join me tomorrow!