Family of Nease Gillespie asks, “Will commitment to work lead community from shadow of lynching tree?” 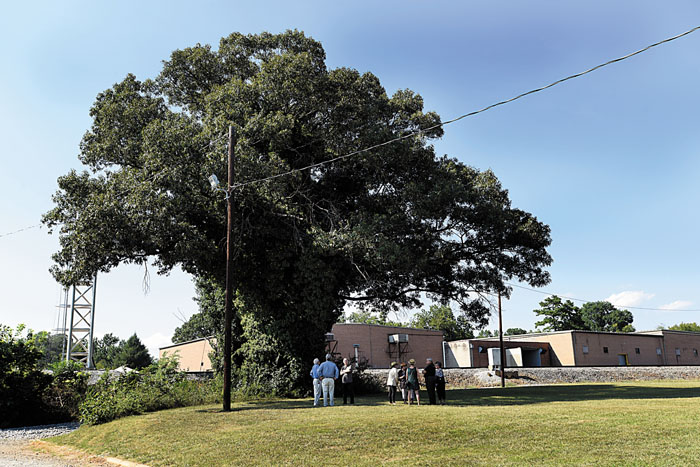 This submission was written by the great-grandchildren of Nease Gillespie, who was one of three Black tenant farmers accused of killing the Lyerly family near Barber Junction in 1906, dragged from the jail and lynched by a mob.

Everyone knew what would happen the moment the bodies were discovered and the accusations were made. The events that unfolded were not surprising to any, except the young and the naïve ones who believed law and order and due process were applied evenly to all.

The murders of Nease Gillespie, his son John and Jack Dillingham were inevitable and all but mandated by the systems in place in 1906 Rowan County. After all, just four years earlier, two young boys, also named Gillespie, had been lynched after they were accused of the murder of a young white woman. The horrific murder of the Lyerly family, whom they were accused of killing, required an urgent and elevated response. Everyone was in place waiting to play their part. So, they did.

We know they knew there was no way out for them. We know they would wish for death before it gave them final release. We know our great-grandfather would feel an overwhelming sense of helplessness, hopelessness and fear, not for himself as much as for his son, who sat beside him in the jail and whom he could do nothing to protect. And we know they knew the ones they loved and left behind would have an uneasy and treacherous existence. This undoubtedly was their deepest fear: would their families survive?

We don’t know if you can understand how it feels to open a book and see a picture of the brutalized bodies of your ancestors dangling from a tree, surrounded by the gleeful and unashamed faces of the mob, who had marched them to their death. Or if you can understand the unremitting terror and trauma after the lynching caused our Grandpa Tom to move his family 13 times in a three-year period in a fruitless search for a place where he could feel safe.  We don’t know if you can understand how it feels to grow up in the same community as the relatives of the murdered while also being a descendant of the murdered without having the same sympathy accorded to your family. How about passing a student in the high school hallways and feel the unwanted and unspoken connection, created by murder, mystery and violence, that forever bound your families? Can you imagine how it felt to drive by the burned-out remnants of the Lyerly home and be forcibly reminded of the place where lives were horribly lost and where speculation and gossip led to even more death and destruction? We don’t know if you know how it feels to always have your story told by someone else, to always be required to respond to what others have determined happened or should happen.

Truth be told, this is how we feel.

When we found out several years ago that the Actions in Faith and Justice Committee was planning a ceremony of remembrance and reconciliation, we did as we have always done. We prepared and readied ourselves to guard and protect our family. We attended the meetings and heard the plans and ensured all family members were aware of what was happening. We honored and respected our individual family members in their responses to the planned activities. One of our sisters gave a scripture reading. Our great-niece danced as a member of a local troupe. Some family members stayed away and some of us stood by the tree. We don’t know if it was the actual tree where the lynching occurred, but it doesn’t matter. We stood there, three, four and five generations removed: strong, resilient, unbowed.

And we whispered to my great-grandfather that he could rest. We have survived, his family is still here, and his blood still flows.

We hoped that it would make a difference, that it would be a beginning of a deeper understanding and that this community would seize the opportunity to honestly discuss and address the issues that divide us. But five years later, we are still standing pretty much in the same spot. So, we will have another ceremony.

Many people have told our great-grandfather’s story. for many reasons. Some are well-intended and some not as much. There are opinions and theories and suspects and mysteries and things we will never know and that really don’t matter.

Our family knows its truth. And we are free.