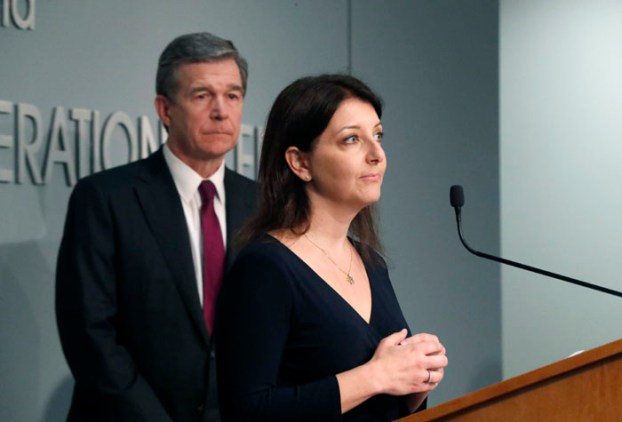 Dr. Mandy Cohen, secretary of the state Department of Health and Human Services, speaks as Gov. Roy Cooper listens during an earlier briefing on the coronavirus pandemic at the Emergency Operations Center in Raleigh. (File photo by Ethan Hyman/The News & Observer via AP)

RALEIGH  — North Carolina Gov. Roy Cooper on Thursday decided to reverse course from guidance he issued last week and will now urge all K-12 public school students and staff to be masked, even if they have been fully vaccinated for COVID-19.

The Democratic governor and the state’s top public health official, Dr. Mandy Cohen, pinned much blame on unvaccinated people and renewed calls for them to get the shot.

“Our trends have turned sharply in the wrong direction,” Cooper said at a news conference. “Unvaccinated people are driving this resurgence and getting themselves and other people sick.”

But at a time when nearly all available metrics show spread of the virus at its worst levels in months, Cooper said he’ll let the statewide mask mandate expire on Friday.

In the two weeks prior to Cooper’s announcement last week that he’d let the statewide mask mandate expire and ease masking requirements for high school students starting July 30, cases had already more than tripled and hospitalizations had gone up over 69% — a move that frustrated the state’s largest lobbying group for teachers. It also confused some Democratic lawmakers and prompted several school districts to make masks optional for all K-12 students.

“I can’t get into the governor’s mind on why he felt that way,” state Rep. Garland Pierce, a Democrat representing Hoke and Scotland counties, said in an interview following Cooper’s decision to ease restrictions. “I will be honest about it. I’m just a little concerned with that because it’s kind of hard to tell people to take the masks off but get the shots. I hope that he can rethink that just a little bit because it will send a mixed message.”

Nineteen school districts have decided to make mask wearing optional for K-12 students, according to an Education NC analysis. Pupils under age 12 are not currently eligible for a COVID-19 vaccine.

Since Cooper’s announcement, spread of the virus has continued to skyrocket, largely fueled by the more contagious delta variant and those who are not fully vaccinated.

New daily COVID-19 cases surpassed 3,200 on Thursday for the first time since Feb. 25. More than 10% of test results on Sunday came back positive, the worst positivity rate since Feb. 1. Additionally, 1,141 people are currently hospitalized in North Carolina due to the virus — the highest count since April 22.

“Our trends are accelerating at an alarmingly fast rate,” Cohen said, adding that “this is a pandemic now of the unvaccinated.”

North Carolina is not unique.

The surge is happening across the country, which prompted the U.S. Centers for Disease Control and Prevention to reverse course this week by recommending vaccinated people in most counties wear masks in public indoor settings.

The latest CDC data has all but 14 of North Carolina’s 100 counties showing “substantial” or “high” levels of transmission because at least 50 new cases per 100,000 people emerged over the past seven days. This means nearly all of the roughly 5 million fully vaccinated North Carolinians should continue wearing masks when they are indoors and out in the public.

Top North Carolina Republicans worry the abrupt shift in recommendations from state and federal health officials will prompt fewer residents to come in for a vaccine because they’ll still need to wear masks indoors.

“All we’re getting from public health authorities are shifting rules and perpetual panic,” Republican Senate leader Phil Berger’s office said in a news release. “The CDC offers more consistent guidance on consuming raw cookie dough than on masks. That’s a problem and here’s why: If the CDC erodes its credibility on masks, then it risks eroding its credibility on the far more important message of vaccines.”

Still, there were some signs of optimism that more people would come in for a shot, particularly as students prepare to return to school, adults grow increasingly worried about the delta variant and employers compel workers to get vaccinated.

More than 60,000 North Carolinians came in for a first dose of a vaccine last week, which is the highest weekly count since the week of May 24.

While the plans have drawn substantial pushback from top Republican lawmakers concerned about individual rights, 14 state-run health care facilities and several major hospital systems, including WakeMed Health & Hospitals, are compelling workers to get a COVID-19 shot if they want to remain employed.

Cooper announced Thursday that cabinet agency workers will be asked to show proof they were vaccinated. Unvaccinated officials will be required to wear a mask and get tested weekly, he said.

Outside experts back COVID-19 booster shots only for seniors, high-risk individuals