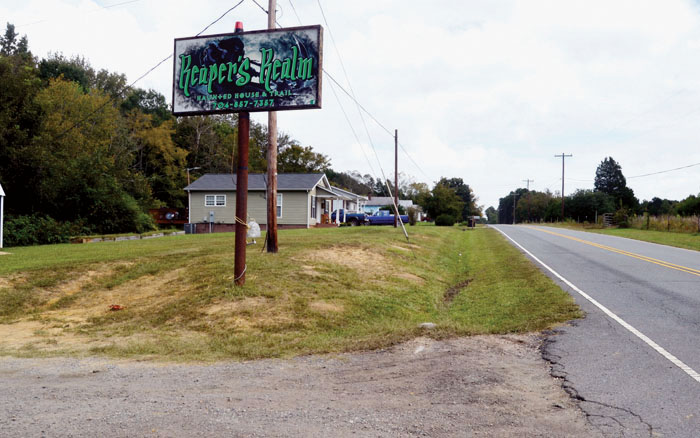 The entrance to Reaper’s Realm Haunted House and Trail in China Grove.

Located on a 18.3-acre property between Old Linn and Daugherty roads, Reaper’s Realm is a seasonal attraction owned and operated by Tony Jenkins and his family. The haunt started as a small, scary trail in the late 2000s and has grown significantly over the years. It is now staffed by 30 employees, requires 40 volunteers and can accommodate over 1,000 guests per night.

The property on which Reaper’s Realm is located is zoned rural agricultural, which does not allow for seasonal attractions such as haunted houses. However, the Rowan County Board of Commissioners in 2017 granted Reaper’s Realm a temporary use permit that allowed it to operate despite its improper zoning.

The permit expired in 2019, but Jenkins continued to operate the haunt unpermitted in 2020. After a shooting occurred at the attraction in September, county commissioners approved another permit for the remainder of the 2020 season but expressed their desire for the property to be rezoned permanently. They also placed several conditions on the temporary permit requiring Jenkins to boost security.

Jenkins was seeking a conditional rezoning on Monday evening that would allow for the continued operation of Reaper’s Realm, but the Planning Board voted almost unanimously against the request.

One of the primary reasons why the board denied the request, Chairman Pete Bogle said during the meeting, was that it provided a benefit to the owner at the expense of his neighbors.

The Planning Board’s decision is only a recommendation. The future of the haunted house is now in the hands of the Board of Commissioners, who maintain ultimate authority on approving or denying the rezoning request.

The Planning Board’s vote came at the end of a public hearing during which Jenkins and his agent, Concord-based lawyer Al Benshoff, laid out their plans for the property. Numerous nearby landowners also came forward to express their disapproval of the haunted attraction.

In his application, Jenkins requested to operate Reaper’s Realm no more than 30 days per year, including 20 days during the Halloween season and 10 days spread out over Christmas, St. Patrick’s Day and Valentine’s Day. The daily hours of operation would be from 6:30-10 p.m. Sunday through Thursday and 6:30 p.m.-12:30 a.m. Friday through Saturday, with no admission tickets being sold at least an hour before closing.

In the rezoning application, Jenkins sought to address many of the concerns voiced by commissioners in the fall when they advised him to seek permanent rezoning. Among those were issues of noise, traffic flow and site safety.

Traffic was an issue on Sept. 26 when hundreds of cars packed the roads near Reaper’s Realm and the shooting occurred. Jenkins said the overwhelming number of people who showed up for opening night, including “600 teenagers dropped off from Charlotte,” caught Reaper’s Realm off guard.

“It was a slap in the face of where did these people come from,” Jenkins said. “We’d never been like that before. So, we had to back up and figure out what we had to do to control all of that.”

To better manage traffic flow, Jenkins’ proposal calls for the creation of an entrance road to the haunted house off Old Linn Road, with cars exiting the haunted house via Daughtery Road on the other side of the property. Additionally, a traffic circle would be built near the entrance for people who need to turn around. Drop offs and unaccompanied minors would be outlawed and the facility would limit its daily intake to 1,200 patrons.

To address noise complaints, Jenkins said he would keep the noise level at or below 70 decibels and would implement buffers composed of vegetation along the entrance road. Benshoff told the Planning Board that Jenkins is hoping to hire a qualified person to conduct a noise test to prove that Reaper’s Realm can comply with the noise ordinance.

After the shooting in the fall, Jenkins said he hired five law enforcement officers and five security guards at the haunt. In his application, Jenkins asserted that he would retain that security in the future. He also has a pending contract with Rowan Rescue Squad to provide assistance when the haunt is open.

By including numerous provisions in the rezoning application, Benshoff said Jenkins is showing that Reaper’s Realm will operated differently than it was when the shooting occurred.

“We’ve tried to address all of the concerns as best we can so far,” Benshoff said. “We are not asking for that Reaper’s Realm, we’re asking for a different Reaper’s Realm. Mr. Jenkins does not want that repeated. His family lives there.”

None of the measures in Jenkins’ application seemed to satisfy the nearby property owners who showed up in numbers to protest the rezoning Monday night.

Of the 10 or so people who took the lectern to speak during the hearing, only two spoke favorably about the haunted house. One was an employee of Reaper’s Realm and another was a nearby property owner who commented that Jenkins has always been respectful. The rest of the speakers voiced concerns revolving around the same issues Jenkins’ was hoping to resolve in his application: noise, traffic and safety.

Teresa Sloop, who lives nearby and was the first to speak in opposition to the request, recounted her experience during the night of the shooting in September.

“As I remember, this was a very scary night,” Sloop said. “We were told through telephone communications with neighbors: don’t go outside. There’s been a shooting at Reaper’s Realm, which is right next door through the woods from me. People were running through the woods. Police cars were everywhere. It’s hard to explain the fear that overcomes your mind and the panic that sets in. Will there be someone coming through my woods where I live? Do you go to sleep?”

Sloop’s safety concerns were echoed by her neighbors, as was her issue with the “loud” noise generated by the haunted house.

“During the months that Mr. Jenkins is in operation, I can see everything, I can hear everything,” said Taylor Deyton, who lives on land adjacent to Reaper’s Realm. “It’s an amphitheater. The sound is directed right at my back porch. They have lights that come in from the driveway currently go right into my bedroom window, my daughter’s window. We can’t enjoy a drink on the back porch after a long day of work because we have sounds of murder and mayhem in our backyard.”

Contention focused on when Reaper’s Realm officially stopped its operations and ceased making noise. Several neighbors contended they’ve heard screams, chainsaws and other loud sounds well past midnight, while Jenkins and one of his supporters said they cut off operations earlier. When commissioners granted Reaper’s Realm a temporary use permit last year, they stipulated that operations must have been finished by midnight.

The traffic created by the haunted house was another sticking point brought up by almost every residents who spoke.

Steve Shuffler, who lives along Old Linn Road, said he was concerned that we wouldn’t be able to leave his driveway easily if an entrance to Reaper’s Realm was created off Old Linn Road.

After each person spoke in opposition to the rezoning request, the contingent of concerned neighbors filled the room with raucous rounds of applause and some cheering. While one person was speaking favorably about the haunted house, Bogle even had to deploy his chairman’s gavel to quiet the standing-room-only crowd who disagreed with her statement.

The hearing last well over two hours and forced the board to extend the meeting, which started at 7 p.m., past 9 p.m. Once the hearing was finished, the board deliberated briefly before voting to deny the request around 9:30 p.m. Board member Adam Sewell was the only opposing vote.