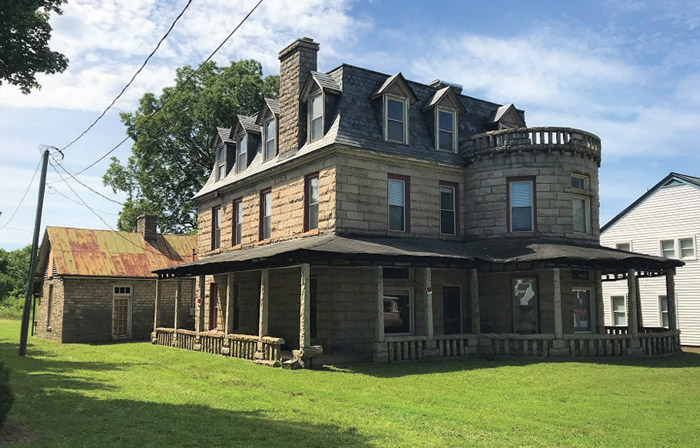 Work day at the McCanless house

SALISBURY — From the moment she laid eyes on the Napoleon Bonaparte McCanless House, Sandra Toscano was enchanted by its exterior.

With a facade covered in gray ashlar-cut rusticated granite blocks, the outside of the three-story home at 619 S. Main St. could pass for a medieval fortress.

“What bride wouldn’t want a fairy tale wedding and to get married in a castle?” Toscano said.

Toscano, who is in the process of planning her own wedding, is hoping her thinking is shared by other brides.

The Mexico-born, Charlotte-based real estate developer recently purchased the McCanless House for $180,000 from the Historic Salisbury Foundation. Toscano and her fiancé, C.P. Edgar, plan to convert the home and the grounds around it into an events and wedding venue. The couple eventually plans on making a portion of the third floor their retirement residence as well.

Built around 1896 by a prominent Rowan County resident named after one of France’s most famous historical figures, the home has changed hands many times over the years. For a period in the 1980s, the home was transformed into a restaurant named for its builder, Bonaparte’s.

The building was used by a nonprofit in the 1990s and sold to a private owner in 2004. Livingstone College bought the house  in 2011 with intentions of using it for the hospitality program. Those dreams never materialized and the house was purchased by the Historic Salisbury Foundation in 2019.

Toscano found the McCanless House at the same time she was searching for a wedding venue herself. The price of venues, she said, shocked her. She hopes on offering the McCanless House as an affordable option for people looking to get married in an interesting and historic place. In addition to weddings, Toscano said she envisions hosting holiday events at the home, including Día de los Muertos, or Day of the Dead, celebrations.

Toscano and Edgar were captivated by the property after touring it in June, but they also were charmed by Salisbury.

“We’re in love with the downtown area and the surrounding neighborhoods,” Toscano said. “It’s actually a place where we think we’re going to be retiring. It’s not just an investment for us as a wedding and events venue, it’s also a potential residence.”

Despite the work done to stabilize the home by the Historic Salisbury Foundation, the McCanless House is still in need of a full rehabilitation effort. Toscano is quite aware of the challenge and is ready to take it with a measured, phased approach.

“It’s gutted, so it needs plumbing, electricity, it needs HVAC, it needs flooring, a lot of the walls are gone,” Toscano said. “It’s an entire overhaul renovation. One room at a time.”

Sada Stewart Troutman, executive director of the Historic Salisbury Foundation, said that finding an owner with the right fortitude and foresight was critical.

“It was vital to find the right people because it’s not a small task,” Troutman said. “It takes someone with not only a big imagination, but with dedication to this project. I think we found a really unique and valuable couple willing to do that.”

Toscano said the extreme nature of the renovation is both “good and bad.” It will require an immense amount of time and effort, but it also allows them to mold the home how they see fit.

“We’re excited that it’s a clean slate so we can pretty much determine how to position lighting and plumbing and that sort of stuff,” Toscano said.

The first step in the process is to tackle the first floor, including the spacious front porch. From there, Toscano and Edgar want to convert the secondary structure behind the home, which served as the kitchen, into a tavern that’s available during events and weddings.

Landscaping the backyard is also a priority, as is transforming a dilapidated greenhouse in the backyard into a picturesque pergola — perfect for wedding ceremonies or small concerts. After dealing with what’s closest to the ground, Toscano said the plan will be to convert the second floor into bridal suites and the third floor into a honeymoon suite and a living space.

The rehabilitation project, she said, will likely span four years. However, Toscano said work will begin as soon as possible with hopes of having the tavern up and running for October Tour. The McCanless house will be one of the homes around Salisbury on the tour this year.

“When we sold it, we said, ‘Hey, would you guys be amenable to allowing us to keep it on tour?’” Troutman said. “I think this speaks to their excitement to being a part of Salisbury and being a part of the community that they said, ‘Of course, we’d love to.’”

October Tour is scheduled for the weekend of Oct. 9-10. Tickets and information are available at www.octobertour.com or by calling the Historic Salisbury Foundation office at 704-636-0103.

Having the McCanless House restored, Troutman said, will be good both for the city’s historic preservation efforts and for the area as a whole.

“I think it’s going to hopefully instigate some good change in that corridor of South Main on a larger scale,” Troutman said.

Those interested in contributing to the house’s renovation, whether it be through a story of the home or with building materials, can reach Toscano at sandra.realtor@yahoo.com.