New county board of elections members sworn in until 2023; board to select early voting plan at August meeting 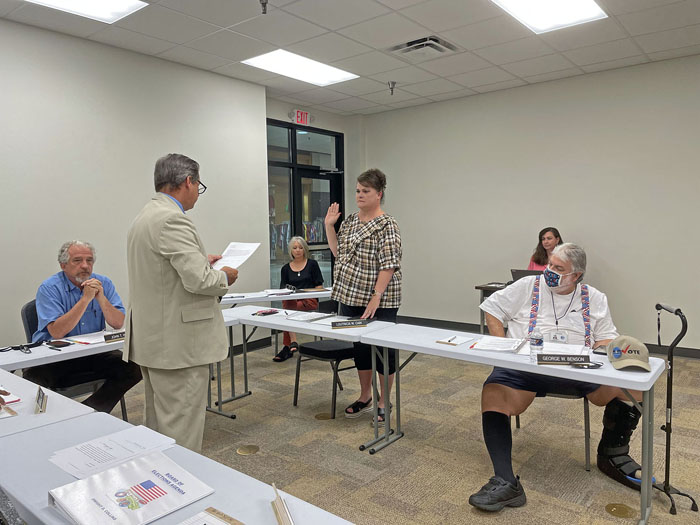 Natalie Anderson/Salisbury Post — Rowan County Clerk of Court Jeff Barger joined the Rowan County Board of Elections Tuesday, July 20, 2021, to formally swear in a new board, which will serve a two-year term. Loutricia Cain, a Republican, is the only new member. She is joined by Democrats George W. Benson, Catrelia Hunter and chair John Hudson. Republican Dave Collins was also appointed by the state board last month but was not present for Tuesday's swearing-in ceremony as he was out of town.

SALISBURY — A few familiar faces and one new Republican were sworn into new two-year terms with the Rowan County Board of Elections on Tuesday.

Rowan County Clerk of Court Jeff Barger joined the Rowan County Board of Elections Tuesday to formally swear in Democrats George W. Benson and Catrelia Hunter, along with Loutricia Cain, a Republican who’s new to the board. Republican Dave Collins was also appointed by the state board last month but was not present for Tuesday’s swearing-in ceremony as he was out of town.

On Monday, Gov. Roy Cooper appointed chairs to each county boards of elections. John Hudson, another Democrat, will continue chairing the board in Rowan County. Hudson, an attorney, has served on the board for more than 20 years.

The board’s duties include conducting local elections, operating voting sites, maintaining voter registration lists, appointing judges and assistants at voting sites and certifying election results. State law outlines restrictions on political speech while serving on the board, and those elected or campaigning for office are not eligible.

Benson is a retired transportation manager from The Grimes Companies — now called Total Distribution, Inc. — and a current member of the city of Salisbury’s Transportation Advisory Board. He first joined the elections board in 2018.

Hunter, who also joined the board in 2018 and served as secretary in the last term, is a retired professor and administrator from Livingstone College, where she spent 30 years. On Tuesday, Hunter was nominated and formally elected the board secretary for another term. She’s also the first Black woman who has been appointed to the board.

Cain and her husband, Donald, own Ark Plumbing, Inc. in China Grove.

During the public comment period, Rowan County Democratic Party Chair Geoffrey Hoy commended the board for its history of doing “very well” in honoring its dedication to the process of carrying out elections and tabulating each vote with integrity.

Also at the meeting, the board approved the candidate filings for the 2021 municipal election and a resolution to use the Rowan Public Library South Branch in Landis as precinct 19A for the upcoming November election. Board of Elections Executive Director Brenda McCubbins said such a resolution is submitted to the state prior to each election as the voting location doesn’t technically fall within the precinct lines.

Additionally, McCubbins said Piedmont Baptist Church has agreed to serve as precinct 44 due to the closure of Enochville Elementary School in China Grove. The church is only 2 miles from the school. McCubbins said parking is accessible, and the inside will work well during the election.

“I would love to have 40 more of these, honestly,” McCubbins said. There are currently 41 precincts.

However, since that precinct is not a voting location for municipal elections, the new location wouldn’t be needed until the 2022 election.

Board members also discussed the feasibility of curbside drive-thru voting for future elections. In past elections, the county has provided reserved parking spaces for elections officials to assist voters with disabilities wishing to cast a ballot. During the 2020 election, a drive-thru option for curbside voting was implemented, but Benson called it “a disaster” at Tuesday’s meeting, noting the disruptions caused by a caravan of vehicles participating in a pro-Trump parade downtown and a few vehicles holding “Make Good Trouble” signs that both made their way to the no-campaigning zone at the West End Plaza. State law provides a “buffer zone” at elections sites, with no campaigning allowed within 50 feet of the entrance.

McCubbins said after speaking with the county’s emergency management services, there are concerns with the traffic flow and confusion from other voters. Additionally, it could interfere with the city’s public transit route. McCubbins said she prefers to go back to having designated parking spaces, and said the board recently purchased several tall flags to better indicate the curbside voting area.

The Board of Elections’ regularly scheduled meetings will be 12:30 p.m. on the first Tuesday of the month at the elections office in West End Plaza, located at 1935 Jake Alexander Blvd. West. The next meeting, however, has been pushed back to Aug. 17 due to the state elections conference. At the Aug. 17 meeting, the board will choose one of the state’s three options for one-stop early voting dates and times. McCubbins said a formal plan has to be submitted to the state by Aug. 20.

Editor’s Note: This story has been updated to reflect that George W. Benson referenced both caravans of vehicles that breached the 50-foot buffer zone during the 2020 election.

Livingstone hoping to raise $75,000 for athletics projects via…