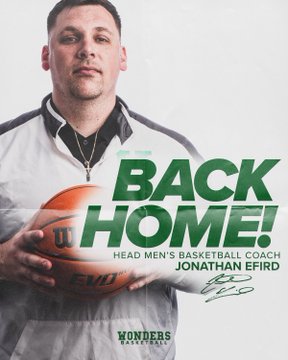 Efird is best remembered by A.L. Brown fans for his work as the Wonders’ football quarterback. He was one of the best passers in program history and was good enough to play in the 2008 East-West All-Star Game.

The late Ron Massey gave Efird a shot and he threw a varsity touchdown pass against Concord when he was a freshman. As a sophomore, he threw the touchdown pass and 2-point conversion in overtime that won the legendary 2005  playoff game against TC Roberson.

Efird threw for 2,069 yards in his first healthy year as the starter as a junior.

As a senior in the fall of 2007, Efird threw for 1,980 yards and 23 touchdowns, with only six interceptions and was all-conference for the second straight season. He topped 200 passing yards against South Rowan, Parkwood, Concord and in the 19-14 playoff loss to Charlotte Catholic that ended his days as the Wonders’ QB. He threw five TD passes in the Parkwood game.

His 4,598 career passing yards and 44 TD passes rank among the top totals in school history.

On the basketball court, the 6-foot-2 Efird was a very good player for coach Shelwyn Klutz. He led the Wonders in rebounding as a junior and in scoring as a senior. He averaged double figures both seasons. A streaky shooter, he poured in a career-best 29 points as a varsity sophomore against Porter Ridge.

He worked his way up from sixth-string to second-team QB in Cullowhee, but when neither a scholarship nor meaningful playing time materialized, he transferred to D-II UNC Pembroke.

After a redshirt season, he played some at UNC Pembroke and quarterbacked a win against Catawba, but he was always the backup to standout Luke Charles, probably the best QB in UNCP history.

Humbled by adversity, Efird matured, learned to put the team above his own dreams and was a leader in the weight room and classroom and on the practice field  for the Braves even when he wasn’t playing much. Basically, he learned how to be a great teammate.

The extreme highs and lows Efird experienced during his playing career were ideal preparation for coaching for young men and women. He was a star signal-caller at a young age, but he also was that guy who carried a clipboard and cheered for his teammates — until it was time to hold for a field goal or PAT.

He stayed on in the Pembroke area after college, doing his student-teaching at Purnell Swett and then launching a coaching career at the school.

Purnell Swett was 4A and competed in a league with the likes of Richmond and Scotland. Almost 90 percent of Pembroke’s population is Native American, but Efird, who is white, was never an outsider. He fit in and made Pembroke his home.

Not surprisingly, Efird became the quarterbacks coach and offensive coordinator for the Purnell Swett football team. He coached the jayvee baseball team, as well, but where he really made a name for himself was as head coach of the girls basketball team. When Purnell Swett swept rival Lumberton and made the playoffs in 2020, it broke a long drought.

Highly respected Andy Poplin, who has won state titles, was hired to replace Klutz, but it didn’t work out.  It was a strange basketball season for everyone with the COVID pandemic  eliminating the normal preseason camps and preparation, and Poplin lasted just one year.

Now the Wonders look ahead to a normal school year and a normal basketball season with an A.L. Brown graduate at the helm.