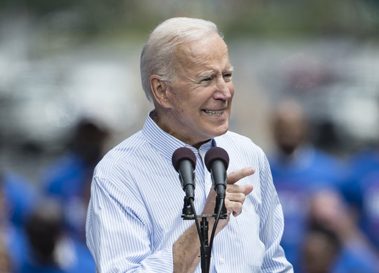 The meeting set for July 26 comes at a pivotal point in the U.S.-Iraq relationship, and amid growing concerns about more frequent attacks against U.S. troops in Iraq and Syria.

There have been at least eight drone attacks targeting the U.S. presence since Biden took office in January, as well as 17 rocket attacks.

The attacks on U.S. forces have been blamed on the Iranian-backed militias that make up the bulk of Iraq’s state-supported Popular Mobilization Forces.

The Biden administration has responded by twice targeting Iraqi militia groups operating inside Syria, including one close to the Iraq border.

But with the Biden administration seeking to revive an Obama-era nuclear accord with Iran, there have been signs that Iran is looking to curb, at least for now, militia attacks on the U.S.
Soleimani’s successor Esmail Ghaani last month called on Iranian-backed militias to remain calm until after nuclear talks between Iran and the United States, The Associated Press reported last week.