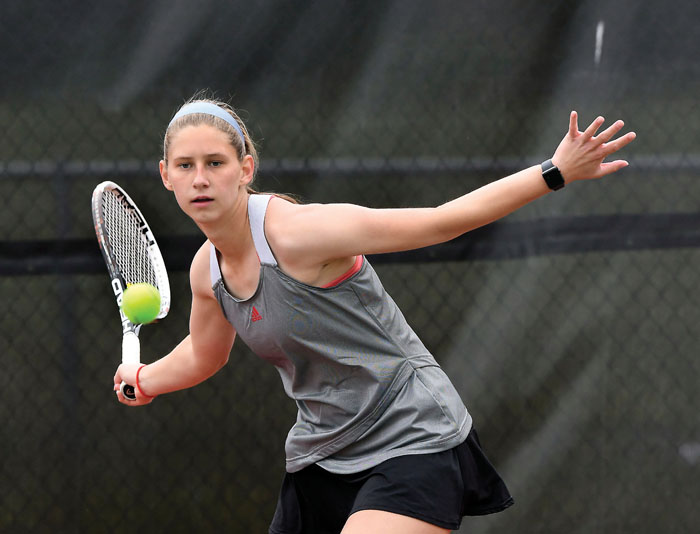 Salisbury's Lillie Rusher is Rowan County Player of the Year. File photo by Wayne Hinshaw, for the Salisbury Post

SALISBURY — One of the girls doubles matches of the year in the state occurred in the 2A state quarterfinals in Cary.

That one took a while and took some effort. There were more momentum changes than in the average basketball game.

“Our girls got around that one mostly because even after they got down, Lillie kept on pushing,” Salisbury coach Milton Griffith said. “She’s very competitive, and she’s not going to stop. She’s never going to give up.”

Rusher and Burton won in the semifinals in much more routine fashion.

Their high school careers ended with a loss in the state championship match to Hendersonville sisters McCollough and Eliza Perry.

Still, it was close to a dream senior season for both Salisbury girls. Rusher’s only loss at No. 1 singles was in a Central Carolina Conference match against Oak Grove’s Jessica Fuchs (6-3, 6-4), who finished as 2A state runner-up. Burton didn’t lose a singles match all season.

Rusher repeats as the Post’s Rowan County Player of the Year, although nothing about this season was ever routine.

With the modified COVID schedule, the sports seasons were out of whack. Normally, girls tennis is a fall sport. Girls have the summer to get ready for it.

Rusher’s primary sport is soccer, and the Hornets’ stellar soccer season ended with a third-round playoff loss at eventual state champ Lake Norman Charter on May 7.

Salisbury’s first tennis match took place against West Davidson on May 5. Burton played No. 1 singles for the match that Rusher missed and won 6-0, 6-0. Rusher’s debut came against Lexington on May 10.

“Lillie was busy with soccer and she was rusty when this tennis season started,” Griffith said. “But once she puts her mind to it, she’s totally dedicated to a sport. She gave everything she had to tennis once she was with us, and it wasn’t long before she was playing as well as ever. She just kept working at it. She’ll practice endlessly.”

Salisbury has won every CCC girls tennis championship since 2003 and took another one, it’s 18th in a row.

It was another banner season for coach Milton Griffith and the Hornets. Besides winning the CCC, Salisbury beat previously undefeated Carson 8-1 in the biggest county matchup in years. Salisbury doubles teams squared off for the CCC tournament championship. Salisbury put two doubles teams and a singles qualifier in the state championships.

Rusher didn’t play tennis at all as a sophomore, going all-in on club soccer during the fall months, but coaches, teammates and family talked her into returning to the tennis courts as a junior, and she led the Hornets on a run to the Final Four in the 2A dual team playoffs.

There were no dual team playoffs in this COVID-condensed season. Hendersonville would’ve been hard to beat, but the Hornets likely would’ve been a Final Four team again.

“She played three years of tennis and was a state contender every year,” Griffith said. “Great athlete. Great student. Great personality. She always inspired her teammates to play their best.”

Rusher played No. 4 singles for the Hornets as a freshman when the Hornets had players such as Maria Capito and Julia Honeycutt and won the 2A state championship.

Rusher is probably done with competitive tennis, as her future plan is to play soccer at Catawba.

She might have gone bigger — she’s a three-time All-State player in soccer — but she wanted to stay close to home. Rusher was a defender first, but she still had 25 goals and 85 assists in her career for the Hornets.

Carson lost half the lineup that set records in the fall of 2019, but coach Kayela Galloway guided the Cougars to another unbeaten season in the North Piedmont Conference.

West Rowan’s Lacy Waggoner, a junior, also turned in a notable season. The Falcons weren’t nearly as strong as they had been in recent years, but Waggoner was undefeated at No. 1 singles during the NPC regular season.

Audrey Ward, East Soph. — Played No. 1 singles for the Mustangs

Jaysa Causby, East Jr. — Played competitive matches at No. 1 singles for East when Ward was out with illness

Bailey Webster, South Sr. — Played No. 1 singles for the Raiders