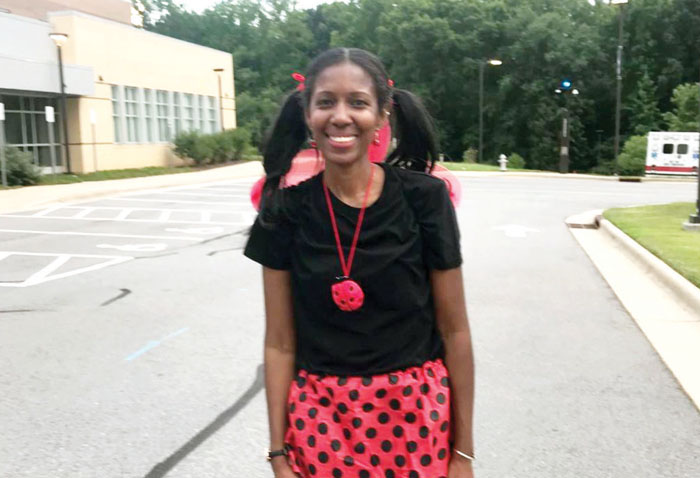 If you’re a member of the birth-to-5 age group, story time is a big deal. But what happens when you can’t get together with your friends for story time?

Shurna Rabsatt, family support program lead for Smart Start Rowan, did some out-of-the box thinking, which led her organization to sponsor its first Drive In Story Time on June 11, held in the parking lot of Rowan-Cabarrus Community College, just behind the Smart Start Rowan building.

Story time for English-speaking families took place at 6 p.m., followed by story time for Spanish-speaking families at 7:30 p.m. Robert Jones of Rowan Public Library read “Mañana Iguana,” for the first group, while Flora Calderon-Steck, a Smart Start Rowan board member, read for the second. In all, 52 parents and children participated and all enjoyed the bilingual book.

“I had quite a few families saying they were nervous about gathering indoors,” Rabsatt said. “I wanted to honor the community and what they were saying.”

Rabsatt came up with the idea of a drive-in event, so families could be safe and be in their cars. Rabsatt tested out a transmitter that could be heard on car radios.

As it turned out, families were excited about it, and new families who had not been to Smart Start Rowan events were part of the action.

Smart Start Rowan staff — dressed as storybook characters — distributed gift bags for each child that included the book “Mañana Iguana,” along with a plush iguana puppet, bottled water, snacks, and materials about a variety of Smart Start Rowan programs. It also included tips for establishing good bedtime routines, reading to children, and information about other community resources.

Ja’Mira was especially excited about snack time, her mom said. She also let Ja’Mira use the puppet while Mr. Robert read the book.

“It was very different,” Sellers said of the event. “I really enjoyed it. I work with children and it gave me a great idea to do at my preschool for good parent engagement. It was very creative.”

Board member Jeanne LeMaster brought along her granddaughter Lov Villamil, 4.

“It was an absolutely wonderful event,” LeMaster said. “It was nice and short. Being able to come to a drive-in avoided the hassle of going in to an event.”

LeMaster said her granddaughter was thrilled with the plush iguana.

“Without the distraction of other people around, she listened to the story,” LeMaster said. “We went and still had a full evening afterward. I thought it was a perfect event.”

Sellers and LeMaster said they hoped the organization would offer drive-in story times in the future.

Although families were asked to remain in their cars, they could park next to one another and chat while complying to the rules, Rabsatt said. “I’m very thankful for RCCC allowing us to use their parking lot.”

Families came early to see one another — socially distanced, of course — and listen to music playing in English and Spanish.

“We wanted Spanish families to hear the story in their native language and be included,” Rabsatt said. “I was happy with how the whole thing went.”

Smart Start Rowan provides programs for children in Rowan County ages birth to 5 and their caregivers. For more information, visit rowan-smartstart.org, call 704-630-9085, or find them on Facebook at Smart Start Rowan.