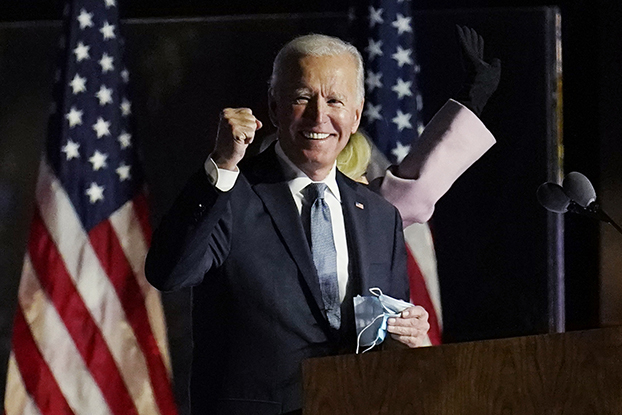 RALEIGH — A song heard at every Donald Trump campaign rally blared at least twice at the close of a North Carolina event featuring President Joe Biden.

Biden had just finished urging people to get vaccinated against COVID-19 and had left the stage when “You Can’t Always Get What You Want” by the Rolling Stones blared over the loudspeakers at the Green Road Community Center in Raleigh.

Biden had made the same point earlier Thursday when he announced that he and a group of Democratic and Republican senators had finally agreed on an infrastructure deal. His message then: compromise means no one gets everything they want. The music blasted his point home, before someone may have realized the goof and switched to “Don’t Stop Believin’” by Journey.

But the Rolling Stones hit was heard again as Biden proceeded to shake hands and smile for selfies with people along a rope line — something the famously tactile politician hadn’t done since before the pandemic.

White House says US will miss vaccination target on July 4

WASHINGTON (AP) — Standing in the State Dining Room on May 4, President Joe Biden laid out a lofty goal to vaccinate 70% of American adults by Independence Day, saying the U.S. would need to overcome “doubters” and laziness to do it. “This is your choice,” he told Americans. “It’s life and death.”

As for the ambition of his 70% goal, Biden added: “I’d like to get it at 100%, but I think realistically we can get to that place between now and July Fourth.”

With the July Fourth holiday approaching, the White House acknowledged this week that Biden will fall shy of his 70% goal and an associated aim of fully vaccinating 165 million adults in the same time frame. The missed milestones are notable in a White House that has been organized around a strategy of underpromising and overdelivering for the American public.

White House officials, while acknowledging they are set to fall short, insist they’re unconcerned. “We don’t see it exactly like something went wrong,” press secretary Jen Psaki said this week, stressing that Americans’ lives are better off than they were when Biden announced the goal.

As of Wednesday, 65.6% of Americans age 18 and older had received at least one shot, according to the Centers for Disease Prevention and Control. The figure is expected to be over 67% by July 4.

A half-dozen officials involved in the vaccination campaign, speaking on condition of anonymity to discuss the missed target candidly, pointed to a combination of factors, including the lessened sense of urgency that followed early success in the vaccination campaign; a decision to reach for a higher goal; and unexpectedly strong recalcitrance among some Americans toward getting a shot.

Nonetheless, the White House says it’s not letting up on its vaccination efforts. Biden flew to Raleigh on Thursday to urge people to roll up their sleeves as part of a nationwide “month of action” to drive up the vaccination rate before the holiday. The White House is rolling out increasingly localized programs to encourage specific communities to get vaccinated.

“The best way to protect yourself against the virus and its variants is to be fully vaccinated,” Biden said after he toured a mobile vaccination unit and met with frontline workers and volunteers. “It works. It’s free. It’s safe. It’s easy.”

The White House always expected a drop-off in vaccination rates, but not as sharp as has proved to be the case.

Many other nations are still scrambling for doses to protect their most vulnerable populations.