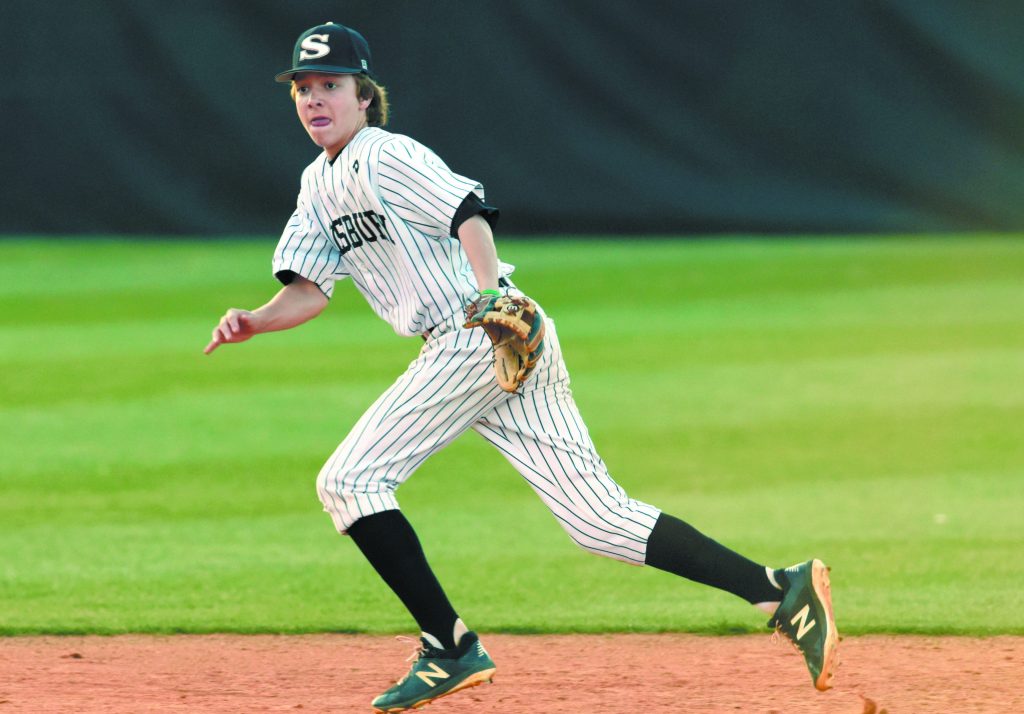 Salisbury's Vance Honeycutt earned the Mark Norris Memorial Award as the Rowan County Player of the Year for baseball. File photo by Wayne Hinshaw, for the Salisbury Post

SALISBURY — Believe it or not, Vance Honeycutt was a little guy when he arrived at Salisbury High.

He scored four touchdowns in the 2AA football state championship game in early May. Now he’s the Mark Norris Memorial Award as the Rowan County Player of the Year for baseball.

“Now Vance is big and he can really run,” Salisbury head baseball coach Mike Herndon said. “It won’t surprise me if he hears his name called in the MLB draft in a few weeks. There have been a lot of scouts around.”

Honeycutt has signed with UNC and he’d have to be drafted very high to detour from that path. He’s been a shortstop in high school and Herndon believes he can stay there throughout his career, but with his wheels, he could wind up as a college outfielder.

Honeycutt only got to play 12 games as a senior for a 5-7 SHS team. Obviously, he didn’t see a whole lot of great pitches to hit.

There were five games in which he didn’t make an out.

“I don’t think there was anyone close to him in the county,” Herndon said.

Herndon batted Honeycutt leadoff, to maximize the number of times he got to the plate. He walked 13 times in addition to his 17 hits, so his on-base percentage was an absurd .689.

“A lot of teams didn’t pitch to him — North Davidson walked him with runners on first and second and two outs —  but if you walked him with no one on base, you knew he’d be standing on third after two pitches,” Herndon said.

In a league that included North Davidson, South Rowan and Oak Grove, Honeycutt was voted Central Conference Player of the Year by the coaches. That might be unprecedented for a player on the fifth-place team. It’s even more telling when you consider that eight of the 10 schools in the league are located in Davidson County.

Honeycutt was just starting to come into his own as a junior. COVID shortened Salisbury’s season to four games.

Then he only got a dozen games in this drastically condensed season.

“That’s my only regret about his high school career,” Herndon said. “If Vance had gotten to play four full seasons, he’s one of those players people would have been talking about for a long time. The good news is his best baseball is still ahead of him.”

The last player from Salisbury to win Rowan County Player of the Year was Philip Tonseth. He was honored in 2011 and went on to graduate from the U.S. Military Academy at West Point.

Honeycutt will receive the Mark Norris Memorial Award, which was first presented by the Norris family in 1978.

Mark Norris was an athlete at Salisbury High, a guard on the football team and a star catcher on the baseball team. He captained the 1975 and 1976 baseball Hornets.

He was a sophomore at UNC Pembroke in 1977  when he was killed in an auto accident in Rowan County.

No award was given for the COVID-shattered 2020 season, but it is back this year. The award has kept Norris’ memory strong with Rowan baseball fans for more than four decades.

It was originally presented to the Salisbury High team MVP, but in 1983, it evolved into the Post’s player of the year award for the entire county.

Cameron Padgett, East, Jr. — Patrick Snider Memorial Award winner. North Piedmont Conference Pitcher of the Year. UNC commit was 5-0 on the mound and batted .372. Versatile defensively, he played first base and third base.

Jake Hunter, East, Sr. — East Carolina signee was 3-2 on the mound with 55 strikeouts and 2.57 ERA. Hit a walk-off homer in the playoffs.

Nathan Chrismon, South, Jr. — Shortstop had an on-base percentage of .529 and scored a team-high 24 runs.

Steven Smith, West, Sr. — Racked up 53 strikeouts in 29 innings and tied for team lead in RBIs.