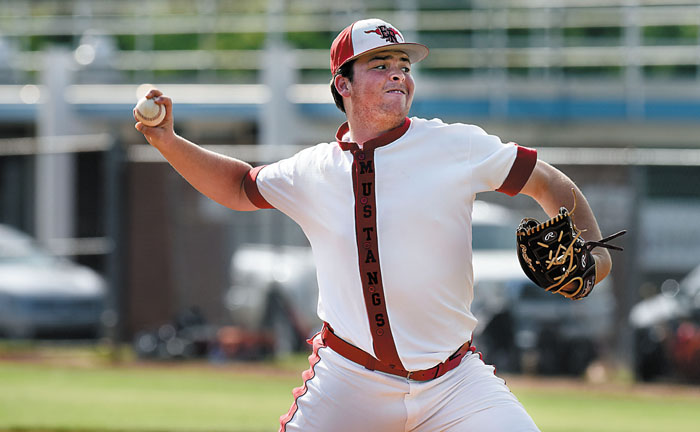 He had four outs to show for it. Line drives that Sun Valley center fielder Garett Sanner raced to corral in the second and fifth and a bullet that diving first baseman Jimmy Kerley stabbed for the double play that abruptly ended the East ninth.

Kerley was holding Cobb Hightower on at first base and was in precisely the wrong place at the wrong time for the Mustangs.

“A foot either way and we’ve got first and third with one out and (Aiden) Schenck coming up,” sighed East head coach Brett Hatley.

That’s how it went on Thursday for the Mustangs at Staton Field.

Line drives were speared. Hot grounders were turned into highlight-film twin killings. Towering drives scraped the fences but stayed in the park. East batters lashed some shots off three determined Sun Valley pitchers, but the third-seeded Mustangs’ season is over after a numbing 5-4, 11-inning loss to the 11th-seeded Spartans.

It was a mind-boggling game, to say the least.

East executed on a hidden-ball trick in extra innings and stole home in regulation. The Mustangs pulled out all the stops. It still wasn’t enough.

“Both teams had so many opportunities,” Sun Valley coach Jeff Stack said. “Unbelievable game. Someone had to lose it. I’m glad we made one more play.”

Senior Jake Hunter gave the Mustangs eight innings and 10 strikeouts (with no walks) in his last trip to the mound, but he got no decision. Sophomore Chance Mako took the mound after Hunter reached the 105 pitch-count limit on the last out of the eighth. Mako put up pressure-packed zeroes in the ninth and 10th, but the Mustangs couldn’t make him a winner.

“We wanted to keep changing velocities and keep changing arm angles,” Stack said. “East Rowan can really hit, and we had to try to keep them off balance. All three of our pitchers gave us good innings, gave us what we needed.”

In an agonizing top of the 11th, Mako yielded a solid leadoff double to Jacob Budzik. Matthew Watson’s sacrifice bunt moved the runner to third. Mako struck out the next man, but with No. 9 batter Jacob Bowman at the plate, Mako sent a 2-and-2 pitch whistling over the head of catcher Tristan Miller. Budzik dashed home from third with the decisive run.

Austin Fulk smacked a one-out single for East in the bottom half of the 11th, but Tinsley struck out Mako and got Nate Hayworth to lift a routine flyball on a 3-and-1 pitch to end the game. Hightower, the freshman leadoff hitter who had been East’s most effective offensive player, was in the on-deck circle when it ended. It was that kind of night.

“We did hit some balls hard, but their shortstop and third baseman played fantastic games,” Hatley said. “Bottom line, we just didn’t execute well enough offensively. We had the baserunners. We didn’t move them around.”

Sun Valley scored in the top of the first. Singles by Brandon Butterworth and Greg Bello set up a sac fly by Jack Wooten.

East got that run right back in the bottom half.

Hightower reached on an error and one-out singles by Schenck and Griffin Warden filled the bases. Morgan Padgett was hit by a pitch to force home a run. East appeared ready for a big inning, but Hunter rapped into a 1-2-3 double play.

In the bottom of the second, East had runners at second and third with no outs after hits by Fulk and Mako. After a pop fly, Hightower hit a sharp grounder deep in the hole, but Butterworth, the shortstop, made a terrific play. He made the only play he had and got Mako out trying to advance to third. Fulk scored. The Mustangs led 2-1.

East went up 3-1 in the third when Warden walked and worked his way around the bases, eventually stealing home.

Sun Valley moved back on top 4-3 in the fifth. Butterworth doubled and scored on Wooten’s two-out infield hit.

Hunter, who crushed a walk-off homer in the first round, and just about everyone else in the park thought he had launched a homer leading off the bottom of the sixth. Budzik caught it at the fence.

“I thought it was out, I did,” Hunter said. “But it was one of those nights. It’s all about getting the bat to the ball, and we didn’t do it enough.”

Not long after Hunter brought a massive crowd to its collective feet, Mako did homer, ripping a crip line drive over the fence in left. That made it 4-all, a new game, but neither team could break through in the seventh, eighth, ninth or 10th.

In the seventh, East had two on with one out, and Warden hit it hard, but Butterworth gloved the ball near the second-base bag. Once he’d fielded it, it was an easy double play.

Morgan Padgett singled to start the East eighth, but the Mustangs couldn’t score.

Sun Valley didn’t score in the ninth despite an error, walk and single. The Spartans made a baserunning mistake, and East catcher Tristan Miller hustled out to make a tag in a rundown. Miller also threw out two would-be basestealers and made a remarkable throw to get the out at first base after a bouncing third strike went to the screen.

Sun Valley had a runner at second base with two men out in the 10th when East executed on one of its versions of the hidden-ball trick. Mustangs went diving everywhere as if a pickoff throw to second base had gone awry, and a Sun Valley runner took the bait and took off. He was tagged out at third.

“I’m yelling for him to stop, but it was really loud and our runner had his head down,” Stack said.

That play figured to mean a lot of momentum for the Mustangs, but they went down 1-2-3 in the bottom of the inning against Tinsley.

Then, in the 11th, the Spartans finally got a runner home.

“We competed, we stayed in it all night,” Hatley said. “This was the kind of game you live to coach in, but we lost to a great team. Hats off to Sun Valley. They’re as good as anyone we’ve played. They have the best offensive team we’ve faced, and they played stellar defense.”

Hightower had three hits, and Fulk and Mako had two each for East. Hightower was on base five times.

Butterworth banged out three hits to lead the Spartans. Garrett Sanner, Bello and Budzik had two each.

“East was disciplined, well-coached, very tough, very talented, but our league prepared us well for this game,” Stack said. “We knew coming here what kind of effort it would take to win in this atmosphere, and our guys did it.”

Both teams had huge crowd support. Sun Valley traveled well and the fans were loud.

The Spartans will be on the road again on Saturday at second-seeded St. Stephens, the team that edged Carson in extra innings in the first round.

“We’ve been working toward this since last August,” Stack said. “We’ve got some players and I’ve tried to give them some tools. On a night like this, you just cut them loose and let them play.”