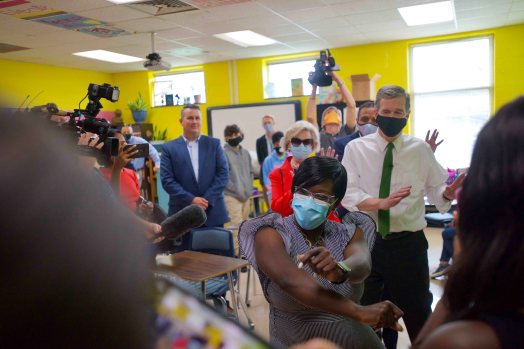 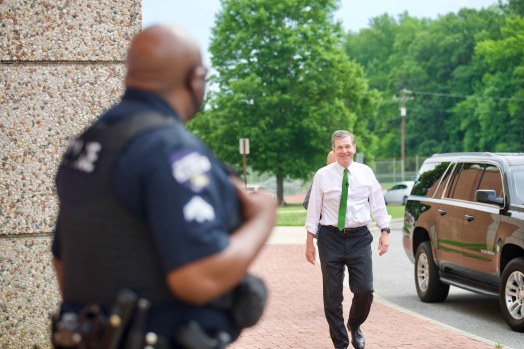 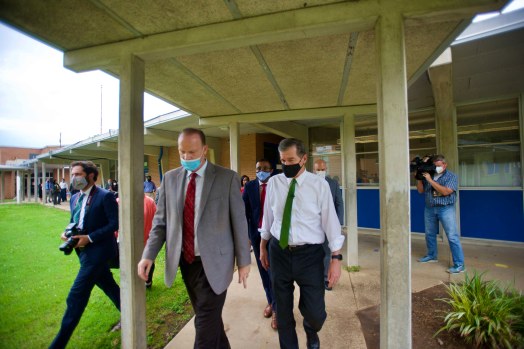 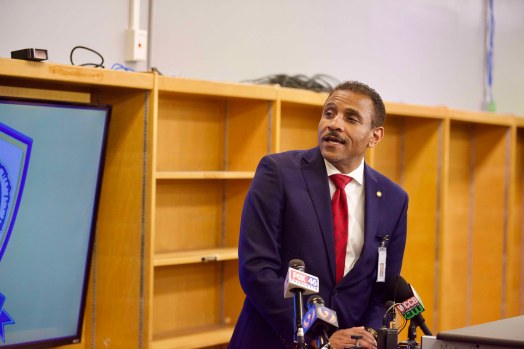 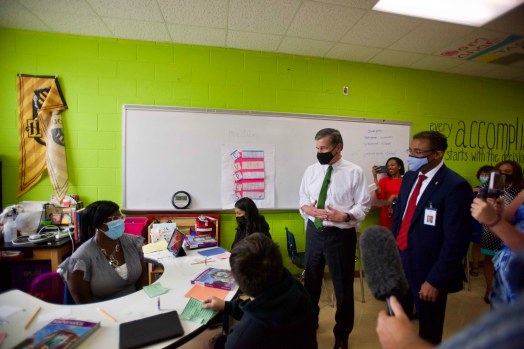 SALISBURY – On Thursday, Gov. Roy Cooper went back to class.

Cooper traveled to Salisbury’s Knox Middle School Thursday to talk to Felecia Young, a math teacher, who he interviewed and featured in his annual State of the State Address. For his speech and a video that accompanied it, Cooper and Young spoke via video call. Thursday was their first time meeting in person.

Cooper arrived at the school Thursday morning to a gaggle of media representatives, district officials and Rowan-Salisbury Schools Board of Education members who tagged along as he took a brief tour of the school on the first day of summer programming

On his way to see Young, Cooper stopped in on a room full of teachers working on professional development. He told the group the state needs to significantly increase teacher compensation and reiterated that point during a news conference later in the morning.

“You all are molding our future,” he told faculty.

Young was working with students when Cooper arrived at her classroom. She roped Cooper into recording a dance during a TikTok video. The jury is out on the governor’s dancing skills, but Cooper said he got a taste of the fun Young has with her students. Young has used TikTok, a social media platform focused on short videos, as a way to engage with her students and creates dances that demonstrate concepts such as quadrants on a grid. Her use of the social media platform was a focus in the video Cooper’s office published ahead of his address.

Young’s family tagged along for the visit. Her daughter, Kayla, graduated as valedictorian at Carson High School at the end of May. Her son, Benjamin, is a student at Knox. Her husband, Benny, and youngest son, Theo, were there as well.

Young said she was excited when she met Cooper virtually, but Thursday’s experience surreal.

Young is helping with small groups here and there during the summer. If teachers continue to be intentional about delivering lessons, she said, it will help students make great gains in the interim between school years.

“They call it the summer slide. Well, those kids won’t experience that because they’re continuing to get that education that they need,” Young said.

During the visit, Cooper told multiple people he’s hoping for a school year that’s as normal as possible and expressed his condolences for the death of Matthew Beaver, a 40-year-old physical education teacher at Knox who contracted COVID-19 and died suddenly in January.

Cooper said he doesn’t know what will be allowed in the 2021-2022 school year because scientists are still examining the effect of the virus on children and its transmissibility.

“We know that the CDC is actively looking at this and that they are telling us that they will be making a recommendation soon on schools,” Cooper said. “Obviously we’re already in summer camp and here we are in summer school today.”

During the visit, Cooper encouraged people to get vaccinated, saying the immunizations are the way out of the pandemic.

“They have been almost miraculous in their effectiveness and with their safety,” Cooper said.