Bost Sportsmanship Award: Morgan’s feet light up the track, but so does his smile 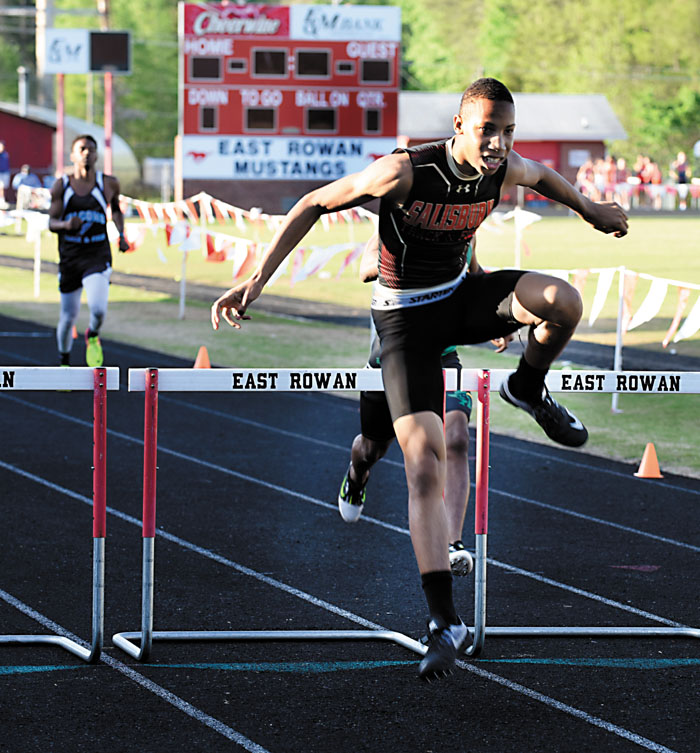 SALISBURY— When they asked Salisbury head football coach Brian Hinson for someone to represent his football team at the 2A state championship game, Christian Morgan was the first one he thought about.

There are some high-character, high-talent studs on that team, but if there was an All-America squad for smiles, Morgan would get two spots on the first team.

“He’s one of my favorite people,” Hinson said. “We needed to pick a guy for our sportsmanship award at the state championship game, and Christian was the perfect one to represent our program and our school. Great kid. It was a big moment for him.”

Morgan is  the male winner of the second annual J.T. Bost Rowan County Sportsmanship Award. Bost, a well-known umpire and official in a half-dozen sports, was killed in a traffic accident in 2018. Andrew Poston, one of Bost’s colleagues, sponsors the award. A panel chooses the award. North Rowan’s Malcolm Wilson was the 2020 winner.

While the concept of sportsmanship is an intangible that can’t be measured by numbers, it involves competing with fairness, ethics, respect and a sense of fellowship with teammates and competitors.

Morgan brought the best of all those things to the table.

“In games and at practices, on or off the field, I tried to pick guys up every day,” Morgan said. “At the state championship, it was nice to see that people have noticed the sportsmanship I try to play with. I try to carry myself  in the best way possible and I try to represent all my teammates.”

A receiver, Morgan only caught a handful of passes for the Hornets this season, but he embraced his role as a senior.

“He was one of those seniors who did a great job of passing on the expectations of what it means to be a Salisbury football player down to the younger guys,” Hinson said. “He never complained about playing time, always gave 100 percent, and was excited when his teammates were successful. He was fun to be around.”

In the world of track and field, Morgan is much more than a role player.

There he’s a star. He’s piled up track and field points for Salisbury. Todd Parker, Michael Dowdy and Bryan Withers are SHS coaches who have helped Morgan.

In the Rowan County Championships on May 15, Morgan won three individual events, taking the 200 meters, the 110 hurdles and the 300 hurdles. He also was part of a win in the 4200. That was a fun Saturday for him, especially competing against friends who hurdle for North Rowan.

Somehow Morgan has made friends with just about everyone he’s encountered along the way, including South Rowan’s outstanding distance runner Noah Julian.

“I started running AAU track around eighth grade and people starting telling me I could go far in the hurdles,” Morgan said. “I’ve kept moving with that.”

He’s from an athletic family. His younger sister, Mary Morgan, is a good basketball player and track thrower for the Hornets.

His uncle, Jarvis Morgan, caught passes for West Rowan back in the glory days. As a youngster, Christian was there for all those games.

Morgan plans to take his hurdling skills to North Carolina A&T, where he plans to become part of a strong track program.

He plans a criminal justice major.

“My dad and my uncle work in law enforcement, so there’s a family tradition,” Morgan said. “I’ve always been fascinated by the crime shows on TV.”

There’s still a lot to look forward to in this track and field season, including the Central Carolina Conference Championships at Ledford on June 10.

Win or lose, Morgan will handle it the same way he always has.

“He’ll run with a lot of class, whether he beats you or you beat him,” Hinson said.

At the end, there will be a firm handshake — and a great smile. That’s who Morgan is.