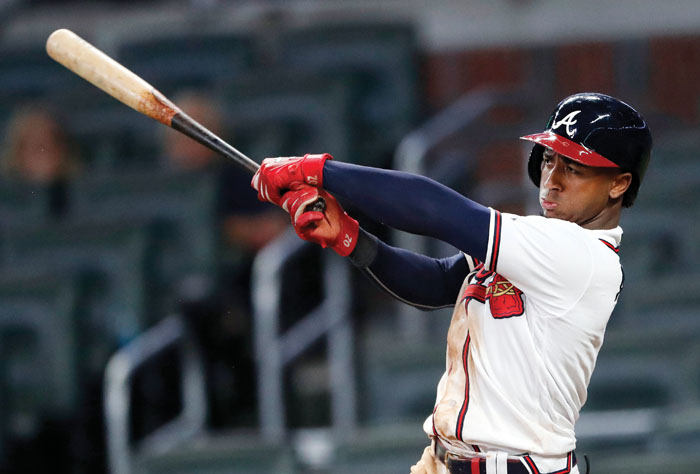 ATLANTA (AP) — Ozzie Albies drove in the go-ahead run in a five-run third inning off Clayton Kershaw, Abraham Almonte got a pinch-hit homer off Blake Treinen in the seventh, and the Atlanta Braves beat the Los Angeles Dodgers 6-4 on Saturday night.

Braves starter Charlie Morton (5-2) didn’t allow a hit until Cody Bellinger had the first of four consecutive singles to begin the fourth. Morton gave up four hits, four runs — two earned — with one walk and five strikeouts in five innings.

Kershaw (7-5), the former NL MVP and a three-time Cy Young Award winner, lost to the Braves for the first time in 12 career regular-season starts. He began the game 5-0 with a 1.78 ERA against Atlanta before allowing five runs, eight hits and one walk and striking out nine in six innings. It was his second straight ineffective start after giving up five runs and seven hits in a 5-4 loss to San Francisco last Sunday.

Will Smith earned his 10th save in 10 chances by striking out the side in the ninth.
The Braves went ahead 5-1 in the third on Freddie Freeman’s RBI single, Albies’ two-run double and Dansby Swanson’s two-run double. Almonte’s first career pinch-hit homer put Atlanta up 6-4.

Los Angeles led 1-0 in the first when Mookie Betts got hit by a pitch, advanced to second on a third baseman Austin Riley’s fielding error and scored from third on Morton’s throwing error on a pickoff move.

The defending World Series champion Dodgers trimmed the lead to 5-4 in the fourth when Bellinger singled, stole second base, advanced on Chris Taylor’s single and scored on Matt Beaty’s single. Taylor scored on a double play grounder, and Beaty scored on shortstop Swanson’s throwing error.

Dodgers: Manager Dave Roberts said INF Max Muncy, who sprained his right ankle trying to beat out a double play Friday, might not return to the lineup until Tuesday at Pittsburgh. The team is off Monday, giving Muncy an extra day to recuperate. … SS Corey Seager, the reigning World Series MVP, has traveled with the team and is doing some light baseball activities. Roberts said it’s too early to tell when Seager, on the injured list with a broken right hand, will be able to face live pitching. He’s been sidelined since getting hit by a pitch against Miami on May 15.

Braves: LHP Grant Dayton was placed on the injured list with left shoulder inflammation. RHP Jacob Webb was recalled from Triple-A Gwinnett in a corresponding move. … C Travis d’Arnaud, on the 60-day IL with a torn ligament in his left thumb, is still wearing a cast. He’s been running, throwing and swinging one-handed.

Kershaw passed Tom Glavine and Chuck Finley to move into 27th place on the career strikeout list with 2,611.

Los Angeles reinstated RHP Brusdar Graterol (forearm tightness) from the 10-day injured list and optioned him to Triple-A Oklahoma City. Roberts spoke with Graterol to reassure him that he would be back in the majors soon, but he needs to work on his sinker and slider.