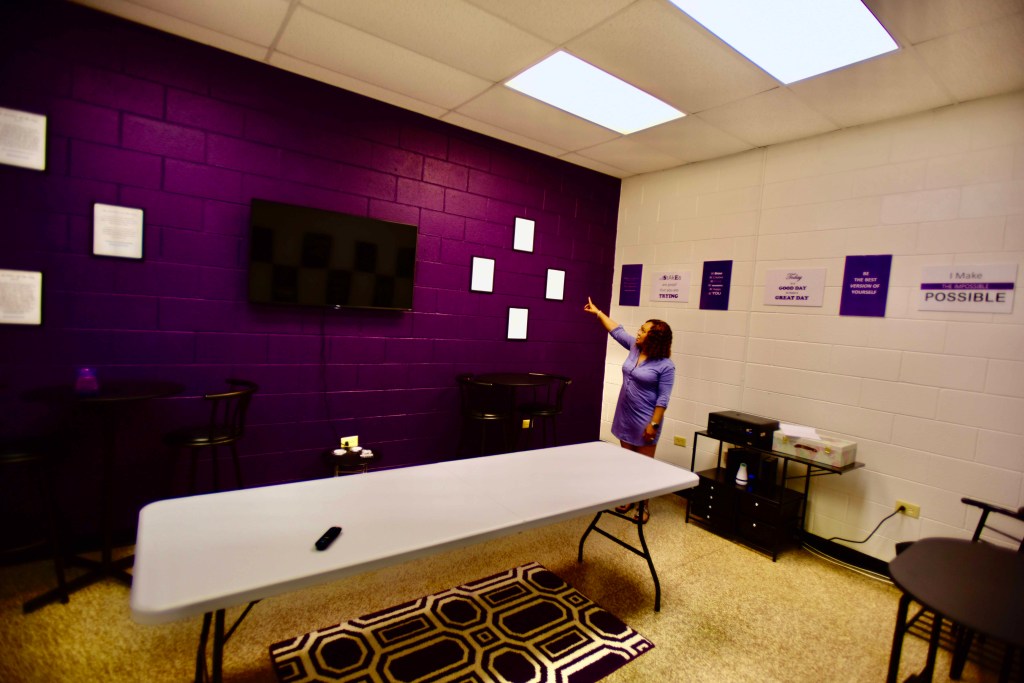 Carl Blankenship/Salisbury Post - Alisha Byrd-Clark showing the new internet cafe space. It has been decorated with quotes and there are some laptops available for students to use as well.

The nonprofit secured the West Corriher location and began moving in during early April. It held a grand opening for the facility in May. Co-founder and Rowan-Salisbury Schools board member Alisha Byrd-Clark said she’s heard from families in the previous year who struggled with sufficient internet access.

“I don’t want a child to be left behind because they don’t have internet access,” Byrd-Clark said.

The cafe, new for this year, is named for Gemstones and COMPASS co-founder Alex Clark, who lost his battle with ALS last year. Byrd-Clark said she had to pick up the pieces and continue what she and her husband started after Alex passed away.

“The foundation had been laid and there’s still work for me to do,” Byrd-Clark said.

Byrd-Clark said hearing stories about children having problems with devices and internet access led her to ask what she could do to help.

The cafe is open to any child in the community who needs internet access and provides a laid-back space for people to study. Byrd-Clark said the nonprofit has offered free internet access outside of the dedicated space for a while now.

“They might come in having a bad day, but my whole vision when they walk through those doors their day changes in a positive way,” Byrd-Clark said, adding there is a meeting space in the back of the facility where a student could work alone if they choose.

There are tables out front as well. Byrd-Clark said she wants to do whatever she can to help families get the access they need.

Before COVID-19, the district already hosted a small number elearning days that kept students home to work remotely. Using education software and devices for each student have become standard practice in recent years as well.

Tamika Brown’s daughters both went through the nonprofit’s program starting in middle school. Brown said Gemstones and COMPASS provided quality mentoring for them outside the girls’ parents

“My husband and I know Gemstones has helped them with the foundation to be successful,” Brown said.

The nonprofit is accepting monetary donations and non-perishables for its food pantry as well. They can be dropped off at its 129A West Corriher Ave. location, online at www.gemstonesandcompass.org or via mail at P.O. Box 484, Salisbury, 28145.