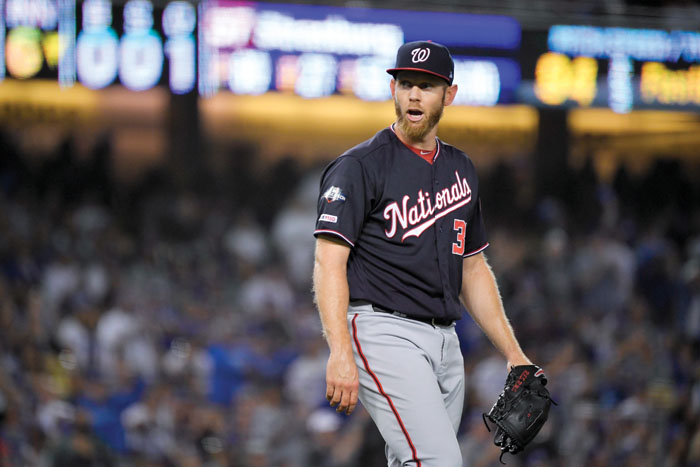 The Nationals snapped their five-game losing streak even though Strasburg lasted only 1 1/3 innings. The right-hander left the game after William Contreras’ liner hit his left arm near his glove. Strasburg’s glove appeared to absorb at least some of the blow.

Strasburg picked up the ball and threw out Contreras at first base, but he was pulled following a visit from manager Dave Martinez and trainer Paul Lessard.

Strasburg was on the injured list from April 15 until May 21 with right shoulder inflammation. His first mound visit from Martinez and Lessard came after he opened the game by walking Ronald Acuña Jr. on four pitches. Acuña stole second and scored on Ozzie Albies’ double to left field.

The Nationals provided no immediate update on the status of Strasburg, who allowed one run on one hit and two walks while throwing only 30 pitches.

Acuña had three hits, including a two-run homer off Austin Voth (2-0) in the fifth. Those were the only runs allowed by Voth in three innings.

Soto’s homer off Grant Dayton in the eighth cleared the wall in left-center. Soto appeared to mimic Acuña’s stutter step near third base on his jog around the bases.

Soto also hit a two-run single off Max Fried (2-3) in a four-run fourth. Fried, who threw three wild pitches, plunked Josh Harrison with a pitch after giving up a single to Voth.

Fried allowed five runs on six hits and two walks in 3 2/3 innings. After he left the game, Zimmerman hit Edgar Santana’s first pitch over the wall in right-center for his sixth homer and a 6-1 lead.

Dansby Swanson’s run-scoring single in the fifth cut the Nationals’ lead to two following the two-run homer by Acuña.

Washington padded the lead with three runs in the seventh, including a two-run double by Yan Gomes off Tyler Matzek. Kyle Schwarber’s line-drive single to left field drove in Soto, who walked.
Nationals third baseman Starlin Castro dropped Swanson’s infield popup for an error in the seventh after Austin Riley’s infield hit drove in Acuña, who doubled.

Nationals: RHP Erick Fedde (illness) is scheduled make a rehab start for Class A Wilmington on Thursday. Fedde will join the Nationals in Philadelphia on Friday. … OF Victor Robles (right ankle sprain) returned to the lineup after being reinstated from the 10-day injured list Monday.

Braves: RHP Shane Greene gave up one hit in a scoreless inning in his third appearance for Triple-A Gwinnett. Greene’s scheduled outing on Sunday was pushed back due to back discomfort. The 32-year-old Greene re-signed with Atlanta on May 9.

Washington LHP Jon Lester (0-2, 4.91 ERA) will pitch on three days’ rest against LHP Drew Smyly (2-3, 5.95) on Wednesday night. Martinez said Lester, who threw 74 pitches in four innings, allowing five hits and one run, in a 6-2 loss to Milwaukee on Saturday, was “totally fine” with moving up in the rotation when Fedde was not yet available. “I told him just take us as long as he can go,” Martinez said.