SALISBURY — Americans’ rights were given to them by God, but they’ve been protected by those who gave the ultimate sacrifice, state Rep. Harry Warren told a gathering of people at a Memorial Day event.

Held Monday at Salisbury City Park, the event featured speeches from elected officials and other dignitaries, music and solemn tributes to military men and women who didn’t make it back home. It was one of multiple Memorial Day events held in Salisbury and Rowan County.

For his part, Warren, a Republican who represents the 76th District, encouraged those attending the Salisbury events to exercise their rights. He called participation in government a civic duty and a “moral responsibility.”

“If we do not exercise those rights, if we do not participate in our government, which is our civic duty, then we not only dishonor those folks, but we make their sacrifice meaningless. I’d like you to think about that for a second,” Warren said. “The fight for freedom is never over. Once it’s won, it has to be protected to be preserved. That duty, that responsibility, falls on each of us and every beneficiary of those rights.” 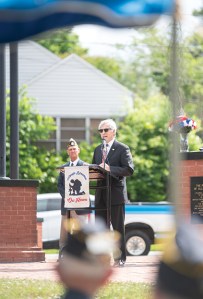 Passing beliefs and values onto the next generation is as important as teaching children how to walk and talk, he said.

“If a generation ever comes into power in this country without a clear understanding and a deep appreciation for what it means to be free and what the price of freedom is, they will be all-too-susceptible to letting it slip away from them,” Warren said.”They will learn too late the difference between a life of servitude to a government and a government that exists to serve you.”

Other speakers during Monday’s event included Commissioner Mike Caskey, who asked those in attendance to think about the families who have lost a loved one in combat. Commissioners Chairman Greg Edds told the story of his uncle Paul, who had his finger bitten off during hand-to-hand combat in a foxhole Battle of Peleliu, an island in the western Pacific, in World War II. State Sen. Carl Ford, a Republican who represents the 33rd District, quoted former President Ronald Reagan, who said, “Freedom is never more than one generation away from extinction” and “If we ever forget that we’re one nation under God, then we will be a nation gone under.” Salisbury resident and philanthropist Ronnie Smith spoke about Memorial Day ties to the Civil War and said “Fame” was a monument to all veterans.

U.S. Rep. Ted Budd, a Republican who represents the 13th District, encouraged people to participate in a moment of remembrance at 3 p.m., which encouraged in a 2000 bill passed by Congress called the National Moment of Remembrance Act.

“Memorial Day is often treated as the unofficial start of summer, and there’s passing references to the true origin of the day, but those of you who have shown up today and at other events like this around our country know the true meaning of the day,” Budd said. “It’s more than a long weekend.”

He also presented an American flag that flew over the U.S. Capitol to Mark Beaver, who led Monday’s event.

The keynote speaker for the Memorial Day event in City Park was Salisbury VA Director Joseph Vaughn, who served in the Navy himself and said people killed or missing in action never had the chance to be called a veteran or be thanked for their service. About 1.3 million people have been killed in action, a number that’s larger than some states’ population, Vaughn said.

“Today is a poignant reminder that America did not become a superpower because of our ingenuity and our work ethic,” he said. “True, those are great things that are uniquely American, but America is the country it is today because every time tyranny arose in this world, anytime someone challenged our ideals or values, our young men and women in the service stepped forward and got the job done.”

Veterans and current service members in all branches of the military took a solemn oath to defend the country against all enemies, foreign and domestic. The promise is made, Vaughn said, with no reservations “and backed up with a guarantee up to and including your life to protect this great country.”

“Because of that, a dream that started 250 years ago of all men being created equal and the ability to pursue life, liberty and happiness continues today,” he said. “We’re able to worship in our own way, elect our own leaders and speak out when we think things are wrong. And we’re able to do that without any fear of prosecution.”

Elsewhere in Rowan County, Michael Chapman, whose brother Staff Sgt. Chris Chapman was killed is Operation Desert Storm in 1991, organized at event at Happy’s Farm between China Grove and Rockwell. Chapman told a crowd of a few dozen that it’s important for people to thank veterans and current service members in addition to recognizing the true purpose of Memorial Day — remembering the war dead. People need to know their sacrifice will be remembered if they die and they’ll be thanked for their service if they return.

To paint a picture of the number of war dead, Chapman asked the audience to imagine driving around the region and not seeing any other cars or people.

During the Happy’s Farm event, veteran Rodney Cress said his life was saved multiple times in the jungles of Vietnam.

“I can never really repay them, but I can always remember them,” Cress said.