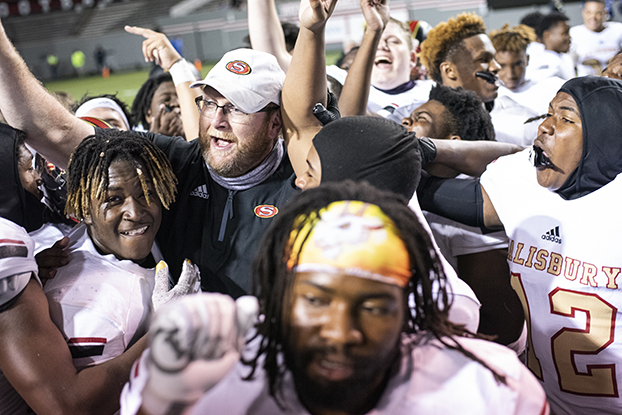 There was a state championship parade, followed by a birthday party for his 10-year-old daughter.

“I’m on daddy duty,” Hinson said. “Nine little girls coming over here, and I’m mowing the grass to get ready.”

The 2AA state championship made Hinson an easy choice for the Post’s Rowan County Coach of the Year. This is the fourth time he’s been honored and the third since he returned to the high school ranks at the helm of the Hornets in 2017.

It goes without saying that it was an unusual season.

While most Rowan teams had to settle for seven-game seasons, the Hornets pushed it to the maximum 11 and won their last nine.

The championship recognition on Saturday will leave Hinson with pleasant memories that will last long after his 10-year-old has grown.

“I was looking around today and nine of these players were there when I first came to Salisbury,” Hinson said. “A championship team is a four-year process and those guys formed the backbone of our program. I’m happy they got to experience winning a state championship. Now they’ve got a story for a lifetime.”