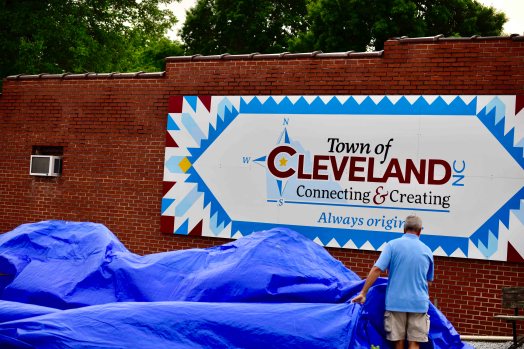 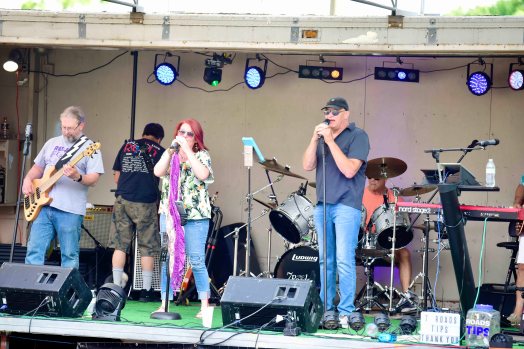 CLEVELAND — Shops on the corner of West Main and South Depot streets in Cleveland feature plain bricks no more.

On Saturday, the town unveiled a new landmark: its own barn quilt incorporating a new logo. The image takes the town’s new branding and the agricultural tradition of the West Rowan area to the middle of town and was a highlight of a daylong celebration.

The day kicked off with a Lions Club breakfast. Throughout the day there were open houses at the new West branch of Rowan Public Library, Novant Health’s West Rowan Family Medicine, the Cleveland Community Fire Department and a grand opening for Elsie’s.

Elsie Bennett, the owner and namesake and owner of the new ice cream parlor and general store, is also the mind behind the new barn quilt sign.

Bennett said she used the colors in the logo to create the quilt design and represent West Rowan. Bennett said the design works well for the area. She also is one of the local residents working on a barn quilt trail in the county.

“It’s a really good way to promote tourism in the community, but it’s also a better way to connect the community with one another and get them involved with art,” Bennett said, adding each quilt tells a story.

Cleveland Town Commissioner Richard Taylor said the town started thinking about creating a logo a few years ago. Once the logo was finished, Taylor said, the town wanted to find somewhere prominent to display it and waited to get some steady business in the shops.

“We’re just going to keep building on it,” Taylor said.

County Commissioner Chair Greg Edds came out for the reveal. He said it was good to see people returning to normal in the wake of the COVID-19 pandemic.

“Cleveland also is changing. They’re modernizing and they’re trying to do all the right things with their leadership and volunteers,” Edds said. “Cleveland is just a great example of how to really develop not just an economy but a community.”

Mayor Pat Phifer has been on the town board for 30 years. Phifer said Saturday’s celebration was a good step for the town because it’s “going to tell its own story.”

“We haven’t done that before. We’ve let everybody tell our story,” Phifer said.

The event was also the start of the town’s annual concert series, which was cancelled last year due to the pandemic. Thomasville’s 7 Roads Band started their set shortly after the quilt reveal.