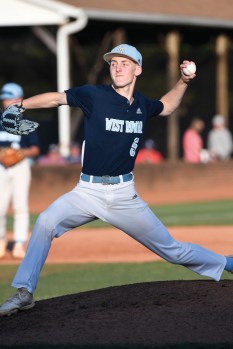 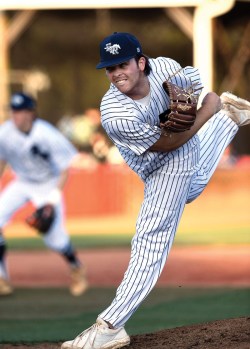 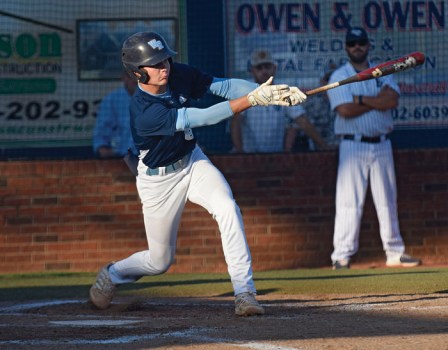 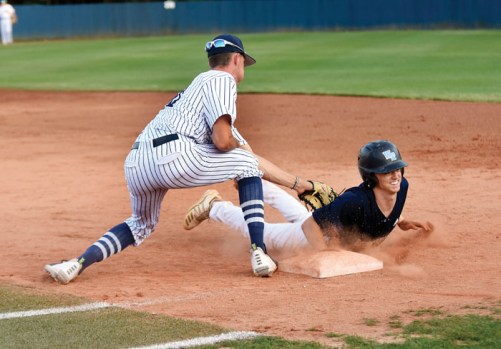 West's Andrew Kennerly 10 safe diving back to 1st with East's Chance Mako 10 trying to make the tag. photo by Wayne Hinshaw, for the Salisbury Post

GRANITE QUARRY — Not so fast.

That’s the message being delivered by West Rowan’s surging baseball team. Three weeks after staring down the barrel of an 0-2 NPC start, the Falcons have won four straight — including Friday night’s gritty, 7-4 victory at East Rowan — and find themselves contending for a title.

“We started slow this season, but we’re coming together now,” winning pitcher Casey Gouge said, moments after West (5-3, 4-2) moved into a three-way tie for second place behind frontrunner Carson. “Everyone stopped being heroes. We’re becoming a team, doing the little things like dropping a bunt, slashing a hit the other way and stealing bases. All those little things that count.”

None of that has been lost on longtime coach Seth Graham. On a night when West committed four errors and was outhit 10-5, it used Steven Smith’s three-run home run and rally-killing double plays in the third and fourth innings to avenge an earlier loss to the Mustangs.

“We told the guys after the last loss (2-1 to East on May 8) not to sweat it,” Graham said. “We knew it meant we’d have to be perfect if we want to make the playoffs, because they aren’t taking as many teams this year. So that’s how we’re approaching it, that one-game-at-a-time mindset. And this was a big game, but so are the next four.”

“First of all, you’ve got to tip your hat to Gouge. He threw a heckuva ballgame,” he said. “We hit some balls hard and had runners in scoring position, basically for the whole game. We just couldn’t get that timely hit. We were never out of it, never more than one swing away.”

Smith got the party started for West against losing pitcher Jake Hunter. Following walks to Andrew Kennerly and JT Fecteau to open the game, Smith turned on a heavy, 3-2 fastball and barbecued an inside pitch over the left-field fence. It was the team’s first round-tripper this season.

“I just wanted to hit the ball hard somewhere,” noted Smith, who recalled playing summer ball with Hunter. “It didn’t matter where. There were runners on base and I wanted to get them home.”

“Three-nothing was a big confidence booster for me,” said Gouge, who yielded only one earned run and struck out six in 5 1/3 innings. “That home run early made me feel I had a good chance and didn’t have to be perfect. I could throw my breaking stuff outside the strike zone when I wanted to.”

Two innings later, West extended its gait when Kennerly bunted for a leadoff hit and Fecteau sliced a hit-and-run triple into the right-field corner. Teammate Zander Burton’s two-run single with two away in the top of the fifth gave the Falcons a 6-1 advantage and chased Hunter.

“They got a good break in the first inning,” said Hatley. “One swing of the bat and we were playing catch-up all night.”

East never did, but squandered a golden opportunity in the last of the second. Griffin Warden skipped a leadoff single into center field and  DH Morgan Padgett followed with a ground-rule double. But Gouge worked out the pickle, fanning Hunter and Austin Fulk before inducing Chance Mako’s inning-ending groundout.

“It took a lot of battling,” Gouge said. “Seemed like I threw a lot of stressful pitches to get out of jams.”

“That inning may have set the tone for the entire game,” added Hatley.

East used Fulk’s two-out RBI-single down the right-field line to draw within 6-3 in the fifth inning. West scored an unearned run against Mako in the top of the sixth before Cameron Padgett scored on a wild pitch/throwing error gaffe in the last of the sixth.

“We’re still the underdogs,” Fecteau said afterward. “And the start of the season was not what we wanted. But right now, we’re playing as a team, not just for ourselves.”

And most assuredly, they’re playing for a state playoff berth.

NOTES: Hunter entered the game with a 2.19 ERA, but yielded six earned runs. He struck out eight and walked five in an 89-pitch effort. … Cameron Padgett went 3-for-4 and scored a run for the Mustangs. Teammate Jaxon Trexler was 2-for-4 with a double to left and a run scored. … Gouge threw first-pitch strikes to 19 of the 29 batters he faced and improved to 3-1. … Fecteau (2-for-3), Kennerly and Smith each crossed the plate twice for the Falcons. … Both teams play key conference games on Monday. East visits Carson and West hosts South Iredell.