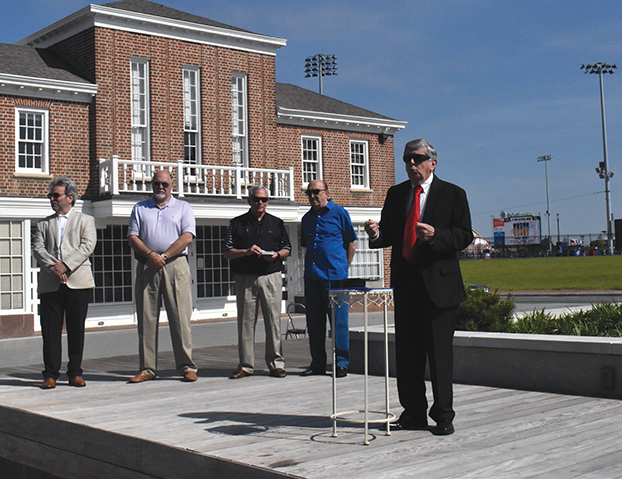 KANNAPOLIS — As he prepared to address the small crowd of people gathered before him in downtown Kannapolis on Wednesday morning, Mayor Darrell Hinnant paused while a rumbling piece of construction equipment traveled down West Avenue.

Once the machine moved past the gathering, Hinnant told the crowd he didn’t mind waiting for the noise.

“I’m not unhappy at all,” Hinnant said. “That’s an indication of the growth that’s going on in this community that prospers every single one of us.”

The sounds of construction, perhaps fittingly, delayed Hinnant’s official announcement that he will seek reelection for a third term as mayor in the city’s impending November election.

“We have lots to do and I want to be involved with leading this community for the next four years,” Hinnant said.

Although filing for municipal elections in Cabarrus County doesn’t open until noon on July 2, the city’s mayoral race is already beginning to take shape. Days before Hinnant gathered his supporters downtown, Kannapolis City Councilman Ryan Dayvault announced his intention to run for mayor with a post on Facebook.

“It’s always been an ambition of mine to continue helping my hometown and give back to the community that has helped shape who I am today, since I was in high school at A.L. Brown,” Dayvault told the Post. “I plan to continue my fight for the people of Kannapolis as I have for the past 9.5 years. I feel as if the timing is right to build upon what we have accomplished over the past few years, but with a careful eye on preserving Kannapolis’ hometown feel, its heritage, history and charm that so many people love throughout our town and region.”

Dayvault is currently serving his third term on the council after being elected for the first time at the age of 25. 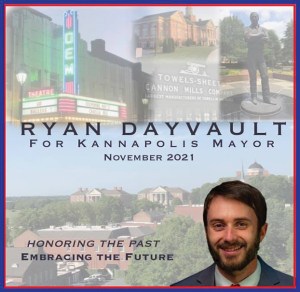 Dayvault, who is the facilities manager for the Nutrition Research Institute, said one of his goals as mayor would be to focus on developing areas outside of the city’s burgeoning downtown, including historic neighborhoods.

“We must not lose focus of these areas,” Dayvault said. “They are vitally important to our city’s success. We need to encourage smart and sustainable growth, and build communities, not just housing developments, that will lose value over time. We need to work within our historic neighborhoods to promote more housing rehabilitations instead of focusing solely on demolitions in those areas, so that these communities do not lose their character.”

Dayvault said he is “very honored and blessed by the positive reaction” to his announcement. While Dayvault said running against an incumbent is a challenge, open seats are hard to come by and he is the best candidate for “honoring our past and embracing our future.”

Rowell also took the opportunity to announce his intention to run for re-election to the council.

In addition to voicing support for Hinnant during his brief speech, Kincaid implored citizens to “leave the council the way it is.” Kincaid, whose own term isn’t set to expire until 2023, said he encourages people to re-elect other current council members Rowell, Dianne Berry and Doug Wilson, whose terms are set to expire in November.

Former city council member Roger Haas, who retired from the city council in 2019 after serving for 16 nonconsecutive years, also spoke in favor of Hinnant’s run. 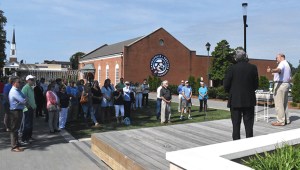 “This mayor has moved this city forward more progressively with more success than any mayor that this city has ever had,” Haas said.

Haas said Hinnant, who is largely retired but does some consulting work, has the proper time to dedicate to being mayor.

“The responsibilities are full time,” Haas said. “You can’t just have anybody to be mayor. He’s devoted more time, I’ve watched him, than anybody I’ve seen for this city. He’s logged thousands of hours, I would say, between here in Raleigh to lobby for this city and what he wanted to see happen in this city.”

Hinnant said Kannapolis has only a “small percentage of the way” through its downtown revitalization efforts and that he believes he’s the right person to continue the job.

Hinnant’s listed bringing in new jobs and promoting new growth while protecting against gentrification as some of his top priorities.

Having both served in city leadership roles over the past decade, both Hinnant and Dayvault can claim some responsibility in the city’s recent growth.

Leveraging the $52 million ballpark where the Kannapolis Cannon Ballers are currently playing their inaugural season, the city has helped catalyze economic expansion downtown. With a new parcel of town homes currently under construction and more economic advancement opportunities on the table, the city’s next mayor will oversee the coming wave of development planned for the city.