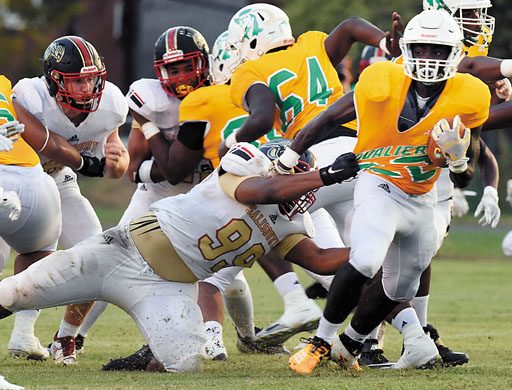 When Salisbury's Kevin Hayes (99) gets a hand on you, it's hard to escape — as this North Rowan runner found out. File photo by Wayne Hinshaw, for the Salisbury Post

High school football: No off days for Hayes in the trenches with Hornets

SALISBURY —  Game No. 10 is Friday. In spite of COVID, the Salisbury Hornets (7-2) have played almost a normal-length football season.

It was 35 degrees with cruel wind on April 1 when the Hornets lambasted Ledford, but it’s Margaritaville, a sweaty 84 degrees, as focused Hornets intensely prepared on Wednesday for the gathering storm. Next is the regional final, a road rematch with North Davidson, a rival the Hornets love to hate.

North Davidson (8-1) jumped on the Hornets hard and then held on 21-14 when the behemoths clashed on March 19 at Ludwig Stadium.

It’s a fact that Salisbury was on the attack on both sides of the ball the last 2.5 quarters, but all that really mattered was the bottom line.

Some of the Hornets are household names. We may get to watch outside linebacker Jalon Walker on Sundays someday. His recruiting saga capped by a Georgia commitment made national news. Quarterback Vance Honeycutt has size and speed and a baseball future that is unlimited. Interior defensive lineman Zae Clay made himself a legend with three state championship game sacks vs. Shelby in 2019. Central Carolina Conference linebackers may someday tell their grandchildren about how they were run over by Salisbury back JyMikaah Wells, a one-man buffalo stampede.

But it takes a ton of guys doing their jobs to get to this point. Hayes is one of the foot soldiers performing the dirty work in the trenches. He’s fierce, but not famous. He may only hear his name called out on the PA three or four times on an average night, but North Davidson knows who No. 99 is, just as Burns and Maiden now know. Wearing that 99 jersey, he’s the last name on the Hornets’ roster, but he’s one of the first  you have to account for if you’re game-planning for Salisbury.

“When you’ve got a 260-pound defensive end, it can make a team second-guess if they really want to run it to his side,” Hinson said.

Hayes is a formidable obstacle. He began this season at 260 pounds, although he’s melted down to a hard 249 over the last 10 weeks. Even at that, he’s still an unusually large and aggressive  high school defensive end. His size and strength make it tough to run at him, but he’s also nimble enough as a quarterback-chaser to be a factor in the pass rush. He can get at the quarterback in a lot of ways, including a brutal bull-rush where he’ll drive a back-pedaling blocker 10 yards into the QB.

“Kevin is one of the reasons we switched from a three-man front to a four-man,” Salisbury defensive line coach Wesley Jackson said. “He’s an impact guy and one of our most improved guys. Last season, his effort level was up and down. But as a senior, he’s found more consistency. He’s become more of a leader. He’s become a guy we know is going to bring 100-percent effort to every practice and every game.”

Jackson is a Salisbury firefighter with a passion for football. He said his boss, fire marshal Terry Smith, works with him as far as scheduling and gives him an opportunity to assist the Hornets.

“Sometimes I go in early to start my shift and sometimes I stay late,” Jackson said.

Hayes credits Jackson with many of the strides he’s made this year.

“As much the mental side of things as physically,” Hayes said. “I didn’t have a very good attitude last year. But we’ve got a lot of  young guys out there this year, and I knew that as a senior I needed to be a better role model.”

Hayes said he started turning things around personally during the darkest COVID days.

“I made COVID a positive,” Hayes said. “COVID gave me more time and I used that time to work on the things I needed to work on.”

Burns drove the ball 90 yards in the second quarter against the Hornets last Friday, a textbook, nine-minute drive from the Burns 9 that reached the Salisbury 1. Burns’ third-and-goal play from the 4 ran right into Hayes. He made the stop and forced a field goal attempt that failed. Ninety yards — no points.

“Wildcat snap on third down and the back came right to me,” Hayes said. “The man blocking me went down and there was no way I could miss.”

Besides his normal tackles and holding his ground to allow linebackers to make tackles, Hayes had a third-down QB pressure on a rollout that forced Burns to punt.

All in a night’s work. Just doing his job, he said.

But those were key plays he may not have made last year when he was more hit-and-miss.

“He had a lot of different stuff going on last year,” Jackson said. “Last year, I had to spend a lot of practice time fussing at him. This year, it’s been all about football, and that means we can spend our time working on his technique. He’s using that improved technique to make plays.”

No more ups and downs. Just ups for Hayes now.

“He’s a great example of what an improved mental approach can do for a player,” Hinson said. “He’s been better in practice, better in the weight room, better in games. There have been nights he’s been the glue that held everything together for us.”

A Salisbury-North Davidson preview will be published online today.