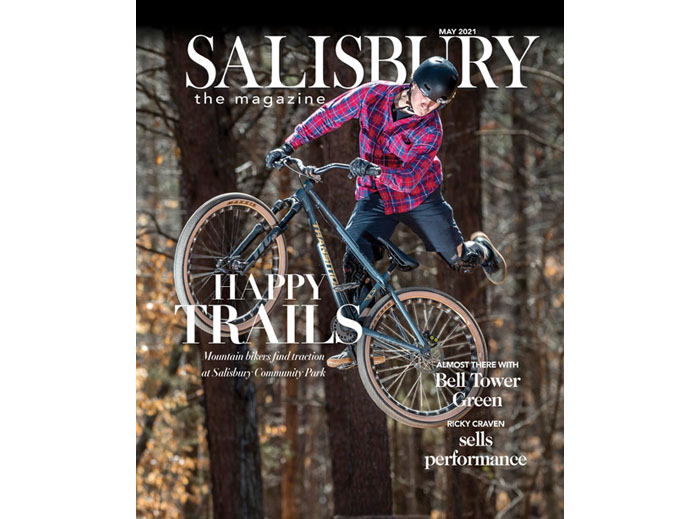 SALISBURY — The May issue of Salisbury the Magazine, a publication of the Salisbury Post, has reached subscribers and is now available at its normal distribution spots elsewhere in Rowan County.

The May edition’s cover features biker Will Kepley going airborne on a jump at the Salisbury Community Park Mountain Bike Trail. Photographer Sean Meyers shot the images for the story, which describes the dedicated volunteer effort that has gone into building and maintaining miles of mountain bike trails at the park.

In another feature, contributing writer Susan Shinn Turner and photographer Jon C. Lakey give readers an update on Bell Tower Green, the $12 million downtown park which nears an opening later this year.

Contributing writer Deirdre Parker Smith provides the inside scoop — and some recipes — on the cookbook that she wrote for Chef Jason Nain of Morgan Ridge Vineyards in Gold Hill. Many of the dishes included in “A Few of My Favorite Things” show Nain’s flair for Cajun flavors.

Elsewhere, the magazine looks at the unique partnership formed by Christopher Queen and Rick Turner in their new enterprise, Trees & Plants Nursery and Garden Center on Mooresville Road. They have transformed the site where the Hanford Florists greenhouses used to grow roses.

Historic Salisbury Foundation contributes another installment of When History Speaks. This time, HSF Executive Director Sada Stewart looks back on some of the wins and losses in local preservation efforts and how the past always informs the future.

On the Bookish page, Alissa Redmond takes a look at Kristy Woodson Harvey’s new book, “Under the Southern Sky.” Angie Boyd of Woodleaf submitted the photo for Through the Lens, and Doris Trexler provided the artwork for Salisbury’s the Place.

Salisbury the Magazine publishes nine times a year. The Summer (June-July) issue, now in the finishing stages, is expected to reach subscribers sometime in mid to late May and be distributed elsewhere in Rowan County after that.