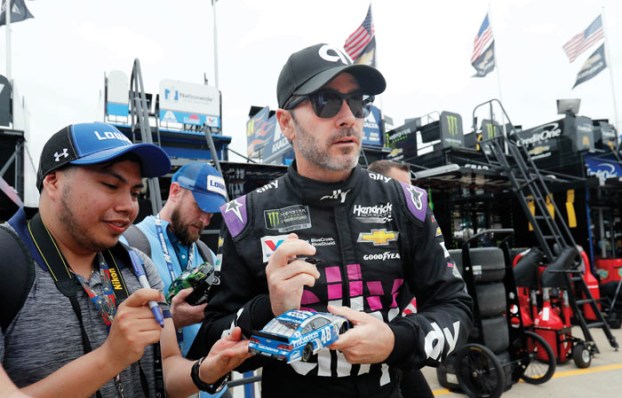 Jimmie Johnson says, ‘There’s some kind of shift going on and people are finally starting to lighten up about me. (AP File Photo/LM Otero)

CHARLOTTE — Jimmie Johnson, with wisps of gray in his beard, is a 45-year-old rookie in the IndyCar Series ready to reintroduce himself.

He’s a windbag, a craft-o-maniac, a guy who goes, is really into eggs and keeps things fresh.

Those are just some of the labels Carvana has tagged Johnson with in a series of seven spots highlighting the online car dealer’s first partnership with a professional athlete. The seven-time NASCAR champion begins his official transition to IndyCar this weekend with Sunday’s season opening race at Barber Motorsports Park in Alabama with three ads debuting during the NBC broadcast.

This won’t be the vanilla version of Johnson fans became accustomed to during 19 Cup Series seasons driving for buttoned-up Hendrick Motorsports. Those who know Johnson away from his day job have always decried his image, insisting he’s actually a hard-partying daredevil who never shies away from a bad idea.

Carvana, which is new to motorsports with its Johnson sponsorship and has a light sports marketing portfolio, decided to use Johnson’s true personality in making its ad campaign for the IndyCar season. It hired The Malloy Brothers for the spots and Johnson already knew both Brendan Malloy and Emmett Malloy through other connections.

He was comfortable when the Malloys came to him about using a laxative to demonstrate how quickly Carvana can complete a car sale, or eating seven hard-boiled eggs for the seven-day test  it out policy. Johnson even bedazzled a pair of jeans to demonstrate personalized financing options.

So who is this loose and easy-going Johnson? Same guy he always was.

“You know, this is just what I’ve figured in my own head and I’ve got nothing to back it up, but I’ve given people a reason to hate me for so many years, right?” Johnson said in an interview with The Associated Press.

“I was Jeff Gordon’s hand-picked guy and there was a crowd I was never going to win over. Then in my final year, people were like ‘OK, it’s his last year, he’s been here a long time, we’re not going to cheer him but we’re give him some credit.’ Now that I am not there, I wonder if there’s a fan base that has finally decided, ‘All right, he’s cool. He’s served his time. I respect him for doing something different.’ I don’t know, but there’s some kind of shift going on and people are finally starting to lighten up about me.”

The road ahead won’t be easy for Johnson as he unlearns two decades of driving a heavy stock car and adapts to a nimble, open-wheel machine against drivers half his age. Johnson is slated to drive just the 12 road and street course events on the IndyCar schedule for Chip Ganassi Racing with Tony Kanaan picking up the five oval races in the No. 48.

His barometers have so far only been in testing with his first true action this weekend. “I’ve got a lot of territory to cover yet and a lot of things I haven’t done yet. I haven’t had any practice yet, and I have to be honest with myself, I haven’t been through a race weekend yet,” Johnson said. “I haven’t qualified a car. I haven’t seen a track truly evolve. I’ve never been on a red tire, I’ve never been in traffic. I’ve not passed a car. I’ve not done a start or a restart. I’ve not done an in or an out yet lap. I just have so much stuff to learn.”

The challenge has invigorated Johnson, who won 83 Cup races and a record-tying seven titles but went winless his final three seasons.

After Alabama this weekend, he’ll look to his first street course, in St. Petersburg, Florida.