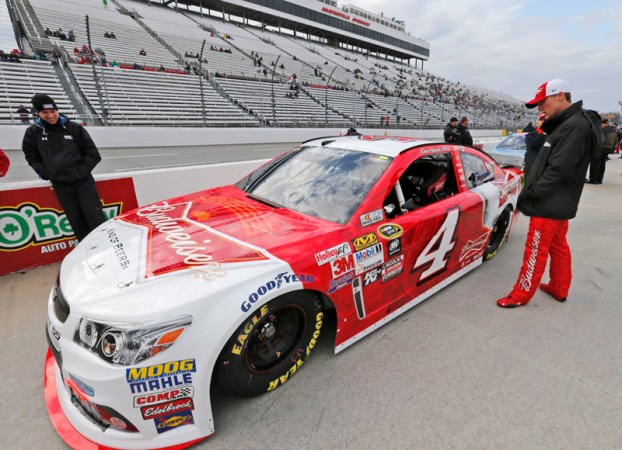 Kevin Harvick and other drivers will be hoping for sunny weather today at Martinsville Speedway in Martinsville, Va. (Associated Press file photo)

Downpours lead to delays at Martinsville

Racing will start at noon with the completion of an Xfinity Series event that was suspended after 91 laps Friday night. That race has 159 laps to complete, and the Cup completion will begin at 4 p.m. in conditions that weather forecasts suggest will be sunny and in the mid-70s.

Denny Hamlin passed pole-sitter Joey Logano just four laps into the race and led the rest of the way until light drizzle intensified and the drivers were told to come down pit road for a red flag delay. Conditions on the track were good, but pit road was very wet.

Climbing from his car, Martin Truex Jr. joked that visibility wasn’t much of a problem.

“You could see a lot more than we could at Bristol two weeks ago,” Truex said, referring to the dust that was so challenging when the series ran on dirt at Bristol Motor Speedway.

Weather forecasts all day called for rain around race time, and monsoon-like conditions arrived around the 7:30 p.m. scheduled start time. Jet dryers circled the track for more than an hour, then made two passes on pit road trying to limit the puddling. The race got underway at 9:25 p.m. before being called off.

Brandon Jones was leading the Xfinity Series race when the caution flag flew and, after two laps, it became a red flag as the cars were brought onto pit road and covered. NASCAR deployed a fleet of track drying machines, but the rain continued to fall and lightning was visible at times. The rain came on and off, along with efforts to dry the track, but when the sky opened again just after midnight, eventually accompanied by thunder claps and flashes of lightning, NASCAR postponed the conclusion until today.