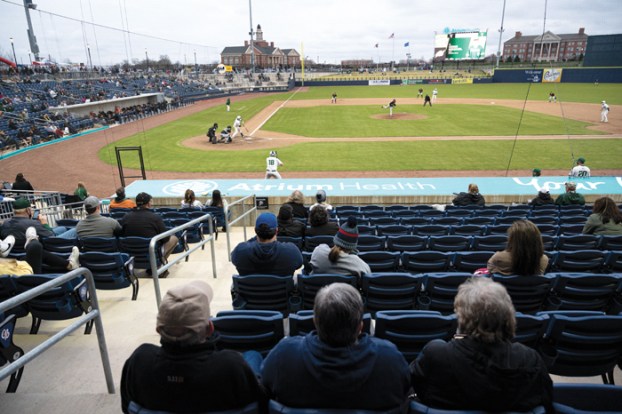 Josh Bergeron / Salisbury Post - Fans look on inside of Atrium Health Ballpark as UNC Charlotte and Appalachian State University played the first game at the city of Kannapolis’ new stadium. In the background is Kannapolis City Hall on the left and part of the N.C. Research Campus on the right.

The Catawba Indians will take on the Belmont Abbey Crusaders on Monday, April 19, at 6 p.m., just six days after a game between Queens University of Charlotte and Francis Marion University on Tuesday at 6 p.m.

“We are thrilled to welcome both Catawba College and Queens University to Atrium Health Ballpark later this month,” Kannapolis Cannon Ballers General Manager Matt Millward said in a news release. “We are lucky to have such a beautiful facility and using it to showcase our local colleges and universities is a perfect way to bring our community together.”

Tickets for both games will go on sale Thursday at noon through kcballers.com.

Located just 30 minutes from Atrium Health Ballpark, Catawba has found consistent success in Division-II over the last two decades. Inducted into the Catawba Sports Hall of Fame in 2015, coach Jim Gantt has led Catawba to 20-straight 30+ win seasons, including nine 40-win seasons since 2004. Gantt has been at the helm since the summer of 1996.

“We can’t wait to play at the Cannon Ballers stadium in Kannapolis,” Gantt said in a news release. “It is really exciting to be able to play in such a first-class facility, especially since it’s so close to home and our fans can enjoy it as well.”

Fans in attendance that call Rowan County home will notice a familiar face coaching Queens University’s squad on April 13. Ross Steedley, the Rowan County Player of the Year in 2007, is in his first season as head coach with Queens. Steedley had a successful college baseball career with the Charlotte 49ers, earning a spot on the All-Atlantic 10 First Team in 2011.

“I am very excited for our guys to play a game in the inaugural season at Atrium Health Ballpark. This is a great opportunity for Queens baseball and Queens University of Charlotte,” Steedley said in a news release. “Our administration, along with the Kannapolis Cannon Ballers, have done a lot of work behind the scenes and we can’t thank them enough for making this happen.”

Complying with all applicable government orders, a limited capacity of fans will be admitted to both games, with Cannon Ballers season ticket holders receiving first priority in securing tickets. Subject to availability, any remaining tickets will go on sale Thursday at noon through kcballers.com. Tickets for both games are priced at $10. All attendees will be required to follow local guidelines, included mandated face masks and social distancing measures.