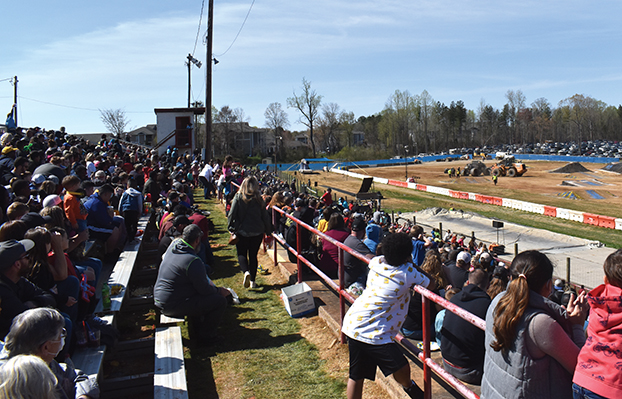 The stands at the Rowan County Fairgrounds were filled on Saturday afternoon with spectators who watched monster trucks take on dirt ramps. Ben Stansell/Salsibury Post

SALISBURY — The stands at the Rowan County fairgrounds were filled with enthusiastic fans on Saturday afternoon who roared with applause as monster trucks soared through the air before them.

“This was absolutely spectacular,” said Paul Slimick, Monster Truckz show director. “We had a great crowd out here today. A lot of energy.”

The mid-afternoon show was one of four performances being put on by Monster Truckz at the fairgrounds this weekend. The Sarasota-based company has two tours that traverse the United States, putting on high-octane performances in which monster trucks pop wheelies, spin around and show off acrobatic jumps. The Monster Truckz show at the fairgrounds was originally scheduled for November but was canceled due to pandemic restrictions.

Randall Barger, exhibits manager and events coordinator for the Rowan County Fair, said he was excited to see families once again flocking to the fairgrounds after a year where events at the venue were practically nonexistent. The fairgrounds are owned by the Rowan County Fair Association, a private company that generates almost all of its profit from hosting events.

“We’re just trying to hang on,” Barger said. “We lost the fair and then three years ago it rained the whole nine days of the fair. In five years, we’ve lost two fairs. It’s tough trying to depend on that.”

Barger said the number of people in the stands at the fairground may be the most he’s ever seen. It appeared to be hundreds, perhaps thousands, of spectators. To accommodate the large crowd, Monster Truckz added several metal bleachers of seating. Fans also watched the massive trucks race around from grassy hills to the left and right of the arena.

“This is the largest amount of people I’ve seen come to something at that (venue),” Barger said. 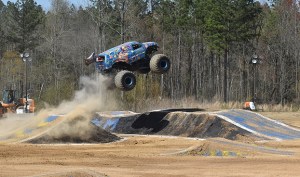 Monster trucks flew through the air at the Rowan County Fairgrounds on Saturday afternoon as a large crowd of fans cheered them on. Ben Stansell/Salisbury Post

Under current state restrictions, capacity for outdoor live performance venues is capped at 50%. Barger said he wasn’t sure what the official capacity of the fairgrounds is, but said the venue is 25 acres in total. Barger said it was up to Monster Truckz to ensure it was following state rules regarding COVID-19.

“I just rented them the space. It was up to the company to follow the guidelines,” Barger said. “The people that came here, hopefully, they were smart enough to wear a mask.”

Slimick said Monster Truckz has been touring throughout the pandemic and always worked to ensure it is following national, state and local regulations.

“We follow all of the local guidelines to a tee,” Slimick said. “Our office makes contact with whoever they need to and whatever chain of command at each level, whether it be city, county or statewide guidelines.”

Slimick said he wasn’t sure how many tickets were sold for the event.

Barry Hines was in the stands for the show after driving down from Winston-Salem with his grandson, wife and a family friend.

“It was my first time being at a monster truck thing, so it was good,” Hines said. “It was a lot of fun.”

Hines, who said he’s received the COVID-19 vaccine, did not feel like he was putting his health at risk by attending the crowded event. Hines said the Monster Truckz show was one of the first large-scale, in-person events his family has attended since the pandemic started.

“We went to the beach last year on the (Fourth of July) and on Memorial Day, but after that we said it was a little too crazy, we didn’t want to go to anything,” Hines said.

Hines and his family members wore masks, but he appeared to be in the minority. 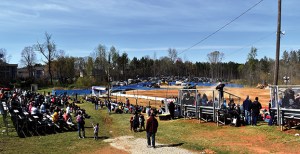 When the Monster Truckz crew rolled into town earlier this week, they used bulldozers and a compact loader to transform an empty lot of grass into its a dirt track complete with ramps of varying sizes. After the last show on Sunday, Slimick said they will return the tract of land to its original state.

“We’re going to leave the facility in much better shape than when we showed up,” Slimick said.

The last show Salisbury show will be held today at 2 p.m. Slimick said they usually only do three shows in a weekend, but added a fourth to accommodate the crowd sizes.

“It might be Easter Sunday, but what better way to spend your afternoon?” Slimick said. “The Easter bunny shows up in the morning and they’re like, ‘Hey, look kids, Monster Truckz tickets are in your Easter basket.”

The Rowan County Fair Association has a loaded slate of events scheduled for the fairgrounds in the coming months, including the Zerbini Circus and Hippie Fest in May as well as June Jam in June. A full list of events can be found online at rowancounyfair.net.