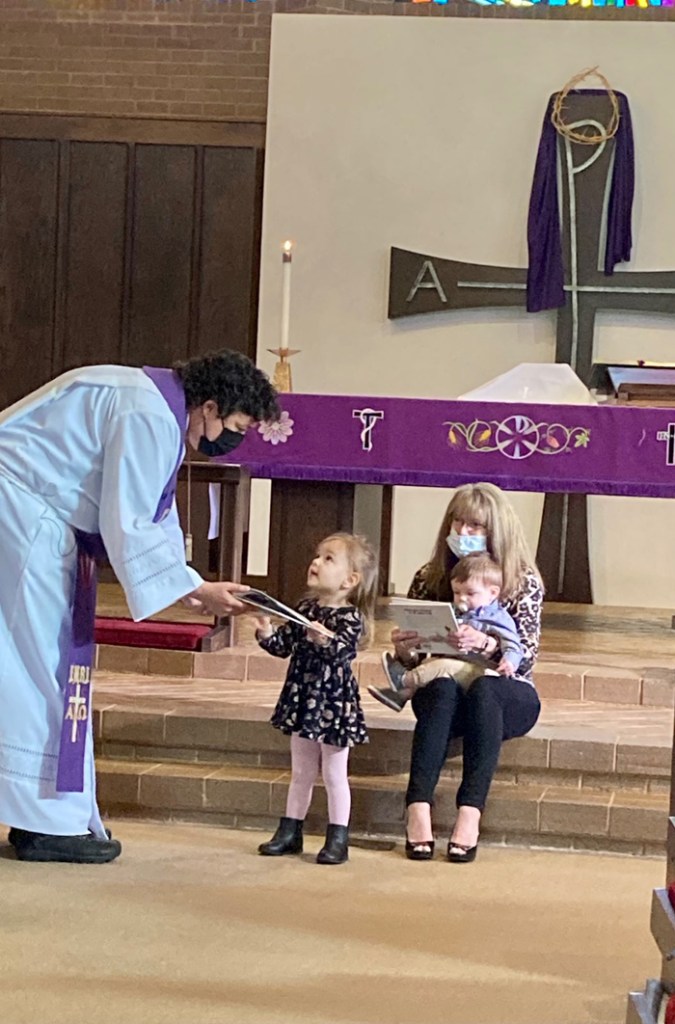 Submitted photo - Dawn Rister joins a family up front at Salem Lutheran Church. Rister lost her hair after contracting COVID-19 and it grew back curly.

SALISBURY — Dawn Rister almost died after being one of the first people in Rowan County to contract COVID-19.

On Maundy Thursday last year, she left the hospital after becoming seriously ill. She was placed on a ventilator and suffered hallucinations and nervous system issues among other symptoms.

Rister serves as pastor for Salem Lutheran Church and believes she and a few others contracted the virus during a church leadership on March 16 last year when they spaced out and talked about discuss the pandemic. She began to feel sick three days later. At the time, doctors expected her to spend up to six months fully recovering. A year later, she still has latent symptoms from her monthlong battle with the disease.

When she was released from the hospital, she used a walker for several weeks.

“My foot was numb right below my knee down to my toes,” Rister said. “I had tremors in my hands. Well, I still have those actually, and I still have some numbness.”

Rister has been undergoing physical therapy for the previous year and an electrotherapy treatment helped bring feeling back to her leg.

She still has muscle pain and occasional fogginess, but the biggest lasting symptoms are the tremors in her hands and some issues with elevated heart rate she takes medication to control. She lost hair as well, but it regrew and it came back curly. She had to wear a wig to her daughter’s wedding, but she was just happy she could be there.

Sometimes, she has problems with balance, but it is unclear if that was caused directly by COVID-19 or by hypoxia, low oxygen, while she was hospitalized. She said doctors initially thought many of her symptoms were due to hypoxia, but since have seen similar lingering symptoms in some cases when people have recovered from the disease.

“I probably got a double whammy with that,” Rister said.

She is participating in a study being conducted by the University of South Carolina on the long-term effects of COVID-19.

Sometimes, she just has trouble finding words. She said her church congregation has been supportive and say they do not notice when she needs to pause to gather her thoughts.

“I’m up there giving communion and the words just go away. So there’s this pause, but I guess the pause to me is more difficult than it is for the congregation,” Rister said. “I notice it more than other people do.”

Rister said she feels OK dealing with the symptoms because she know so many people have not made it through what she has.

“I can really relate to people’s suffering,” Rister said. “I know that may sound strange, but as a pastor I’ve been at a lot of bedsides whenever people were suffering.”

Now, Rister has been the one suffering, but she is grateful to be alive.

She said she saw Jesus’ hands when she felt like she was ready to go. That image helped her continue.

“He said to me, ‘It’s not time, but you will suffer and I’m with you,'” Rister recalled. “That sums up our whole journey here. It was the most powerful feeling. That doesn’t mean I haven’t gotten down, that I haven’t suffered throughout all this. I have. It’s been real, but I trust that God is with me in all of this.”

She described speaking to someone who had a similar experience of wanting to die but being told to hang on.

Rister said she would not want to relive her time in the hospital, but she is glad she lived through it.

“There was peace in my suffering,” Rister said.