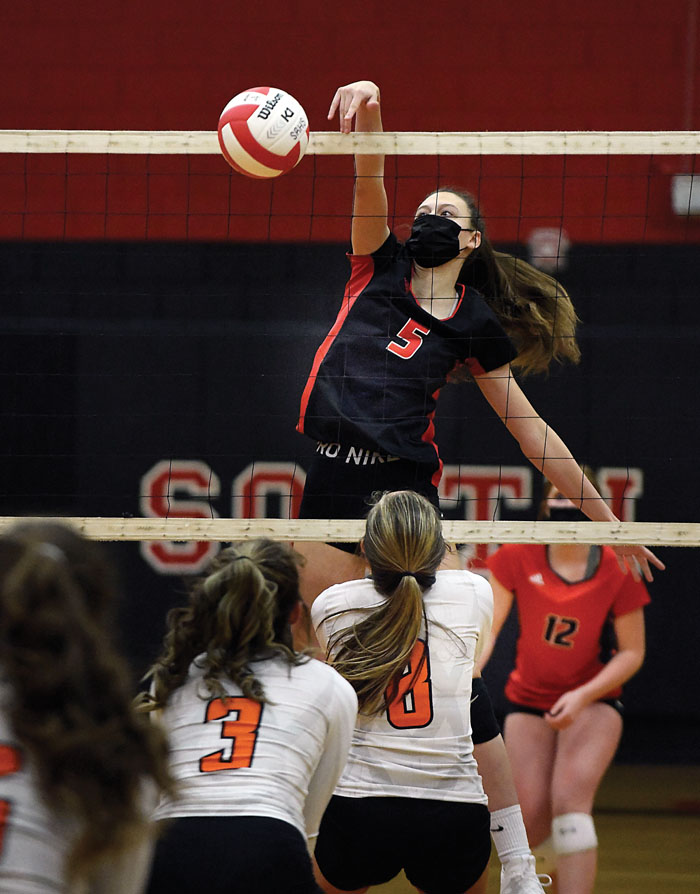 LANDIS — South Rowan senior Anna Rymer has always been a student first and a volleyball player second, so it’s no surprise that her next step was decided by an academic scholarship.

Rymer has received a Beckham Presidential Scholarship from Ferrum College.

It’s a “full ride” scholarship, which is the dream for every student-athlete. It covers full tuition plus room and board and is renewable for all four years of school.

“Ferrum was one of the schools I liked the most when I visited — nice coaches, friendly people, welcoming players — and the scholarship made it a pretty easy decision for me,” Rymer said.

She is one of 32 high school seniors who were accepted by Ferrum and were invited to apply. It’s a scholarship based on grades, test scores, academic achievements, leadership and community service. The process included an essay and an interview by a faculty member.

Rymer, who had her share of aces as a South server, had no trouble acing the scholarship process.

The 5-foot-10 Rymer had a tremendous volleyball career at South.

The Raiders were 83-18 in her four seasons playing for coach Jenna Horne, including 58-5 in Central Carolina Conference play. Her role changed each year, and she expanded her game each year. As a senior captain, playing for the first time in high school without her powerful first cousin Kira Rymer, she proved to be a devastating middle hitter. She had 369 kills, with only 45 errors, in a 17-game season. She did more than her share to keep South on top in the CCC.

Rymer was CCC Player of the Year,  shared player of the year honors for Rowan County with West’s KK Dowling and Carson’s Jaden Vaughn and was named to the High School OT All-State team. She had 53 kills in South’s two playoff games.

She was recruited by Ferrum as a middle, although she can probably play just about anywhere. Versatility is one of her strengths. While she was known for hitting, she was also a capable defender when she rotated to the back row.

COVID made the recruiting process different for everyone in the Class of 2021.

“It definitely was different in that we couldn’t go on overnight visits to schools and couldn’t play in matches with the players when we visited,” Rymer said.

She was recruited by some Division II schools, but most of her attention came from NAIA and Division III schools such as Ferrum. Schools that she seriously considered were Pfeiffer, Randolph and Columbia International, a program where Kira Rymer was an all-conference player as a freshman.

A visit to Ferrum moved it to the top of her list. The scholarship clinched it.

“Of all the schools I visited, Ferrum was the most middle-of-nowhere school, but I like that it’s in a rural setting,” Rymer said. “It’s about two hours away and in the middle of farms and countryside.”

Ferrum is in the Blue Ridge Mountains. Not only is the area postcard pretty with mountains, streams and forests, it has a classic-looking college campus.

Rymer’s likely major would be criminal justice or education. Ferrum has strong programs in both, and that’s an even bigger consideration than volleyball.

Anna said that Kira tried her best to recruit her for Columbia International, but when Anna got the Beckham scholarship, Kira understood her decision.

“She was really happy for me,” Anna said. “I’m excited. I know Ferrum is a place where I can get a great education and have a great time.”