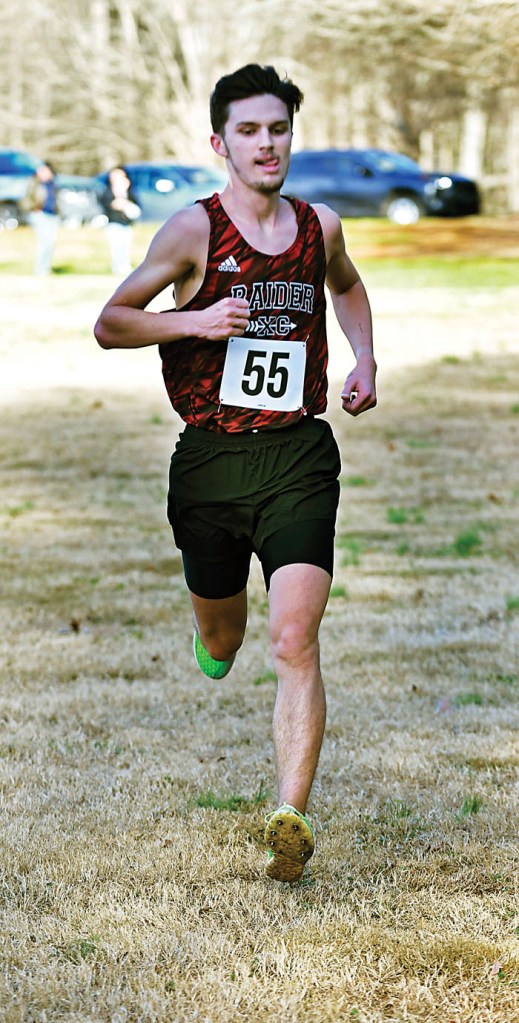 South Rowan's Noah Julian said he considered giving up cross country when he goes off to college, but ‘I’ve still got the love of running.’ File photo by Wayne Hinshaw, for the Salisbury Post

CHINA GROVE — South Rowan senior Noah Julian, the prince of Rowan County cross country the last three seasons and a force in track and field distance running, is still in the early stages of his race through life.

The next swift miles in his journey will be run for Lenoir-Rhyne cross country and track and field. Julian is headed to Hickory on a combination of athletic and academic scholarships.

“When I visited there, it was like I knew that I should be there,” Julian said. “I knew it was the best place for me to grow as an athlete, as a student and as a person. When the right offer, the right numbers, came in from Lenoir-Rhyne, I was very happy to sign.”

Life frequently moves in a circle.

Julian’s great-grandparents on his mother’s side — CP and Martha Fisher — met when they were students at Lenoir-Rhyne, part of a long chain of events that led to Noah being born.

Maybe that helps explain why Lenoir-Rhyne felt like home. His great-grandfather was among the biggest football fans the Bears ever had.

Julian has run for so long and in so many places that he’s seen more college campuses than most 60-year-olds. He’s been everywhere from South Bend, Ind., to Lawrence, Ks., to Chapel Hill and Charlotte.

So he knew what he was looking for as far as a campus and a school.

“Lenoir-Rhyne is such a great fit,” Julian said. “Close enough that I can come home on the weekend if I want to, but far enough way at the same time. I liked both coaches, and they’re bringing in an exciting recruiting class. I already know a lot of those guys.”

Julian considered a wide range of alternatives regarding his future.

One of his options was just going out on top as a three-time conference and county individual champion and the ringleader of a golden era for South Rowan cross country — three county team titles, plus two conference team titles in a very competitive 10-team league.

“It’s a been a few months now, and looking back on it, we had an amazing cross country season as regional runner-up and with a top-five finish in the state in 2A with three seniors and four freshmen,” Julian said. “I seriously did consider hanging up the spikes and just being a regular college student, but I’ve still got the love of running.”

He explored walking on with a Division I program, and he really liked what he saw when he took a trip to UNC Wilmington. He said Wilmington will be at the top of the list when his academic career reaches the post-graduate phase.

He also considered military schools. He looked at Navy and made the trip to Charleston, S.C., to tour the beautiful campus at The Citadel.

But nowhere felt as comfortable as Lenoir-Rhyne.

The only time Julian didn’t win the Rowan County Cross Country Championship during his high school career was when East Rowan senior Sean Incardona took the title when Julian was a freshman. Incardona is part of the team at L-R now, so Julian will join him there.

“I’m hoping to run summer miles with Sean and I’m looking forward to being friends with him,” Julian said. “And (East Rowan graduate) Adalie Harrison is also on the cross country and track teams at L-R. I’ve been very good friends with her for a long time.”

Julian plans to major in psychology. The analysis of people is a subject that fascinates him. He’ll figure out the best way to use that degree.

As far as analyzing his college decision, he has no lingering doubts about it.

“I know I made the right choice,” he said. “Once I started getting the acceptance letters and taking a look at everything, L-R definitely was the best option.”

While Julian can’t wait to compete for the Bears, his high school athletic career isn’t over yet.

The track and field season will be starting later this month.

“I’ll be graduating in less than two months, so this is an exciting time,” Julian said. “But I don’t want to start thinking about college just yet. This high school track season is important to me. There’s still a lot I want to achieve as far as records and team accomplishments.”