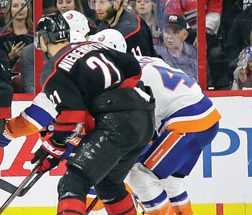 Carolina's Nino Niederreiter gave the Hurricanes an early lead but they did not keep it for long. (AP File Photo/Gerry Broome)

Robby Fabbri snapped a tie midway through the second period, sending rebuilding Detroit to just its ninth win in 30 games. The Hurricanes entered the game only one point shy of the NHL leaders.

Erne’s two goals in the first period lifted Detroit to a 2-1 lead. Fabbri’s go-ahead goal was set up by Dylan Larkin’s drop pass with 7:32 left in the second. Filip Hronek had an empty-net goal in the final minute, sealing the victory.

Nino Niederreiter gave the Hurricanes a 1-0 lead 2:21 into the first, and Sebastian Aho tied it at 2 early in the second. Carolina’s James Reimer made 24 saves.

Carolina beat last-place Detroit 2-1 on Sunday night and moved into the Central Division lead ahead of Tampa Bay and Florida. The Hurricanes went into Tuesday’s game in second place, a point behind the surprising Panthers and a point ahead of the defending champion Lightning in the division.

Detroit had won only one of its previous six games, but it competed very well with one of the league’s best teams.

The Red Wings had a one-goal lead after a first period in which they outshot the Hurricanes 15-7 and scored on two of three power plays.

Carolina had a power play in the opening minute and took advantage on Niederreiter’s tap-in goal from the top of the crease.

The Red Wings made the most of a power-play opportunity early in the opening period, making it 1-all when Erne scored off a rebound created by Filip Zadina’s one-man rush and shot.

Erne scored his fifth goal on another power play midway through the first. He converted a one-timer from the slot while Reimer was without his stick.

Aho’s one-timer from the right circle off Martin Necas’ pass from the left circle made it 2-all 1:50 into the second.

The Hurricanes pulled Reimer with 2:01 to go and Hronek scored into the empty net with 26 seconds left for his first goal since Jan. 14, 2020.

Detroit’s Bobby Ryan was scratched with an upper-body injury, missing a game for the first time since the opener against Carolina two months ago. Ryan, who turns 34 on Thursday, has six goals and 13 points in 28 games and is potentially a trade target for a contending team.

Carolina fell to 0-3 when trailing after two periods while Detroit improved to 9-0-1 when entering the third with the lead.