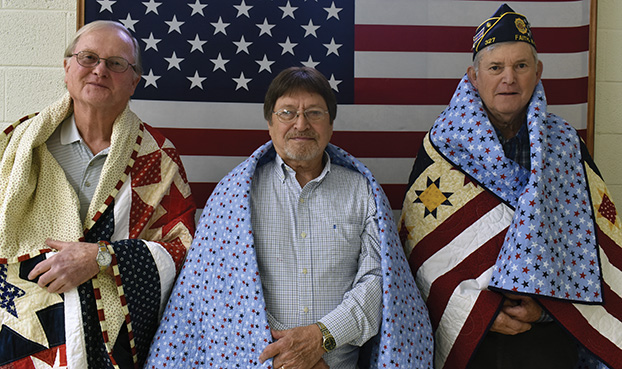 Greg Peeler, Ricky Lee Thomas and Dales Gardner were honored for their service in the Vietnam War with quilts during a ceremony on Saturday afternoon. Ben Stansell/Salisbury Post

FAITH — Draped in a red, white and blue quilt, Ricky Lee Thomas stood in front of a small crowd at American Legion Post No. 327 on Saturday afternoon and told the story of the time his brother saved his life.

Thomas and his brother, Jimmy, were serving in the U.S. Navy together during the Vietnam War and were on a ship that was unexpectedly attacked.

“I wasn’t paying attention and he hit me with a bag of chains and knocked me on the floor and then died right on top of me to keep me from getting blown off the ship,” Thomas said.

That’s why Thomas, overcome with emotion for a moment, accepted the quilt on behalf of his brother.

“I wish my brother was here,” Thomas said. “This means a lot to me, so I accept this for my brother Jimmy, who is no longer with us. I appreciate what he did for me.”

Thomas was one of three Vietnam War veterans who were honored during the ceremony with a quilt made by the Grateful Quilters of Mooresville, a local chapter of the national Quilts of Valor Foundation. As of Feb. 27, Quilts of Valor has awarded 269,505 quilts to veterans nationwide. The quilts are meant to show appreciation to military veterans for their sacrifice and service.

Greg Peeler and Dales Gardner, both members of American Legion Post No. 327 who served in the U.S. Army and fought in Vietnam, also had handmade quilts placed around their shoulders in front of a small contingent of family and friends.

For the three veterans, the ceremony served as a show of appreciation that they didn’t receive when they returned home from fighting in a war that was extremely controversial at the time.

“Since we were never recognized up until the last several years, this was kind of a big thing,” Peeler said. “I really enjoyed it. It was really nice because we didn’t get recognized when we came home.” 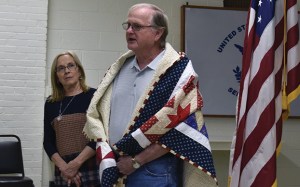 After receiving his quilt, Greg Peeler spoke about his time serving in the U.S. Army. Ben Stansell/Salisbury Post

During his time serving in the army from 1967 to 1969, Peeler earned several medals for his valor. Among them is a Purple Heart and a Valorous Unit Award, given to units that display extraordinary heroism in action against an armed enemy.

Gardner fought in the Army from 1969 to 1971, serving with the 101st Airborne Division. In addition to a Bronze Star, Gardner was awarded a Combat Infantry Badge and a Vietnam Service Medal.

Thomas was nominated to receive a quilt of valor by his sister, Renee Barker. Both Peeler and Gardner were nominated by Ryan Smith, commander of American Legion Post No. 327.

“I’m really honored to have selected those two guys,” Smith said. “They’re well deserving of it for sure.”

Smith, whose grandfather was a veteran and charter member of the American Legion Post No. 327, said that has known Peeler and Gardner since he was a child.

Smith said that this was the first time he’s nominated a veteran for a quilt of valor, but he anticipates nominating several other members of the Legion Post in the future.

“There are others that we can do,” Smith said. “We have some World War II guys who are still alive. There’s one who served in (Gen. George) Patton’s tank unit. He’s our oldest member.”

Gardner said that he hopes the three veterans who were recognized on Saturday will be the first of many.

“This was a real privilege,” Gardner said. “All of us haven’t been recognized. I hope a whole lot more people will be recognized.”

The quilts presented during the ceremony were handmade over the past several weeks by members of the Grateful Quilters of Mooresville. Sharon Bormann, the group’s leader, drove over from Mooresville to lead the ceremony and present the quilts. 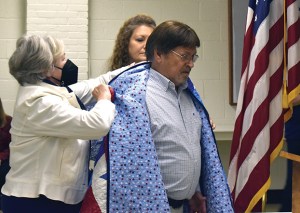 Inspired by her husband’s military service, Bormann started volunteering with the Quilts of Valor organization about a decade ago. Since then, she has helped make dozens of quilts. While she enjoys the process of putting the quilts together, her favorite part is presenting them.

“It’s special to my heart because my husband served in Vietnam,” Bormann said. “That’s one of the reasons I do this. I just have a special part of me that loves awarding veterans for what they’ve done for us.”

When given the opportunity to talk about their military experience, each veteran said they would serve again.