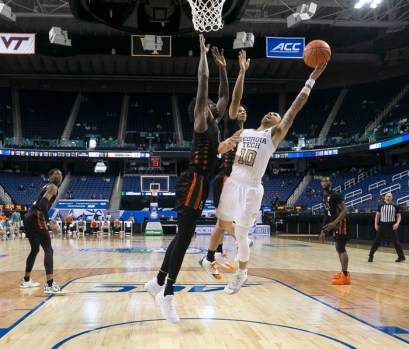 Georgia Tech’s Jose Alvarado puts up a left-hander as Miami defenders close in Thursday in Greensboro. Photo courtesy of ACC 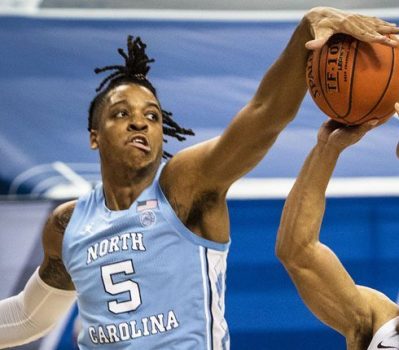 File photo courtesy of ACC -- Armando Bacot will be one of the keys in how far the Tar Heels advance this season.

Freshman RJ Davis added 14 of his season-high 19 points after halftime for the sixth-seeded Tar Heels, including three of his four 3-pointers to set up a matchup with No. 15 Florida State.

Bacot scored 13 of his points after halftime, including a run of 10 in a row as UNC (18-9) used a 11-2 run to break a 49-all tie. Bacot’s flurry included a pair of second-chance baskets, part of the Tar Heels increasing the intensity on the glass to finally assert some control of a tough, physical game.

Bacot finished with nine rebounds in the second half, part of the Tar Heels’ 27-17 edge on the glass in the final 20 minutes.

Justyn Mutts scored a season-high 24 points on 10-for-16 shooting for the third-seeded Hokies (15-6), who were playing their first game since Feb. 27 after having their last two regular-season games canceled due to contact tracing.

The Tar Heels will face second-seeded Florida State, which advanced when the Seminoles’ quarterfinal matchup with Duke was canceled.

Jordan Usher scored 13 of his 15 points in the second half, including a game-clinching dunk created off a sterling play by Jose Alvarado, and Georgia Tech ended Miami’s run in the ACC tournament.

Miami’s Kameron McGusty hit a 3-pointer with 32 seconds left to get the Hurricanes (10-17) within two points. Following a Miami foul, Alvarado saved a poor inbounds pass in the backcourt as he flew out of bounds, passing it to teammate Bubba Parham. Parham returned the ball to Alvarado, who found Usher alone for the clinching dunk with 19 seconds left.

The Yellow Jackets (16-8), with seven straight wins, solidified their bid to reach the NCAA Tournament for the first time in 11 years and will take on top-seeded and No. 16-ranked Virginia in a  semifinal today. The Cavaliers advanced with a last-second win over Syracuse.

Alvarado, the ACC defensive player of the year, and Michael Devoe finished with 13 points each with Devoe collecting seven assists. Alvarado sat out the final 3 1/2 minutes of the first half after he banged knees with Miami’s Isaiah Wong and was helped off the court in obvious pain. He returned to start the second half.

Moses Wright, the ACC player of the year averaging 18 points and eight rebounds a game, sat out eight minutes of the second half with four fouls, eventually picking up his fifth and leaving with just seven points for fourth-seeded Georgia Tech.

Miami, the 13th seed, won its first two games of the tournament and was ahead by four at halftime but an eight-minute spell without a field goal led to a four-point lead dissolving into a seven-point deficit.

McGusty finished with 25 points and seven rebounds for Miami. Nysier Brooks added 19 points, just three in the second half, and Wong had 12.

Reece Beekman hadn’t made a shot all afternoon for 16th-ranked Virginia when the ball swung his way in the final seconds of a tie game.

Beekman buried a 3-pointer as time expired to help the Cavaliers edge Syracuse 72-69 in Thursday’s quarterfinals of the Atlantic Coast Conference Tournament, a shot that sent Beekman and his teammates sprinting around the court in celebration.

Beekman was 0 for 5 from the field when Kihei Clark penetrated to the left elbow and then zipped the ball to Beekman waiting on the right wing. He launched a confident catch-and-shoot 3 with the horn sounding as the ball hit the high point of its arc before dropping cleanly through the net for the top-seeded Cavaliers (18-6).

“I was just thinking: it’s a big shot,” Beekman said. “My coaches, everybody believed in me, so they wouldn’t have me out there for no reason.”

Almost immediately, the 6-foot-3 guard started sprinting towards the other end of the court with his teammates pursuing him at full speed. They finally caught up with him and gathered at the far baseline near the Syracuse bench to celebrate.

“That’s what March is,” said teammate Sam Hauser, who confidently raised his arms signaling the 3 would be good as Beekman launched the winner.

Yet that confidence belied the fact that Beekman had made only 8 of 31 3s (25.8%) all season entering Thursday.

Buddy Boeheim finished with a career-high 31 points for the eighth-seeded Orange (16-9), a day after he scored 27 points in Syracuse’s tournament opener. He nearly lifted the Orange to another win to help their NCAA Tournament chances.

After Beekman’s shot fell, Boeheim stood near midcourt, hands on his knees in disbelief, while teammate Quincy Guerrier squatted down a few feet away.

The Orange entered the week near the cut line in most NCAA projections, though a win against fellow bubble team North Carolina State on Wednesday helped that case. Afterward, Boeheim said he thought the Orange “did what we needed to do this year” but with a wait-and-see caveat.