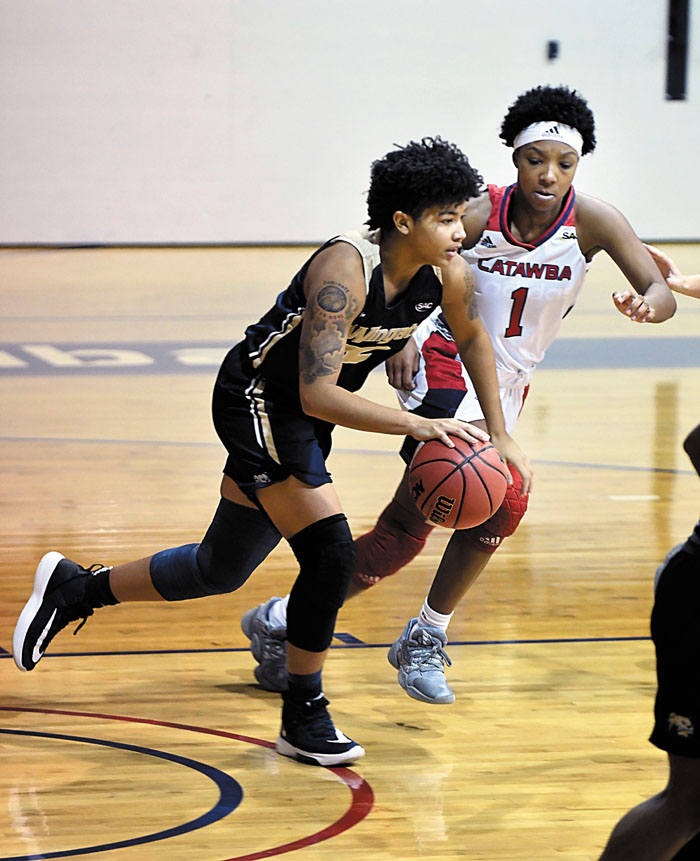 WINGATE — From Jan. 20 to the end of Wingate’s season, sophomore Bryanna Troutman may have been the South Atlantic Conference’s best player.

In the final dozen outings of her 20-game season, the 6-foot-2 forward averaged 17.2 points, while shooting right at 50 percent. She added 10.1 rebounds per game.

Against SAC tournament finalist, Lincoln Memorial, the former Salisbury High standout racked up 25 points and 15 boards to lead the Bulldogs to victory. Against a tough UVa-Wise squad that finished fourth in the 13-team SAC, Troutman pulled down 20 rebounds to spark an upset. She put up 21 and 14 against nationally ranked Carson-Newman and wrapped up her season with a 24-point outburst against Newberry.

Troutman, who will celebrate her 20th birthday in a few weeks. was honored recently as a first team All-SAC player in a league stacked with talent. To make first team on a 10-10 squad isn’t normal stuff, so she impressed a lot of coaches.

“My coach (Ann Hancock) is always telling me that she needed me to be an All-SAC player and I told her I promised her I was going to be that kind of player,” Troutman said. “When people believe in you, that’s when you start believing in yourself.”

Troutman was a good player as a freshman and posted a double-double in her college debut.  She averaged 9.1 points and 7.2 rebounds as a starter, but she took a jump in her second college season, even though it was a COVID-shortened one.

“The biggest reason I played better was just the extra experience and maturity,” Troutman said. “I was able to stay a lot calmer in games. I thought more. I was comfortable with the coaches and with teammates that I knew were counting on me. My teammates were my biggest strength through everything.”

There were challenges. Wingate was in a COVID pause for almost the entire month of December and didn’t play a game for 27 days.

“That was our only stop, but it was a long stop,” Troutman said. “There was a day we got on the bus and then turned around after about five minutes and came home because the team we were supposed to play had a positive test. There was always some uncertainty about the next game and the next week.”

On the night of Jan. 16, Troutman had a rough game, shooting 0-for-5, committing three quick fouls and only playing nine minutes in a close loss to Anderson.

But after that, she was a different player. She was determined to bring it every night, vowed to not let her teammates down again.

In her last 12 games, she scored in double figures 11 times and put up five double-doubles.

That was extraordinary production from someone who averaged 23 minutes per game. Most All-SAC level players are on the court 34 minutes every night.

“For people who haven’t seen me play since high school, the biggest difference is the strength I’ve gained in the weight room,” Troutman said. “And I’ve added to my versatility.”

While Troutman’s success is exciting, it’s not shocking.

She was a program-changer for the Salisbury Hornets, who started winning again when she arrived as a freshman. She was an intimidating post presence, but also someone who could move and shoot and handle the ball and pass.

She scored 1,614 career points and earned the Central Carolina Conference Player of the Year accolade as a senior when the competition included 2,000-point scorers Janiya Downs (South Rowan) and Lyrik Thorne (Ledford), who now play together for Wingate’s rival — Catawba.

“Bryanna is a special athlete who can play four positions,” Salisbury coach Lakai Brice said. “She was a program-turner for us. Unselfish and a great teammate. One of the best ever at Salisbury.”

Catawba tried hard to bring in Troutman to play with Thorne and Downs. She also was recruited by several Division I schools, but she fell in love early on with D-II Wingate’s campus and atmosphere.

She’s still happy with her decision and is  succeeding in the classroom as an exercise science major.

“College was a very big adjustment in so many ways,” Troutman said. “I’m still adjusting, but I’ve got a 3.3 GPA. School is going well.”

And so is basketball.