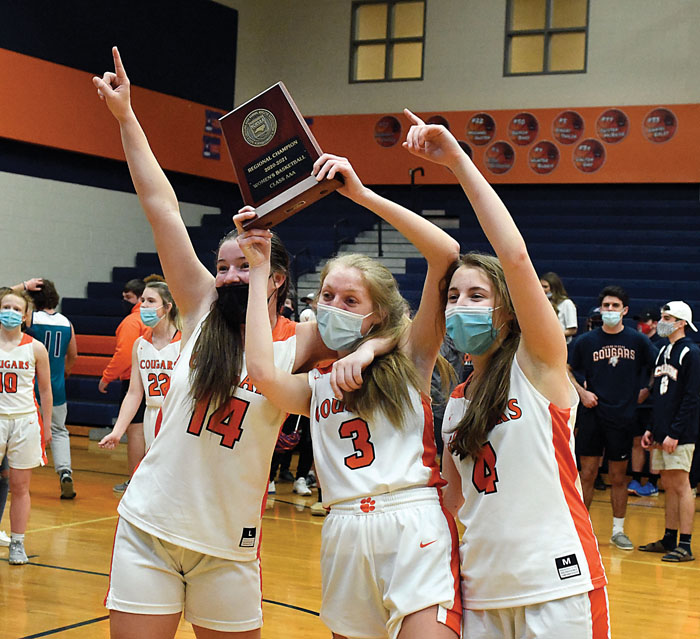 The result was a 62-45 win against Hickory in the 3A West Regional final.

“A regional final, that’s always played at a neutral site, so to get to play it at home like this, that’s crazy,” Carson head coach Brooke Stouder said. “This has been the craziest season ever, but I believe our girls have made the most of every moment. They’ve faced all kinds of challenges and obstacles, but now our seniors will finish their careers in a state championship game. I couldn’t be prouder of them or happier for them.”

Hickory (11-3), which upset top-seeded Freedom on Saturday to put the regional final in China Grove, towered over the Cougars.

Carson played again without Mary Spry, a high-percentage 6-footer who suffered an ankle injury early in the second-round win against Cuthbertson. Hickory had a 6-foot-4 Division I athlete in Kellen Morin (Virginia Tech volleyball signee) and a 6-foot Queens basketball signee in Finley Lefevers, but it didn’t seem to matter much. 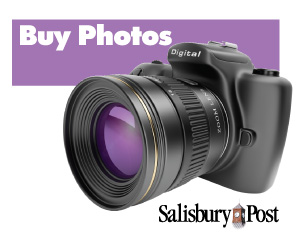 “We always find a way to get it done,” said Carson senior Carleigh Perry, who had the defensive task of fronting Morin. “We weren’t worried about their height advantage.”

Carson’s tallest players were 5-foot-8, but the Cougars (18-0) are experienced and relentless and can transition from defense to offense in a hurry.

“This group has a special cohesion,” Stouder said. “They always have.”

Lani Isley replacing Spry in the starting lineup subtracted a lot of inches, but it added another ball-handler. Isley was outstanding. She made great decisions, had three assists and turned in a feisty floor game.

Carson senior guard Ellie Wilhelm was unconscious — in a good way — early. Hickory was losing track of her, and Wilhelm was drilling soft jumpers. She hit two 3-pointers for a 6-0 lead, with the second one coming off a quick swing of the ball out of the post by Carleigh Perry. Wilhelm’s third outside shot made it 10-0 barely three minutes in.  It was 12-0 before the shellshocked Red Tornadoes could get on the board.

“When you shoot the ball as well as we did early, it’s easy to play with confidence,” Stouder said. “We played with a lot of confidence.”

“Our defense was so good that it was getting us out in transition and getting us open shots,” Wilhelm said. “We can shoot, but everything we do is based on our defense.”

Hickory, led by guard Chole James, started to settle in, but Carson still led 24-12 after a quarter.

Hickory enjoyed a 7-0 run in the middle of the second quarter, but Carson kept coming. It was 41-25 at halftime. Carleigh Perry, who had eight rebounds, had scored 15 points, quite a few of them layups off inbounds plays, while Wilhelm had 14.

The breeziness stopped for Carson in the third quarter. The Cougars turned it over a lot and missed a lot, as Hickory slowly sliced its deficit to single digits. Carson didn’t make a field goal for over six minutes. Finally, Wilhelm flipped in a little scoop shot coming down the lane to make it 45-34 with 1:41 left in the quarter.

Carson took a 47-38 lead to the fourth quarter, and it might have been closer if Morin hadn’t been plagued by foul trouble.

“I still wasn’t worried,” Carleigh Perry said. “They’re a good team, and good teams are going to have a run. But it was a little run.”

Hickory still had a fighting chance until Colbie Perry measured a 3-pointer from the left side and drilled it with 6:55 left in the game to push the lead to 50-38. That was probably the game’s critical shot.

“That’s my shot and I took it with confidence,” Colbie Perry said. “I usually shoot my best when the team needs one, and we needed that one. I didn’t rush. I didn’t get nervous. I shot it like it was just another game.”

When Hannah Isley, who took two charges and grabbed six rebounds, headed fearlessly to the rim to make it 54-40 with 4:57 left, it was all but over.

When Carleigh Perry made a steal and got the ball out to Hannah Isley for a hoop-plus-a-foul in transition with 4:23 left, Hickory was finished.

After making a few free throws, the Cougars started making plans to play Asheboro Saturday for the 3A championship. The time and venue is TBA.

Wilhelm scored 18, while the Perry cousins combined for 27. Hannah Isley had 11.

Now it will be remembered for a regional championship, as well.

“Rough third quarter and not a great fourth quarter, but we battled through all of it,” Stouder said. “This is wonderful. This is historic.”