High school basketball: Hornets lose a tight one in playoffs 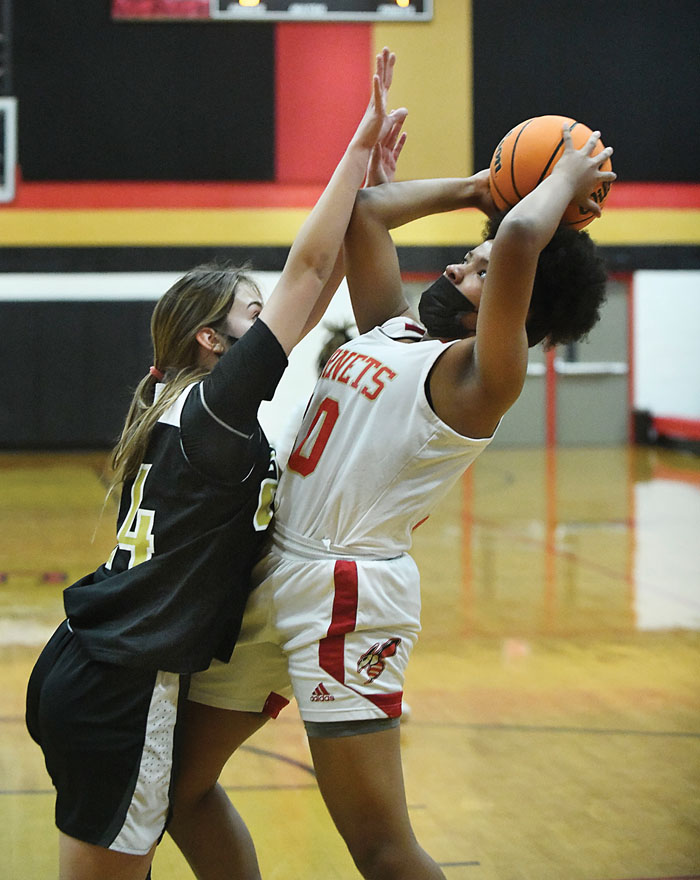 SALISBURY— Jaleiah Gibson’s jumper from the lane wiggled off the front of the rim in the final seconds, and Salisbury’s girls basketball team lost 48-46 to visiting Shelby.

Teammates Kyla Bryant and Jamecia Huntley made the passes that led to Gibson getting a clean look from the lane. She’s not a big scorer, but she’d made a couple of jumpers already and she let this one fly without hesitation.

It was close, but it didn’t fall for her.

“It was a fantastic game,” Salisbury head coach Lakai Brice said. “We missed some opportunities, and things didn’t go our way in the end, but I couldn’t be any prouder of how we fought. We got a good shot and we took it. That’s all you can ask.”

A lot happened in the second-round playoff game to get to that last shot, including a Salisbury comeback from an 11-point deficit to get even.

Ally Hollifield made the shot that proved decisive, a tough runner with about a minute to go. Salisbury fans barked that she walked to free herself, but there was no whistle. As far as the shot, it was a thing of beauty.

It was, from everyone’s perspective, a monumental game that could’ve easily been a fourth-rounder or a regional final, but with random bracket seeding this season, the two powers collided early.

Both were eliminated by Newton-Conover in last season’s playoffs.

“We did expect to see Salisbury at some point in the playoffs, and they were every bit as good and strong as they looked on film,” Shelby coach Scooter Lawrence said. “We were in a very similar game to this with Newton-Conover last year, but weren’t able to finish. This time we finished.”

Shelby’s defensive plan worked so well in the first half that Bryant and McCullough had only three points apiece at the break. But the Hornets were still in the game, down 31-26. They’d gotten points from Gibson, Huntley, Haley Dalton, Natavia Taborn and Icesis Nwafor.

The scouting report on all those girls is that they don’t take many outside shots, but they were coming through.

“That’s kind of the way it’s been all season,” Brice said. “When teams focus on Rachel and Kyla, we’ve got other girls who will score. It’s a team effort.”

The Hornets hit a scoring lull in the third quarter, and when Kate Hollifield made a 3-pointer for sixth-seeded Shelby (16-0), the Lions led 42-31 midway through the period.

“There aren’t many teams that could’ve come back from 11 down against a team like Shelby,” Brice said. “But we didn’t fold. We dug in deeper. We rebounded better, limited them to one shot. We came back.”

“Everyone knows I’m a shooter and they try to take away the 3-point line,” McCullough said. “I’ve worked hard to be able to score in other ways.”

It was 43-39 heading to the fourth quarter. The Hornets were down four, but they had the momentum.

Ally Hollifield made a 3-pointer to push the Shelby lead to seven, but Salisbury came right back. When McCullough surged into the lane for a twisting, spinning three-point play, the Hornets were down 46-44 with 3:17 remaining.

“The key to coming back was not rushing and continuing to play as a team,” McCullough said. “It’s the playoffs and teams get nervous in the playoffs, but we weren’t nervous. We were fighting togeher. We just kept playing defense and running our offense.”

Shelby was playing very deliberately on the offensive end, trying to milk the clock, but McCullough got loose again for a transition layup, and it was 44-all with 1:44 left.

McCullough tied it again at 46-all with 1:33 left before Ally Hollyfield got the last points.

“Great shot by Ally and just  great win for us,” Lawrence said. “We beat a great team.”

On that last possession, Bryant wanted to drive, but when she was cut off, she passed to Huntley on the baseline. Huntley saw an open teammate and got the ball to Gibson. That’s the way the Hornets played. It didn’t matter who took the shot. They always believed their teammate would make the next one.

“Both girls made the right decisions and the right basketball plays,” Brice said. “And if that shot goes, I think we win in overtime. We had momentum after that comeback.”

There won’t be many tougher losses in their lifetimes, but the Hornets (13-2) are young. They’ll be in more big games. They lose Taborn and Jania Bolder, but they’ll probably be even stronger next season.

They appeared to have a ton of depth when the season started, but they were beat up at the end of it. Makayla Noble, the exciting freshman, was out with a cracked wrist. Huntley was playing with a stress fracture. Dalton was only healthy enough to play in the last two games.

“We’ll be back next season,” McCullough said. “Stronger and healthier.”